DID YOU KNOW? GERMANY EDITION: In Germany, the energy content of foods is listed in kilojoules in addition to in calories.

I’ve been in Germany for a little over a week now and I’ve already climbed 509 stairs, taken a four-hour tour down through Rhineland, and traveled over 200 miles by train in a single day. Amazing Race 13, here I come.

My blog entries might be a bit sparse over the next three months due to an inconvenient truth about my internet access. Namely, there are only three ways I can access the internet:

1. The Turkish internet cafe on the corner, for the low, low price of 1,50 euro per hour. However, the upper room always has people smoking in it, and the lower room smells like it sustained flood damage at some point. Still, if there’s one thing that my short, yet harsh life has taught me, it’s that beggars can’t be choosers.
2. My job. However, the computer is supposed to only be used for working purposes, and I’m really afraid of visiting most sites for fear of divulging trade secrets. Also, I can’t really read most of the error messages that come up, and I’m always worried that they’re saying “Your internet has been shut off because you looked up Dan Quayle on Wikipedia!” Then I couldn’t e-mail Sam’s Mom.
3. Mr. Chicken. Mr. Chicken (not Herr Chicken, as you might expect), is a fast-food chicken restaurant that’s about a 10 minute walk from my house. They advertise free wireless LAN on the window, but somehow the only people that ever seem to be in there with laptops it are me and three other Americans I know. Does that say something about American culture? Maybe. Anyway, this is the only way that I’m actually going to be able to blog anything meaningful this summer.

So I spent basically all of last weekend traveling, using plans that we made and maps that we sketched out in Mr. Chicken. On Saturday, we went to visit Koeln (or maybe Cologne) and see what was up there. On Sunday, we took the train to Koblenz and took a four-hour trip down the Mosel River to Cochem, smack dab in the middle of touristy German wine country. Monday was a totally random holiday… luckily, MIT has prepared me for Mondays arbitrarily being declared holidays, so we took that opportunity to spend the night in Cochem with everybody’s friendly German grandmother and visit a castle the next morning. From there, we spent 8 hours on the train so we could see Mainz for like one hour. JUST TO SAY WE COULD.

From all of this, I learned two major life lessons about traveling in Europe.

1. Traveling in a group of exactly 5 people on the Bahn is awesome.
2. Always bring your student ID with you, because you get half off of basically every tourist attraction in continental Europe.

Anyway, you didn’t really read all that. Here’s some pictures of Koeln. 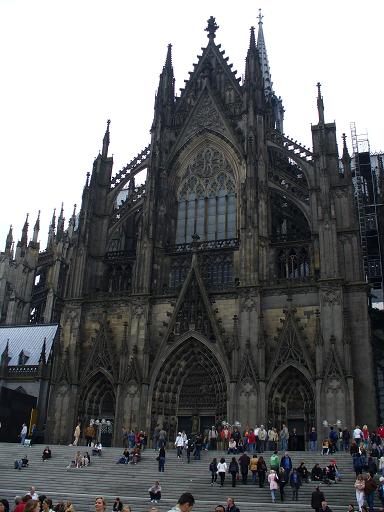 This is the Koelner Dom. It was the tallest structure in Europe until the Eiffel Tower was built. What amazes me most is not that it is so massive and beautiful, but just that this half-a-millenium-old piece of architecture is just sitting there, smack dab in the middle of the city, right outside the train station, and next to, like, a McDonalds or something. I guess you kind of get the same impression with the Old North Church in Boston, but tha’s only like 300 years old, made of boring old bricks, and also like 20 times smaller than the Koelner Dom. Anyway, come to MIT! Because in Boston, you can see something at least five percent as cool as the Dom. 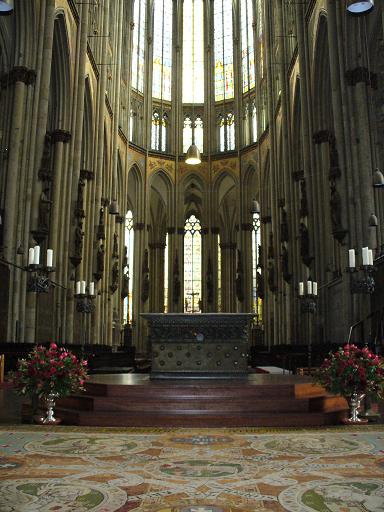 It also looks pretty nice inside. On Tuesday, they’re going to be performing Mozart’s Requiem in there. I’m pretty excited for that, because I sang that last year with the MIT Concert Choir. However, they’re singing the Levin completion rather than the Sussmayr one, which ‘ve heard is actually better, despite being done like 200 years after Mozart’s unfortunate death. 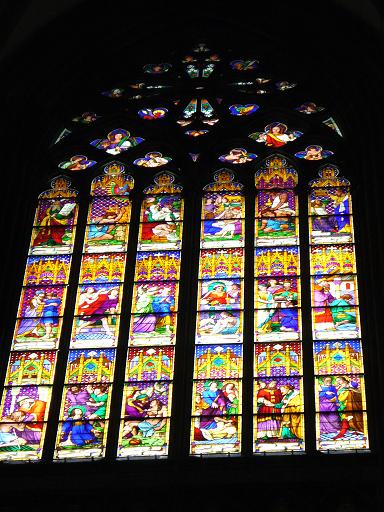 I know that you’ve probably seen a stained glass window before, but I took like 20 pictures of them because they are JUST THAT BEAUTIFUL. I almost felt like an Asian tourist standing in front of the great dome (Class of 2010 readers, you will understand this before too long). I did the same thing going down the Rhine — I was recently going through my pictures and wondering why I spent like half my memory card taking pictures of stupid hills. Stupidly beautiful, maybe. 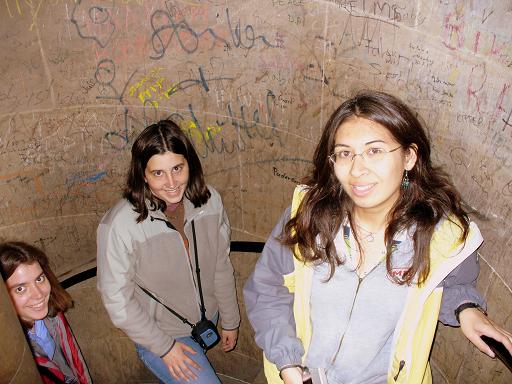 So, for the price of a single euro, we got the opportunity to climb somewhere between 509 and 524 steps to the top of the Koelner Dom. Pictured here are Katy ’08, Vanessa, and Stephanie. It’s a pretty cool experience, but I was disappointed to find out that the whole ascent is basically covered in graffiti, in a wide array of languages. I just couldn’t believe that so many different people from all around the world were so stupid as to write “Te adoro, Anton” or whatever in white-out on a piece of religious architecture. If you ever find yourself in a piece of religious architecture, try not to do that. 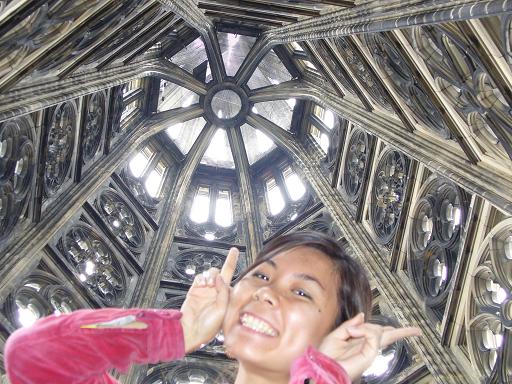 And here’s Ling ’07 at the top of one of the spires of the Dom. The tourist packet said to notice how the architecture gives an impression of frail majesty, or something. So, do that. From near… 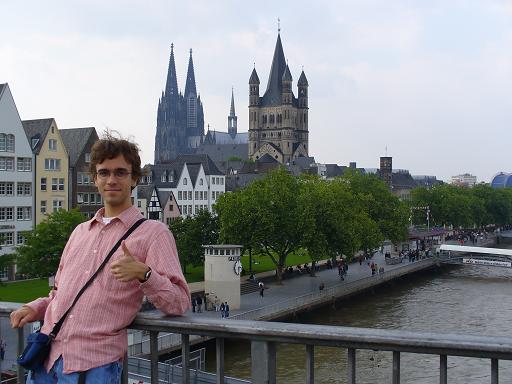 …far, or wherever you are. Once outside the Dom, we heard that there was a Chocolate Museum in Koeln. Now, I was a little skeptical, growing up 20 minutes from Hershey, PA, but let me just tell you, when it comes to chocolate museums… 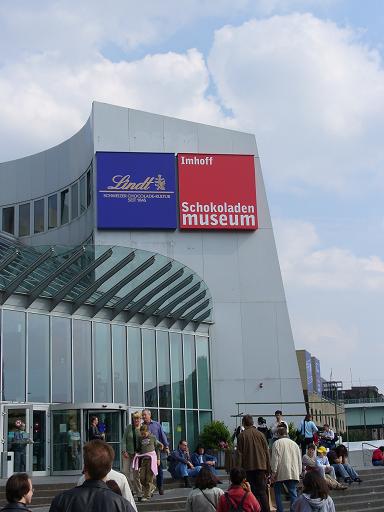 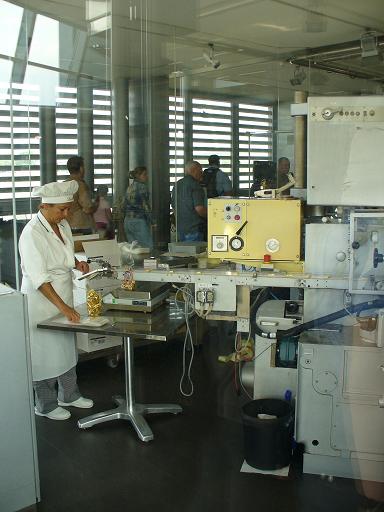 Also, Koeln has women pretending to be making chocolate candies, which was just charming and reminded me a lot of I Love Lucy. 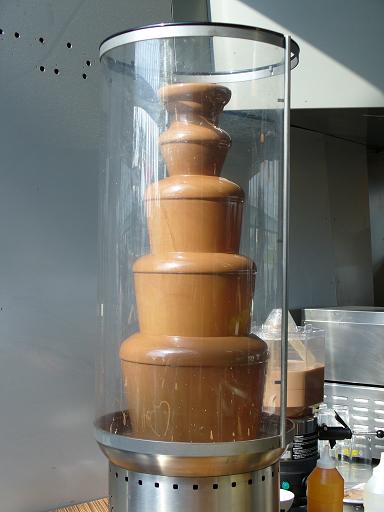 However, I guess the Dom at night might be a little more beautiful. 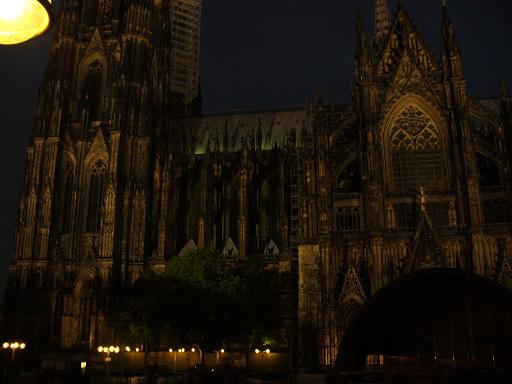 Down on the right, you can see some sort of outdoor theater being set up. I think that when I am a famous rock star, I’m going to play a free concert in front of the Koelner Dom and record a live album. Just because something like this would make a really cool album cover. Also, I could speak broken German to the audience between songs, which would be very cool.

Now, if there’s one thing I learned about Germans, it’s that they love to eat ice cream. All the time. There’s a cheap “eiscafe” pretty much every block, and at any given time I’d say about 25% of the population of the country is walking around with an ice cream cone. Anyway, for a relatively low price, you can even get treats like this one, modeled by Ling ’07. 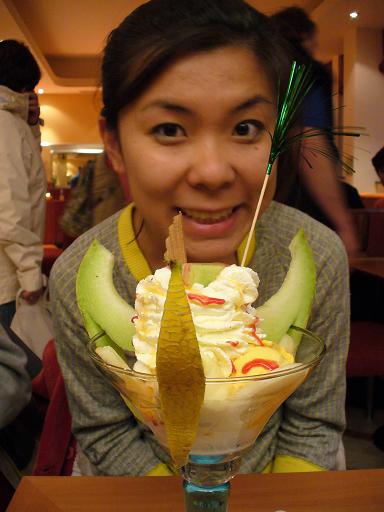 This one sparked a debate about what melon is better — honeydew or cantaloupe? What do you think, gentle reader?

Just so you know, Ling ’07 is going to be in a lot of pictures in this blog, because she’s like the most photogenic person that ever lived and every picture I take with her in it turns out to be perfect in every way — even the non-Ling parts of it.

The above pictures represent like 6 hours of my life. I think I need to find a more efficient way to blog.