Even Waitresses Under 30 Call Me ‘Sweetheart’… by Anthony R. '09

Some thoughts about how classwork and free time intersect at MIT, with a look at two of my favorite courses. 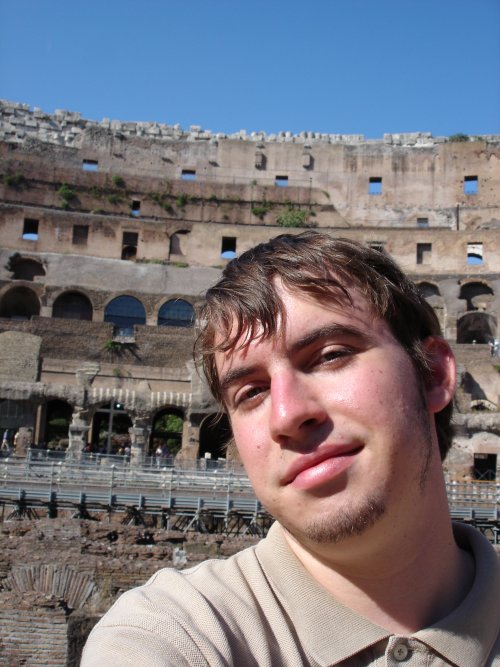 (Hey, I never finished those entries from the summer, so I have to sprinkle the remaining photos in somehow.) ;-)

I was dining in Providence Saturday night, and the waitress serving my table, who couldn’t have parted ways with her mid-20s long ago, kept asking variations of “How is everything, ‘Sweetheart’?” in the manner of an elderly grandmother. I started thinking a bit about age and about what it means to be eighteen, anyway, and what I should be doing here before it’s too late.

Certainly, the first and foremost purpose of going to college is to learn, but I’m torn about whether that means classroom learning, or something else entirely. I’m not terribly interested in the core freshman classes — I mean, really… my life’s work and calling do not lie in the theoretical disciplines of calculus, chemistry, and physics. Heck, my seatmate on the train, Freddie, thought I was a musician at first glance! And coming from what essentially amounted to a two-year break from school, I’m finding that my passions consistently lead me out of the classroom and into projects more applied or practical. Luckily, at MIT, many of the classes you take outside of the core will do this for you anyway. :-)

My advising seminar, 1.A24, has proved to be a worthy contender for most intriguing class this term. We meet for an hour and a half every Monday afternoon to nibble on biscuits and talk about transportation challenges around the Boston area. We’ve examined the various subway lines here as well as historical transit maps from decades past, and we’ve all compared the levels of public transit available in our respective hometowns. Our latest assignment involves measuring the bus service on Massachusetts Avenue to determine the estimated average waiting time for a randomly arriving passenger. Tetazoo hallmate Brian and I set out for the front steps of MIT on Wednesday evening, and counted both numbers of passengers and arrival times for two Boston bus routes. The results gathered by the participants of our seminar will be sent to MBTA executives, who use them for quality control purposes. :-) 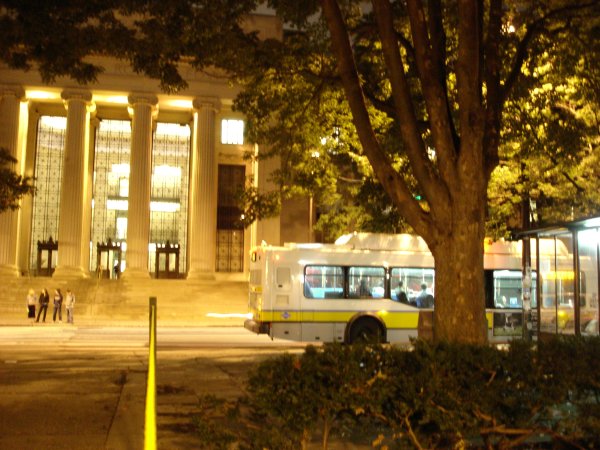 Next Monday, we’ll be going to the MBTA Control Center on a field trip to see how Boston’s subways and bus lines are managed and controlled, and then we’ll have dinner somewhere downtown as a group.

I genuinely enjoy my humanities class, Becoming Digital. We meet for an hour and a half on Tuesdays and Thursdays, and the ten students sit in a circle of chairs with the professor to discuss ethical and social implications of the evolution of media. As it is a writing class, there are about two essays due per month, each with a draft and a revision. Aden, the professor (yes, he insists we call him by his first name, which I think is awesome), returns detailed, very helpful commentary after each submission. Our last assignment involved the consideration and comparison of two images from very different eras, in search of something interesting and provocative they share. From the assignment: “The nature of the comparison is up to you, and the strength of your essay will likely rest on whether you find an interesting claim to make about the juxtaposition of these two images. Whatever you choose to say, you should support your contentions with close examination of the images themselves, offering concise, descriptive language to capture the relevant aspects of the images.”

The images were “New York City” by Robert Frank, taken in 1955, and an image of “Klaus” from Inez van Lamsweerde’s “The Forest” series, from 1995. (Take a look at the other images from “The Forest.”) Forty years separate these images, but we looked at the common questions of gender identity they each raise. 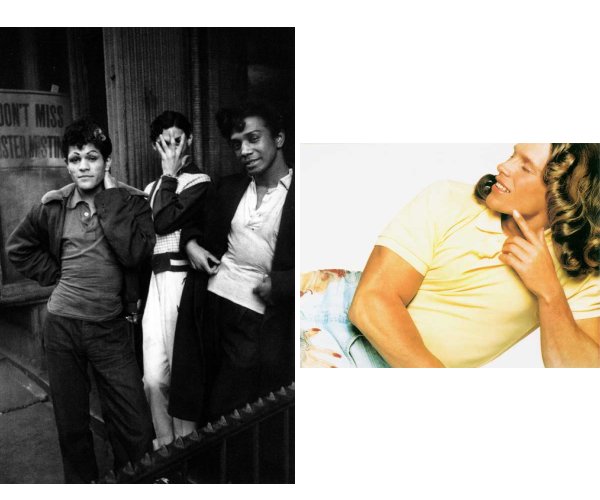 The images in the “Forest” series have been digitally manipulated and include the subtle substitution of female body parts (hands, mouths). What stands out to you when you view these pictures? (Feel free to comment.) We spent several class periods examining and discussing these, as well as other, photographs, and the discourse was always fascinating and insightful.

Our current assignment asks us to examine ethical questions raised by, and in the context of, the Internet. As found on the materials page for the course, we read various articles on topics such as plagiarism, copyright, file sharing, security, pornography, and piracy, and formulated our thoughts both in three-person class groups and in emailed predraft assignments. Many chose to focus on the issues of copyright and piracy, but I picked a different approach: examining the cultural effects the Internet (particularly, chat and instant messaging) has had on interpersonal communication and relationships, and why they present an ethical dilemma.

Here’s how awesome MIT can be. From reading Aden’s comments on my predraft, I learned that a faculty member in our very own Program in Science, Technology, and Society has authored definitive works on the subject. Professor Sherry Turkle‘s books include Life on the Screen: Identity in the Age of the Internet and The Second Self: Computers and the Human Spirit, and she is the founder of MIT’s new Initiative on Technology and Self, which is working to “create a center for reflection and research on the subjective side of technology and to raise the level of public discourse on the social and psychological dimensions of technological change.” Aden pointed me to an exceptionally relevant article by Turkle in Wired Magazine, and I encourage you to give it a read if this topic sounds at all interesting. I’ll likely be checking her books out of the library to use as material inspiration for my essay. (MIT’s libraries have several copies of each available.)

Much of being a freshman here (and of being on pass/no record grading) is finding the equilibrium between what you do in class and what you do out of class. I live on a very interesting and active hall in East Campus, and if I’m ever not doing homework, chances are people are both awake and doing something compelling. Yes, that’s right, I don’t think there is one hour of the day when less than two or three people are up and around. And with all that Boston (and the region) has to offer, spontaneous subway rides to and fro, events I learn about through the email, and requisite mealtime jaunts, it’s difficult to find much free time to speak of. This phenomenon has somewhat negative consequences of productivity.

First of all, it leads to less studying and homework time, which directly translates into markedly lower exam scores. I can’t stress enough that time management is every freshman’s gravest folly. Even if you have the good sense to conduct yourself in a legal, moral manner away for the first time from parental supervision, you’ll probably still have trouble managing all of your new stimuli. I know I am.

Second, any long-term projects or commitments you thought you’d freely continue after coming to MIT tend to [at least temporarily] lose the personal significance they once had. The amount of activities and opportunities here is overwhelming. Some personal examples? I’m carrying my job forward on a limited work schedule throughout the term, and it’s been difficult to juggle that along with everything else (though this will change as I further refine my schedule and time management this month). I was working on a train schedule archiving project as a personal endeavor, and that’s been pushed back, too. My room’s a bit disorganized, my online time has markedly decreased, and my priorities are generally transforming with each new week. Is it possible to juggle outside commitments, like a job, alongside your academic obligations and everything else? Yes, but you need to be disciplined and devoted to making it work. I think I read once that the average working MIT student spends nine hours per week on his or her job. That’s probably a suitable amount if you’ve got your time management in check, which I don’t, yet.

As if to encourage the culture of procrastination :-), my hall has a tradition of cooking things in the kitchen for consumption by the residents at large, often during times of study. I suppose it’s a way for the people cooking to put off work, and the end result is a way for those eating to put off work. Whether it’s someone’s birthday and there’s a cake, or whether it’s just any old day and someone’s making cookies, it’s a tradition to run up and down the hall yelling “pancakes!”. This summons students hard at work from their chambers and into the Goodale lounge and kitchen for some victuals of great promise. 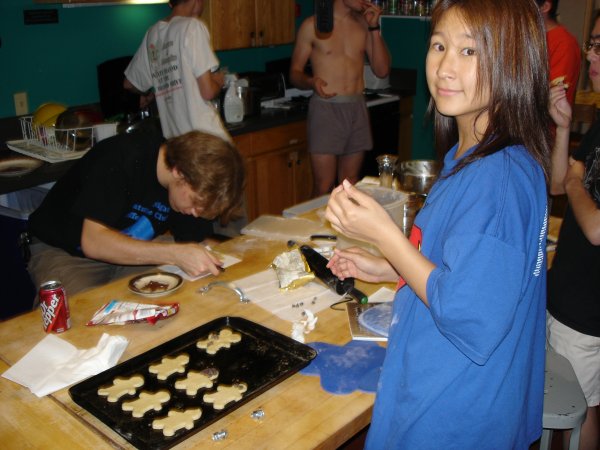 In the image above, freshman Stephanie and sophomore Rod are dealing with some baking concerns while senior Kevin thoughtfully munches in the background. A shirtless Nick, orange Caltrans shirt-sporting Ryan, and a couple of others complete the scene. And yes, this occurred while I was writing this entry, hence the inclusion. ;-)

So what are we really supposed to be learning in college? The practical skills with which we’ll secure a lucrative job upon graduation? Or are we really here to forge a better understanding of who we are, using our time and effort in class to steer us toward the rest of our lives? My idealistic side favors the latter, and I suppose I’ll trust my instinct and continue to explore. After all, that’s what I’d do anyway, even if I weren’t at MIT.

7 responses to “Even Waitresses Under 30 Call Me ‘Sweetheart’…”