everything is actually going okay by CJ Q. '23

and i think that's pretty cool

I’m sick of all this, “How’d you get your band name?”
“Is that your real first name?”
“Can you text and can you follow back ’cause it’s my birthday?”
No one cares what I want, just what I’ve got
And if we sit and count it up, it’s really not a lot

i don’t really have anything to complain about right now, because i feel okay about everything.

for example, i’m usually really self-conscious about how often i make blog posts. my ideal is to make a post once a week, but i’ve been slipping on that recently, because blogging has taken a backseat to the other things in my life. in my mind blogging is either one of two things: a way to vent, and a release from whatever negativity i feel, or a way to sink free time, to pursue things i find interesting like doing history research or whatever.

but right now blogging isn’t doing that because first, i don’t feel bad right now. like, at all, i guess. things are okay. things have been okay for a while now. i go to bed and wake up at reasonable hours. i enjoy things like playing spirit island or playing video games or reading books. i go out with friends and have fun with them. i’m on top of my work, and i don’t want to kill myself.

on one level it feels concerning that i don’t feel very depressed, because oh no, this was such a big part of my personality! again i’m reminded of the ideas from this post:

what if i don’t want to feel better? what if i like feeling bad so i can keep getting all of this attention? these thoughts have always felt like they kept me grounded, in a sense, so what if i overshoot, what if i adjust too much in the wrong direction?

i think one thing that has helped me is honestly kind of accepting that there is no radically different version of myself that is magically happy? no amount of therapy will ever make any feelings or thoughts completely go away (though you probably know that).

but you give some you lose some, or something like that. on the outside i’m doing less work, but on the inside i feel okay about myself.

so if i blog to either vent or pursue interests, then the second reason that i haven’t been blogging is that i’ve been occupied with other things. what other things? you might ask. well, here’s my first-ever “yeah this is all the things i’m doing this semester” post, mostly prompted by a comment i made on alan’s post.

okay, that’s it. that’s all the things i’m doing this semester. haha, no, just kidding. in the post it’s cool to care, i talk about all the non-class things i’m doing this semester. i don’t want to rehash the post, but the tl;dr is that i’m a floorpi hall chair, i’m the tech squares publicity officer, i’m the assassins guild grandmaster, i’m an admin for the educational studies program, and the president of the filipino students association, and also webmaster for the puzzle club, and i go to sipb meetings.

so yes, i am doing a lot of things. and it’s not as if this semester is unusual; many of my semesters have been like this. i’ve just never really written about it on the blogs because it feels… shameful, in a sense, to admit this. to so flagrantly violate my own advice to not do too many things a smester.

and i want to surround this section in caveats, saying that this is by no means what the median mit semester looks like, and that this shouldn’t be thought of as an example to follow. but is there really a point to saying that? i feel like there’ll always be people who will overwork themselves, no matter how much you tell them not to.

i guess alan has a point. it’s important to be honest, i guess.

I miss having sex but at least I don’t wanna die
Anymore, and I think that’s pretty cool
I miss seeing the red on your face when I made you blush
But I think it’s fine, it’s cool

i’m not depressed, sure. but there are some things that have been on my mind, and i want to think about these things starting from the meta-level, before going into the object-level.

i think this song exemplifies how i feel about this: i miss having sex but at least i don’t wanna die anymore. i don’t wanna die, sure. i’m not expressly depressed or suicidal or anxious. but it seems to have come as a trade-off, somewhat. in this song, i guess awsten is riffing off the fact that a common side effect of antidepressants is decreased libido, but that’s not really what i feel, since, you know, i’m asexual.

instead, i feel like the tradeoff is more… fundamental. not on the level of medication or physiology, but with respect to the things that have been occupying my mind. now that my thoughts aren’t focused on being sad as much, they’ve mostly been occupied on things like work, or playing games. which kinda leaves this somewhat empty, numb feeling.

it’s not feeling better. it’s feeling okay. i don’t feel good, but hey, at least i don’t feel bad either! and now this reminds me of a line from the geeks’s i don’t feel anything, which goes i’m so used to disappointments / i won’t be upset, it’s pointless. it feels okay, and that lack of feeling makes me feel… okay. not distressed or sad. just, okay.

and it’s weird, because i’m not sure how much this is an improvement. i’ve always fancied myself as wanting to live intensely, of being romantic and passionate, because it’s better to ride lows and highs than stay in the middle all the time. certainly the way i feel right now looks like a straight line, but i’m not sure if the way i felt before was really ups and downs, or just downs and slightly less bad downs. 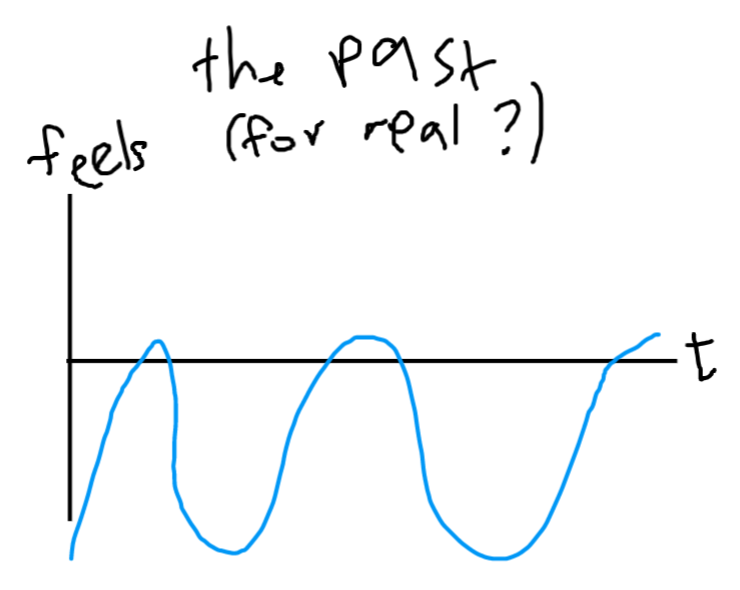 My hobbies include
Pushing away these girls that maybe really like me
Cutting people off because I don’t trust exciting
But what the fuck have I done?
I’m not even an icon
But I still get death threats often
So their meaning starts to soften

and on the object-level, the thing that i’ve been feeling is one of homesickness. i’ve talked about home in the past, remarking that it’s a strange feeling to be homesick for a place that isn’t home. but now that i think about it, the feeling of homesickness isn’t really about a place. you’re homesick for people.

i have this ideal vision of what floorpi should look like in my mind, the way it was in fall 2019, when i first came to mit. i have halcyon memories of playing board games every night, having tea and talking about our feelings, doing silly things in the lounges and hanging out with people. and now, floorpi is no longer like that.

not to say that floorpi right now is bad. no, because we’re still playing board games every night, we’re still having tea and cookies and fruit, we’re still doing silly things in lounges. the people are different, though. the details are all different. so the experience is different. and it somehow feels less enjoyable than what i remember it to be.

i want to say that maybe it’s just me—that maybe i’m just misremembering how good it felt, or that i’ve just gotten old and jaded and the things that i enjoy no longer feel enjoyable. but that doesn’t feel quite true. when i visted next for thanksgiving this year, it felt like a very long and fun afternoon hanging out with people, one that i haven’t had in a long time.

i’ve always felt this conflict about east campus and next. floorpi, and east campus by extension, is my home, and has been since i came here, and i’ve thought of it as home, and i call it home, and i tell my friends it’s my home. i love all the people on floorpi very dearly.

but whenever i visit next, it also feels like it could’ve been home. that if i just made a single decision differently two-and-a-half years ago, that if the coin flip landed different and i ended up on the west end of campus rather than the east end, i also would’ve enjoyed it. i keep wondering, would i have liked it more? and in some sense it’s silly to ask that question because i’ll never know the answer.

with respect to homesickness, i miss a lot of the floorpi alums, and all the people who used to live in floorpi. almost everyone on the hall is new, and we have a large proportion of sophomores and frosh. i can count on one hand the people who live on floorpi, who also lived here in fall 2019. and that’s not to say that i dislike the people who are here now—they’re great, and i love them, and i love hanging out with them, and i would gladly call many of them my friends.

but the feeling i get when i hang out with them is fun, and not as much comfort. on the other hand, visiting next feels like seeing a bunch of old friends and getting to hang out with them. in that respect, it is less fun, but more… comforting.

and it’s not as if i can’t be a part of both; i’m reminded of joon’s post:

I lived in East Campus for a year, on Fifth West, which is a wonderful hall filled with cats and friends and midnight tea and cheese and cookies[…] I made a friend at Next House, and spent time there until I made more friends, enough to convince me to move, enough to start my second year here on 2E. I really like it here – mainly because of the people who live here, and the silly things that we do – but it’s different from EC. […] Either way, I like spending time at both places. I’m happy that I have two different places where I fit in.

phew. sorry for the stream of consciousness posting. i just needed to get these thoughts in writing. maybe i’ll actually edit the next thing i post.

the small comfort in all of this is how the song ends, with but i think it’s fine it’s cool, repeated a dozenish times. the comfort is that if awsten eventually found it cool, then maybe i will too. that all these other people, like sabrina, alan, or joon, have gone through something similar. and that hopefully, i will too.