Fall term is already a nightmare by Lulu L. '09

Today I went to my second day of classes.

Loved Rhetoric with Strang. I can say that now because I got my name picked out of a hat to stay in his class. If I’d known it would come to this I’d have definitely had a freak-out or two before going to my only HASS-D and writing course, required for both graduation and my writing concentration, sitting through an hour and a half of lecture without being registered for the course getting really excited to be there only to find out that about 30% of us were going to be kicked out of the class by the end. This, I never picked up on, because throughout the last 1/3 of the class I was busy composing an email to the head instructor of Junior Lab this term. OMG why? What do I still have to do with that class? I actually had plans to be a TA this term. But due to the upheaval of my schedule and the deluge of conflicts that has been the weather of late, I’m unable to fit the last open section into my schedule.

You know how sometimes 2 days can feel like 2 weeks? I felt that the first 2 days at Burning Man. We spent those days building an unreasonably complicated sleep structure in constant, intermittently blinding dust storms. I’d look up and the desert landscape would be so familiar to me, even though on the first day I could swear we were on mars, and I just couldn’t believe it’d only been 48 hours since I was just sleeping in a bed and feeling clean after a shower. My skin was caked with dust and I dug out heaps of sand from my nostrils like I’d just risen like Jesus up from the desert grounds. 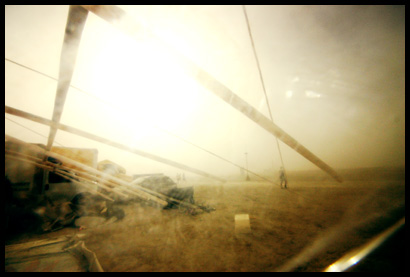 Well, that’s not a feeling you often get. Yet only a week later here I am just in complete disbelief that it’s only been 3 days since I arrived back at MIT and started dealing with all the conveniences bought by inconveniences of the world I’d left behind. Let me explain. It’s hard to miss the week before classes. All the fun rush events and free food notwithstanding, this is when you get your shit together for the semester ahead. Having missed that opportunity I’m still scrambling. Keys and bills and painting and wiring and unpacking still from moving so late in the game all the loose ends from the summer that I left dangling, now woven into a mesmerizing web just heavy with the promise of sleepless nights. Migraine days. 2 days filled with so many problems that it seems the only sure thing in my life is more problems.

I attended 8.351, the Computational Classical Mechanics course, and it promised to be a great class. And since every great class must have some way of conflicting with my HASS classes (which are already in conflict with each other), its once a week lab is held at the same time as both those classes, down to the last second. It already conflicted with 8.07, another class I wanted to take, so I figure this meant that someone somewhere was trying to tell me not to go through with it, I just can’t imagine a class laying such an egg in my schedule accidentally. So, I dropped it. I also dropped Nonlinear Dynamics, due to its almost insulting lack of rigor. I had high hopes for that class. Instead I picked up 8.07 and 8.09. 8.07 (E&M II) because of GR next semester, 8.09 (Theoretical Mechanics) as the replacement for 8.351 and as a second technical subject. The 8.09 lecturer was surprisingly good. I picked up rhetoric by a rare stroke of luck, and I was finally starting to have a schedule.

Then I found out that all 8.07 recitations (2-3, 3-4 Thursday) occur during 8.09 lecture (2:30-4). No problem, says the recitation instructor, I’ll just add an earlier recitation, 1-2pm on Thursday. You see, it’s a kind gesture, but I have nothing on Mondays Wednesdays and Fridays. My schedule is a barren wasteland. And I have nothing before 1pm on Thursday or after 4pm. But I have class between 1 and 4. Rhetoric, my HASS-D, which if you recall was a miracle for me to get into, followed by 8.09. A solid block of 3 hours into which all 3 8.07 recitations fit so snuggly that it would have made me laugh in astonishment if it did not make me cry. I was assigned to the Tuesday/Thursday 2-5 section of junior lab. I showed up at 4pm to apologize to the professor for my situation. I wrote to the 8.07 recitation instructor asking for another time, any other time. I don’t know what I’ll do about that class if this is how it’s going to be.

Update! This is how it’s going to be. Prof Belcher’s schedule does not permit another section. I will be unable to attend any 8.07 recitations. He’s offered his office hours as a consolation, but I don’t know how much I will get out of this class missing 1/4 of it every week. I may drop to Junior Senior P/D/F.

I just did 4 loads of laundry. Filthy shoes and filthy bags and a full dust-covered 10-day wardrobe. Plus all the laundry I left in the hamper when I left for the west coast cause I was busy packing then, and I figured, well, I’ll just do it when I get back, when I had time.

9 responses to “Fall term is already a nightmare”