A question inspires an entire entry about housing. But I threw in some other stuff too. Like pictures. Yay!

News updates: IAP is over! This is sad for most people, but happy for me, because I’ll actually be attending FEWER hours of class once the semester starts. Of course, there will be those pesky things known as psets, but hey- you win some, you lose some. Anyway, this means I finally finished my EMT training! Yay! Of course, I still have to take the state certification exam in a couple of weeks, so wish me luck. In other news, April and I got a futon, and now our room is supercool. Pictures to come soon! 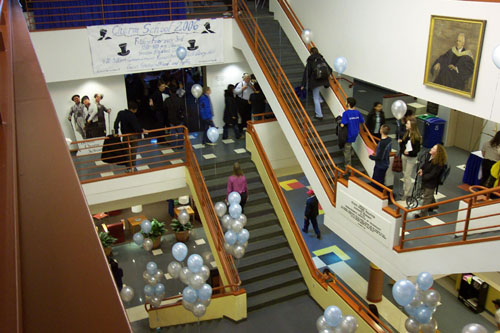 The very first session I went to was “How to tell someone something they’d rather not hear.” We started with the example of how to tell someone who has a crush on you that you don’t return their feelings. Useful stuff right there. Then I checked out the session on dating etiquete, because it was run by Laura Staurt, who I’ve mentioned once before. Her nametag said: “Laura Stuart- Sex Lady.” Because that’s what she is. Seriously. She’s also supercool, and gave a really awesome presentation with such useful tips as do’s and don’ts for a first date. She also had plenty of flyers and pamphlets about dating and sexuality. 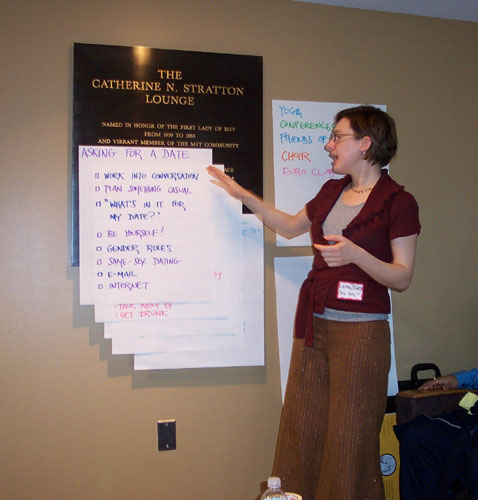 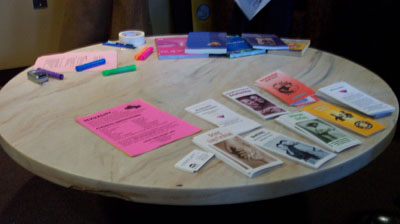 Then I went to Flirting 101, because I could. I mean, how can you not? All of the girls got together and made lists of what they did and didn’t like about the way guys flirt, and the guys did the same about girls. Ahh, how the other half thinks. It turned out to be a really interesting sociology discussion about gender roles and stereotypes in flirting and dating. After that I went to a session on Interviewing Techniques, which is useful for everyone. I saw the table manners session that Bryan mentioned, but his pictures are better.

In the end, I learned enough to receive a…. 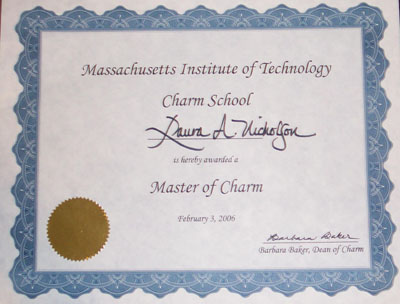 To answer your question- yeah. I do feel pretty lame now.

But there was a commencement ceremony and everything!

Margaret Shepherd, author of The Art of Civilized Conversation and The Art of the Handwritten Note was the commencement speaker. 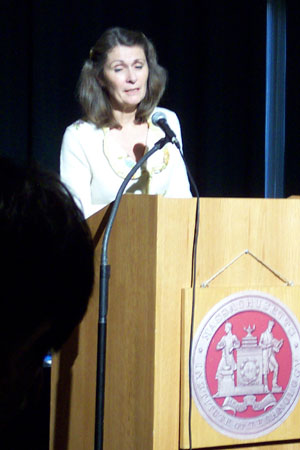 And the MIT Chorallaries performed for the graduates. 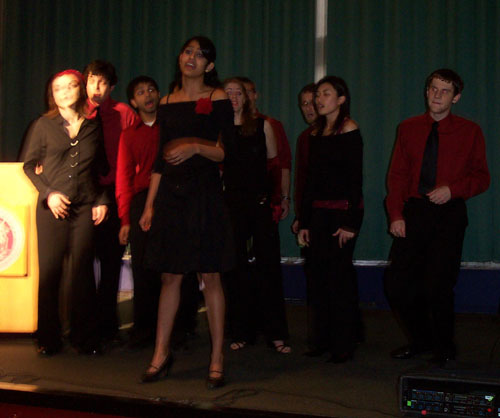 As Bryan said, they welcomed the Charm School “graduates” by playing “Pomp and Circumstance” on the kazoo.

Sometimes I think the people here are more than a little crazy. =)

Responses to comments:
Arturo: Hey! About literature in Spanish… all the admiration I had for you, Laura, went away as your duct tape residue did, when you said Cortezar is sci-fi… Cortezar is one of the best things to have happened to literature in Spanish!!! It’s ‘realismo magico’ as well!!!
OK, so maybe it was a poor choice of words. Keep in mind I was mostly thinking of “La Noche Boca Arriba,” which you’ll know is a pretty crazy story if you’ve ever read it. Besides, sci-fi isn’t an insult, so relax!

Lindley: hey Laura! you called me on the telethon. when u called i was just about to eat dinner and then go to fencing practice so sorry if i was a bit…rude/standoffish. so my mind kinda went into the “blank, what in the world am i supposed to do ri now” mode since i did have some questions 4 u about MIT but had to get in gear and out the door. btw I am so jazzed about CPW!!! back to questions, how did u choose ur dorm? i read the blurbs from ea. of them on the MIT residence website and assume there’s somekind of freshmen musical dorms thing or something but ya… what’d u think of em’ each? and erm if i have any more q?s i’ll be sure to ask.
THNX mucho.
Wow. You asked a pretty big question right there. Let me see if I can cover it all. Get comfortable. The whole process goes like this:

You come to CPW. (This is optional. It’s not necessarily the official start of this “freshman musical dorms” as you call it, but it can certainly be a useful starting point.) You fill out a little questionaire about your interests and hobbies, and then admissions does an awesome job of matching up you up with a host based on your personalities. (I say this from my personal CPW experience.) You stay with this host during CPW, wherever that person happens to live- this includes fraternities and sororities, even though these are not living group options for your freshman year. So you stay with this person, live in their dorm, check out all the facilities, and get a pretty good feel for it. Meanwhile, among the 500 other things going on during CPW, there are more dorm tours than you’ll know what to do with. Plus, many of the dorms will host all kinds of activities- ice cream socials, free food, game nights, free food, other fun stuff, and more free food. The tours give you a chance to see what the dorms actually look like- how big the rooms are, where the weight room is- all that fun stuff. All the other activities give you a chance to meet the people from each dorm, so you can get an idea of what each dorm’s personality is like- and trust me, they each have their own. (I seriously think I’m forbidden upon pain of death from answering any questions about specific dorm personalities, because you’re supposed to figure it all out on your own. It’s all part of the process.)

Then you go back home and feel really depressed that you have to spend another 3 months in high school now that you’re so psyched about college. Sometime over the summer, MIT sends you a big old packet of information. It has all kinds of goodies in it- information about advising, health insurance, a really annoying math diagnostic test they mak you take, and lots of other stuff. Of course, the most exciting piece of the whole package is the i3 video. i3 (sort of) stands for “Interactive Introduction to the Institute.” You’ll get a big booklet that covers each of the 11 undergraduate dorms (plus the 4 cultural houses). There are pictures of what the dorms look like and descriptions of the people who live there. Inside that booklet is a DVD with a 5 minute video for each dorm produced by the dorm’s own residents. (You can see last year’s videos here.) The videos in general include people acting like idiots running around their dorms with video cameras, yet they’re still a lot of fun to watch. (Except for EC’s. Theirs is kind of different.)

OK, so you’ve visited a bunch of dorms during CPW, devoured all of the videos and glossy pictures. Now what? Now you fill out a preference sheet, where you rank all 15 living options according to your preference, and send it off to MIT and hope you get your first choice. A few weeks later, MIT will post the results of the initial summer housing lottery online. The good news is that most people get one of their first few choices. I think this year some ridiculous percentage (90-something) of freshmen got their first choice. The bad news is, you’re still not done yet.

Now you show up on campus in August for Orientation, and you check in to your initial housing assignment. Then, somewhere in between taking campus tours and discussing how to handle roommate problems with your orientation leaders, this crazy thing called REX (Residence Exploration) happens. REX is a lot like CPW, only now you’re a student.

You get to live in a dorm (your assignment from the summer lottery), check out all the facilities, and get a pretty good feel for it. You’re testing it out to see if you like it as much as you thought you did. Meanwhile, all of the dorms will host all kinds of activities- tours, free food, ice cream socials, free food, crazy parties, free food, game nights, free food, other fun stuff, and more free food. Again, you get to check them all out and compare them to where you’re living now. After the whirlwind adventure that is REX, things happen really fast.

By some deadline, you’re required to do one of two things online- you can either confirm your current housing situation, or you can enter the housing readjustment lottery and list several options you’d prefer to your current dorm (up to 5, I believe). Some people will get their second choice dorm over the summer, go through REX, and decide it’s still only their second choice. They can request their original first choice dorm again- so they get a second shot at it. Other people might get their first choice over the summer, go through REX, and decide they really like their original second choice better, and submit that. Other people (like me, for example), might get one of the two dorms they tied for a first choice, realize they have no idea what they were thinking when they chose the other one (which they thankfully didn’t end up in because they probably would have hated it) and then go through serious conflict over whether they should attempt to transfer to what was originally their 9th choice dorm. It’s a crazy time, I gotta say.

Anyway. So one night, you submit your readjustment preferences. The next day, the results come out- this is (finally!) where you will actually live freshman year (unless you transfer later, which is a totally different topic!). Then you show up at that dorm, where the housing representatives give you instructions on floor rush. You spend the whole day going through the fun activity/free food routine from above, only this time you’re trying out the different floors/halls/entries of the dorm. Then you fill out yet another preference sheet listing your favorite floors/halls/entries. You go to sleep, and when you wake up in the morning, you have a floor assignment! You go to that floor, where you go through another elaborate process (mostly just peaceful discussion mediated by rock/paper/scissors) to decide who will live in which room with which roommates. Then every single freshmen moves all of their junk across the entire campus/dorm/floor as applicable. Then you paint/rearrange/unpack/decorate as you see fit.

Whew. I bet you got more of an answer than you bargained for, huh? =)