Maybe the time is right (to blog). Maybe tonight.

DID YOU KNOW? Takeshi Kaga, the flamboyant chairman from Japan’s Iron Chef, originated the role of Jean Valjean in the Japanese production of Les Miserables.

If you own the 10th Anniversary Concert DVD, you can see him in the “Valjeans of the World” medley at the end. It always struck me as kind of odd that they picked “Do You Hear the People Sing?” as the song for this medley, since that’s pretty much the one song in the entire show that Valjean never sings at all.

I was Javert in my high school’s production, remember.

I will get to posting integral answers soon! Based on a comment I got yesterday, there are still people working… and I don’t want to spoil the fun.

By the by, I found out the average on that 10.302: Transport Processes final from last year that I was so worried about. It was a 68.

Speaking of things that have mutilated me recently, I posted the much-requested “before” picture in my last entry. Given the locations of our cuts, I would say that thekeri and I are now hand twins.

That is the only episode of “Friends” that I have ever seen all the way through. No lie.

But onward to business. Today was the second day of classes and I have now had every class in my schedule at least once. Here are my initial thoughts and impressions a la last semester.

6.002: Circuits and Electronics — I don’t know much about circuitry, and there are enough things marked HIGH VOLTAGE in my UROP laboratory that I think it might be time to familiarize myself with some of it. On thing that’s strange about taking this class is being in a class with more males than females–since the gender ratio in Course 10 is about 1 male for every 2 females, I sometimes forget that the actual MIT gender balance is closer to 53-47 or something like that.

10.26: Chemical Engineering Project Laboratory — YES! We had 15 projects to choose from for this class, and I got one of the two advised by Professor Virk. I love Professor Virk. He would wear a North Face jacket to class every day for 10.301: Fluid Mechanics. Inevitably, he would find it a little stuffy in the room and remark, in his unbelievable Indian accent:

“Oh, I think I must take a page from the book of NELLY! Because it is getting HOT in HERE!”

We thought this was the only thing he knew about modern music, but during one recitation, after taking off his jacket, he surprised us with:

“Ha ha ha, were any of you watching the GRAMMYS last night? I must say, NELLY was not doing so HOT out there! Most of the awards were going to Mr. USHER!”

No lie. Later he explained to us that since coming to America, he has always learned new English expressions through popular music, starting from The Beach Boys’ “Help Me Rhonda” and continuing up to the present day.

Anyway, our project involves polymeric additives in the Trans-Alaska Pipeline, and my three-member group is already quite ambitious (“Let’s do a really good job on this; maybe we could get our name on a publication!”). However, another group gets to explore the heating of Subway sandwiches in an industrial oven. As Paris Hilton would say if she were a little more clever (and not paid to endorse Burger King), “That’s hot.”

10.37: Chemical Kinetics and Reactor Design — Most classes at MIT are 12 units (corresponds roughly to a 4 unit class at other universities; you’re expected to spend about 12 hours on the class between studying and written work). From class today, paraphrased:

Student: “Why is this a 9-unit class? How does it compare to 10.302 [a 12-unit class]?”
Professor: “Well, basically the only reason is because Course 10 exceeded the credit limit for the number of credits you could require for an undergraduate major, so we had to pretend we were cutting out 3 hours somewhere.”

21F.402: German II — I was hoping for a little review of German I, but no such luck here. The first chapter is about recycling, and I have already learnt such useful words as umweltfreundlich (“environmentally-friendly”). I’m really excited about learning from somebody whose first name is Dagmar. Dagmar!

21M.401: Concert Choir — It should be another fantastic semester; we’re doing Brahms’ German Requiem and the whole choir gets to go to Switzerland as part of a “choral exchange program!” Unfortunately, I’m already going to be in Germany at the time, so I probably won’t be able to attend. The ironing is delicious.

Also of note: WILG, the Women’s Independent Living Group gives out free cookies on the first day of classes. Because they are awesome. 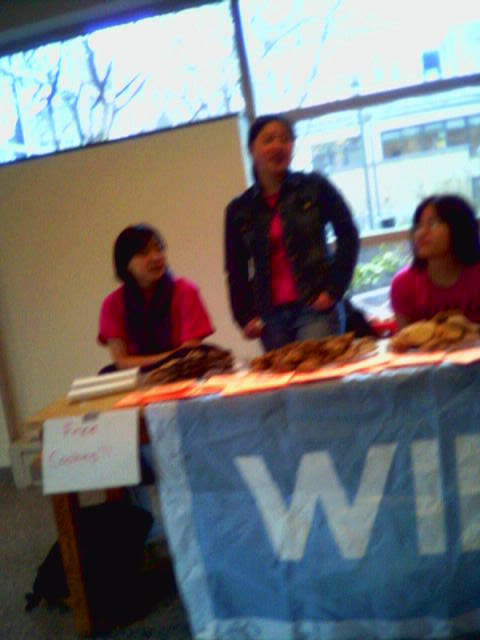 Legend has it that many years ago WILG and some fraternity, let’s say Zeta Psi, had a cook-off/eat-off competition. WILG would cook something, and the 40-ish men of Zeta Psi would have to eat all of it. WILG would win if they could cook more than Zeta Psi would eat. Undaunted, WILG prepared one thousand chocolate chip cookies. I don’t think Zeta Psi ever spoke of the incident again.

6 responses to “I will begin again.”