The joys of web development by CJ Q. '23

or: how i learned to stop worrying and love the web

Two years ago, I wrote a blog post saying

Web development probably isn’t for me. I’m not entirely excluding the possibility. […] But JavaScript really doesn’t vibe with me, and thinking about asynchronicity and promises is kind of annoying, and I enjoyed programming more when I’m not doing it in JavaScript.

Well, that ended up changing. Over the past two years, I’ve written things in JavaScript and TypeScript, to the point that TypeScript is now my favorite programming language. What happened? The short answer is that I discovered the joys of web development. The long answer is this blog post.

Here’s six projects I worked on some time during the past two years, in order of when they happened. Of course, these are all ramblings of an amateur, and your experience is likely entirely different, and that’s okay. My goal is to encourage you to reflect on your own experiences, so I’d love to hear your thoughts.

1. The project I hated 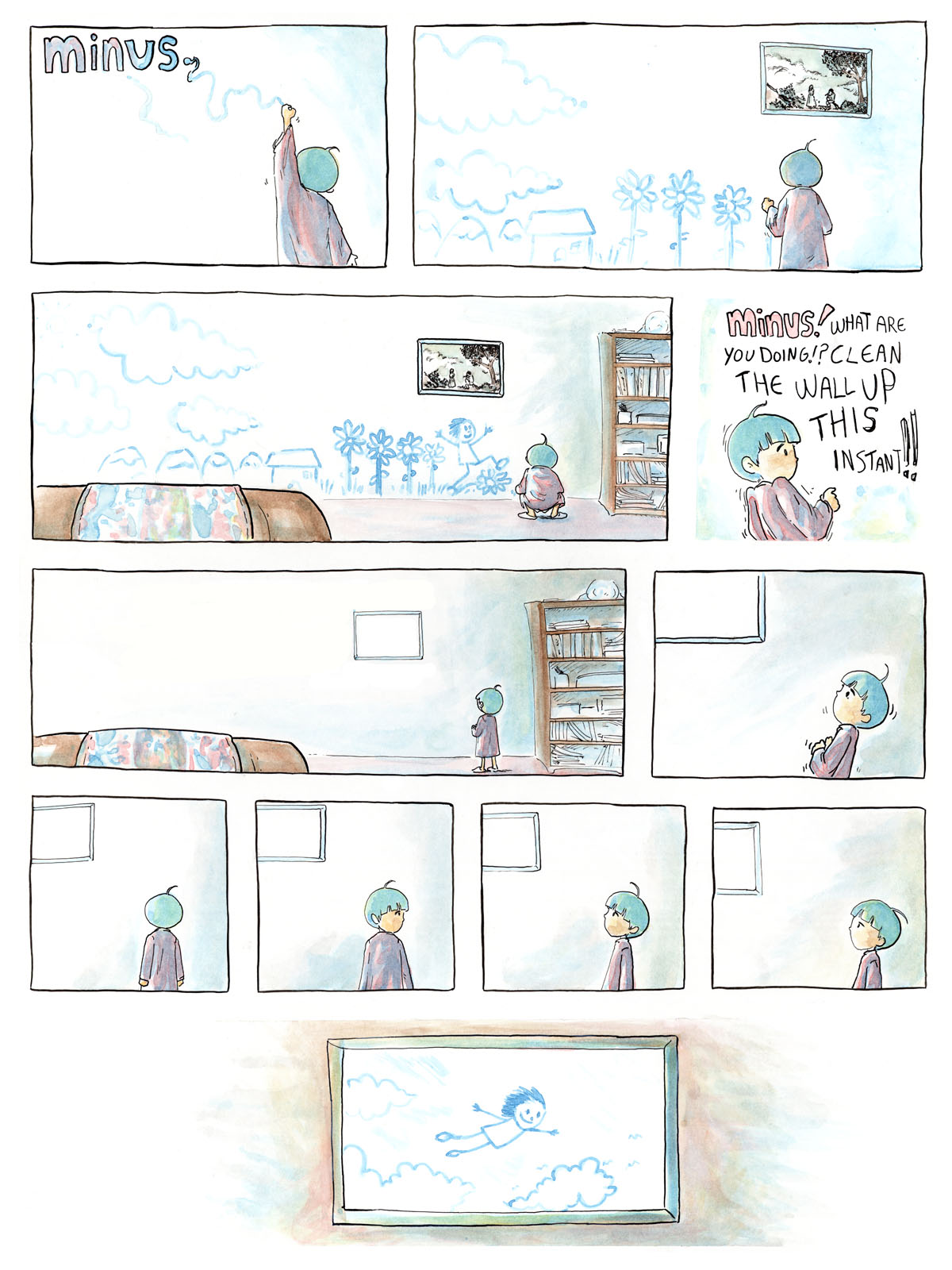 The comic strips are taken from the webcomic minus; this is strip 8.

After my first year, I took a UROP⁠01 MIT's Undergraduate Research Opportunities Program. under the Computational Psycholinguistics Lab. Our project was about collecting sentence completions from participants. My actual job was to work on the app used to collect data. It’s technically full-stack development, but most of the problems I dealt with were front-end facing.⁠02 Web development is usually split into front-end and back-end. Front-end focuses on the parts of the website that you see, and back-end is everything else; full-stack refers to both front-end and back-end. How do you design an interface that makes participating actually fun?

The project was interesting, and I was certainly interested in it… in theory. In practice, I spent two months working on the project, and I didn’t have a lot of fun. I kinda wished that my project was about how to make my participation fun. Then I thought, well, why shouldn’t that be my project? Why shouldn’t I care about having fun on what I’m working on?

I looked at all my previous projects and started chucking them into bins based on how much I liked them. The UROP was bad, the web.lab project was okay, and so on. I learned that:

The UROP I did—that one project I disliked—was the first project I intentionally reflected on. I knew I disliked doing it. At the time, I couldn’t pinpoint the exact reasons why. But over the next few months, I worked on more things and thought about more projects, and eventually, I figured out what I disliked. And more importantly, what I did like. 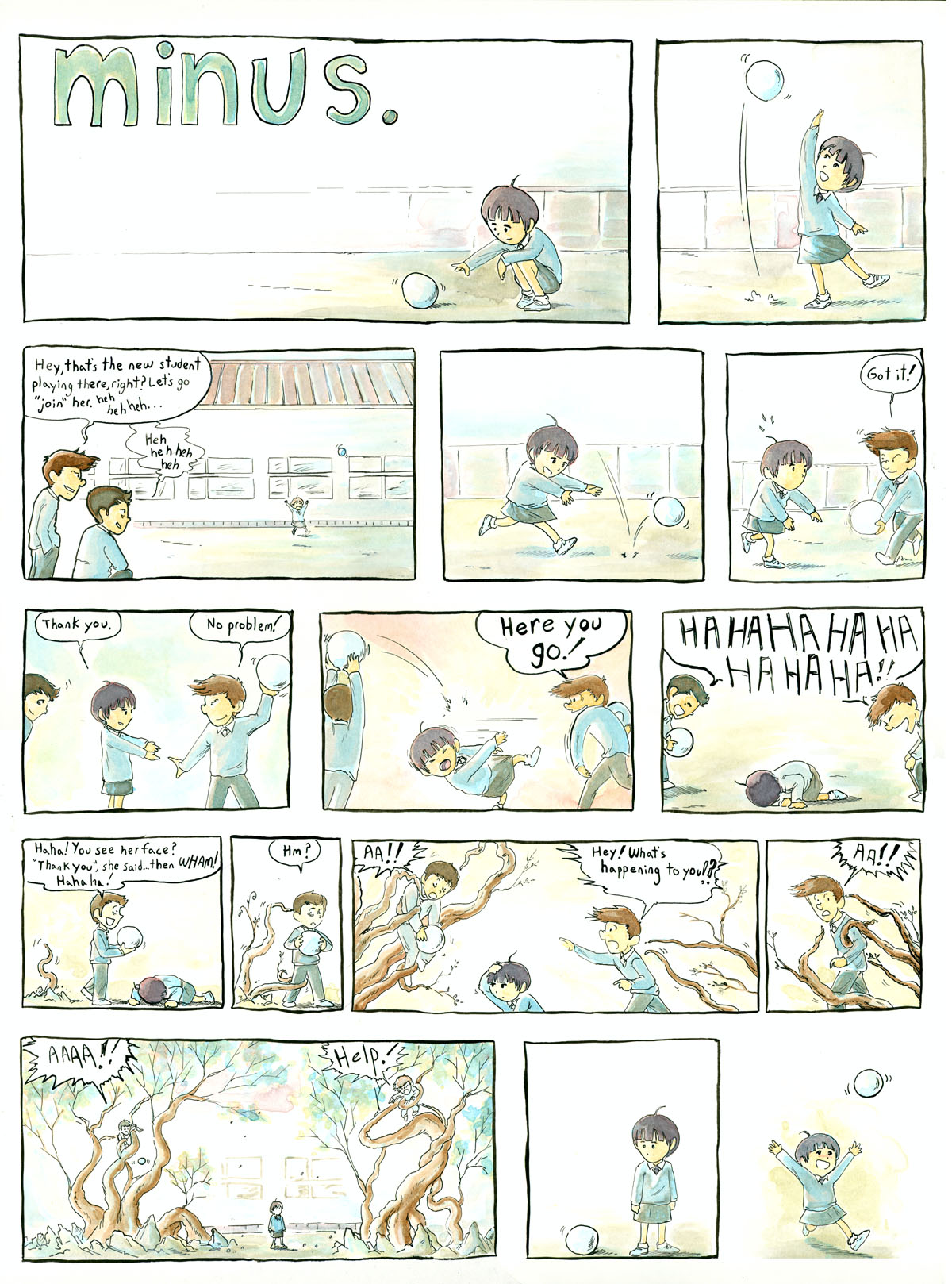 People sometimes ask me, I know a programming language, what do I do next? The answer I give these days is, what in your life annoys or irritates you the most? Whether it’s renaming many files, or scraping information from a website, or repetitively filling out a form every day, there’s probably some way to solve it with your programming language of choice.

My big personal project, that summer after my first year, was qboard, a digital whiteboard app with vim-style keybindings. I made it because I got frustrated with all the existing solutions. None of them filled the niche I was looking for, which was a whiteboard app where you could customize the keyboard shortcuts, and that frustration led me to make qboard.

When I thought about what I’ve made up to that point, one big difference between what I enjoyed and what I didn’t was whether I made something out of annoyance. qboard was a perfect example of this. My motivation on the project was pure: I need to make this good for myself, because otherwise I’ll have to deal with something I didn’t like.

It’s a similar motivation to when I made just1 a few months earlier. That was a bit more directed toward people who weren’t me, because I wanted to play with friends. Making something useful for others is cool, but I didn’t find that, alone, satisfying. For example, the most popular page on my site is titlegen, which I liked working on even less. 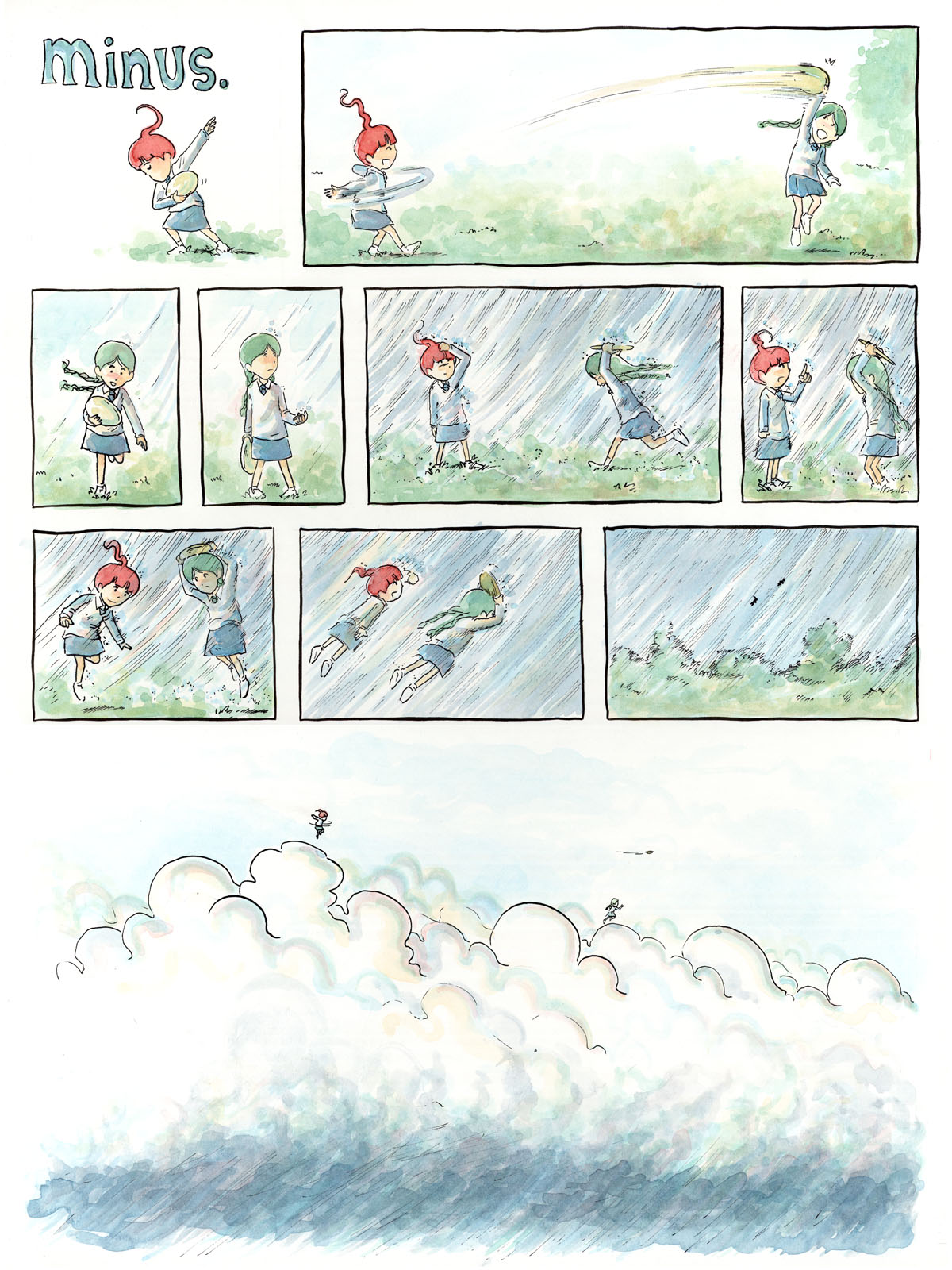 Despite that, my heart always stayed with making games. There was something about making them that felt so satisfying, that I didn’t find in competitive programming. It’s a feeling I felt even stronger when I worked on You Will Explode If You Stop Talking, or YWEIYST, during winter break my sophomore year. The difference with web development is the instant, visual feedback for what you’re doing.

I loved adding small features to YWEIYST and seeing what it looked like. I would add shapes and colors and shadows, and I get to see, in real-time, what the effects are. The cycle of doing something and seeing the result was short: there was no build step that took a few minutes to run, no script that I had to restart, nothing. Just continuous tinkering and watching.

(There are five images here.)

I’m reminded of an essay, Hackers and Painters. In it, Graham compares the hacker to a painter, as people who are both invested in creation. In that abstract, philosophical sense, web development, and programming in general, is like painting. But in an even narrower sense, front-end development is like painting. Often, you start with a wireframe, which looks a lot like a pencil sketch. Then you fill the large strokes in, maybe producing a black-and-white version, before adding color, shadows, and other details. I’m pretty bad at making art with traditional materials, but I’m so, so happy that I can experience something similar through front-end work. 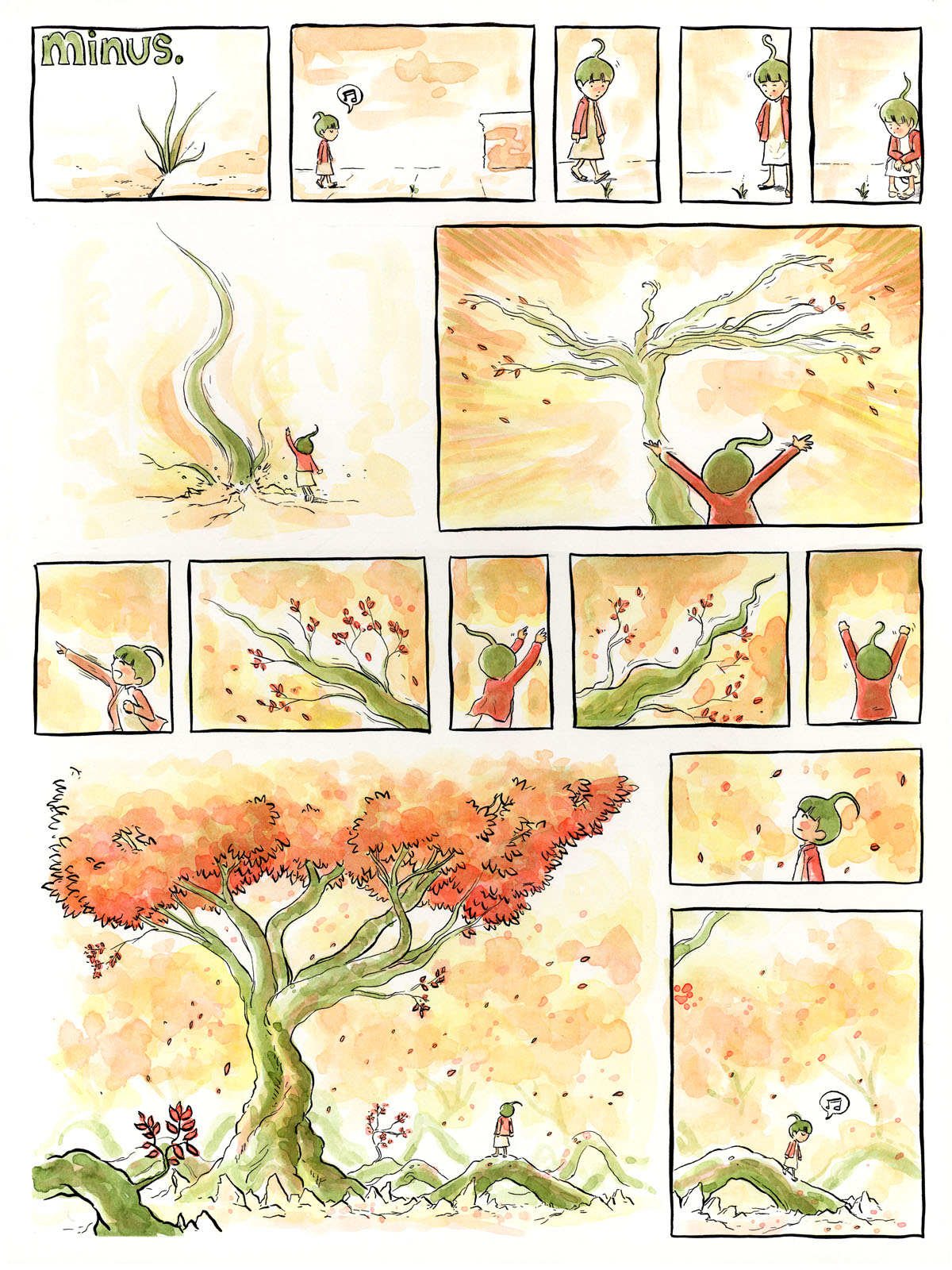 As much as I want to cut off the other things I’m interested in and only focus on one of them, I can’t. It’s too painful. Not only that, it feels like I’m betraying myself. It feels like I’d be selling out, whether I decided to only keep math, or only keep CS, or only keep writing. [… But] I don’t have to sacrifice any of these parts of myself.

I had this fear that I’d never find the one thing that fits everything I like. My interests felt like a 1000-piece jigsaw puzzle, except it’s actually ten 100-piece jigsaw puzzles all mixed together. I like too many things to expect a perfect fit, but I hoped that something would fit the big things, or at least many things. And I realized, while working on cfish during sophomore summer, that front-end work hits a lot of the checkboxes:

Is front-end development the perfect intersection of everything I like? No. Maybe an author of math textbooks might’ve been better. If a better-fitting job presents itself, I might take it.

It’s more about the comfort of knowing there’s at least one thing out there that I’d be fine with doing for a huge chunk of my life—that the number of careers I could go into isn’t zero, it’s at least one. 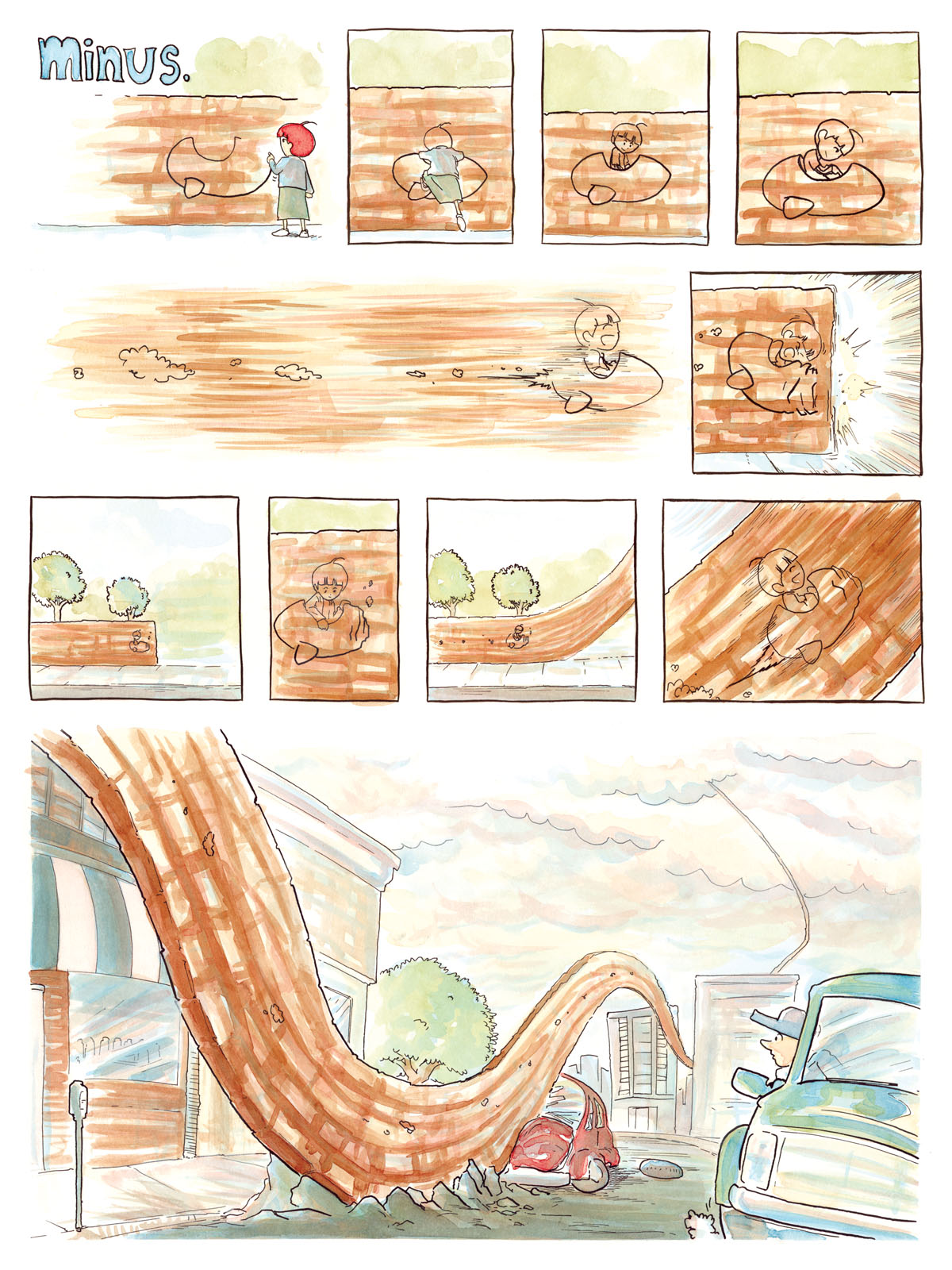 The point about each of these is what I learned. None of the things I learned were directly about front-end development. With Firehose, for example, I learned more about talking to other people than I did JavaScript. Or with Neovim, I learned Lua, and I’m gonna bet I’ll never have to use Lua anywhere near the front-end.

Yet I learned these things anyway, and I had fun doing it, because it turns out that learning is fun. Not in the aesthetic, Learning Is Fun sense. It’s more in the sense of, I feel so powerful learning how to do more things. It feels like power to SSH somewhere and not feel completely lost. It feels like power when it took weeks to understand the first programming language, but hours to understand the tenth. 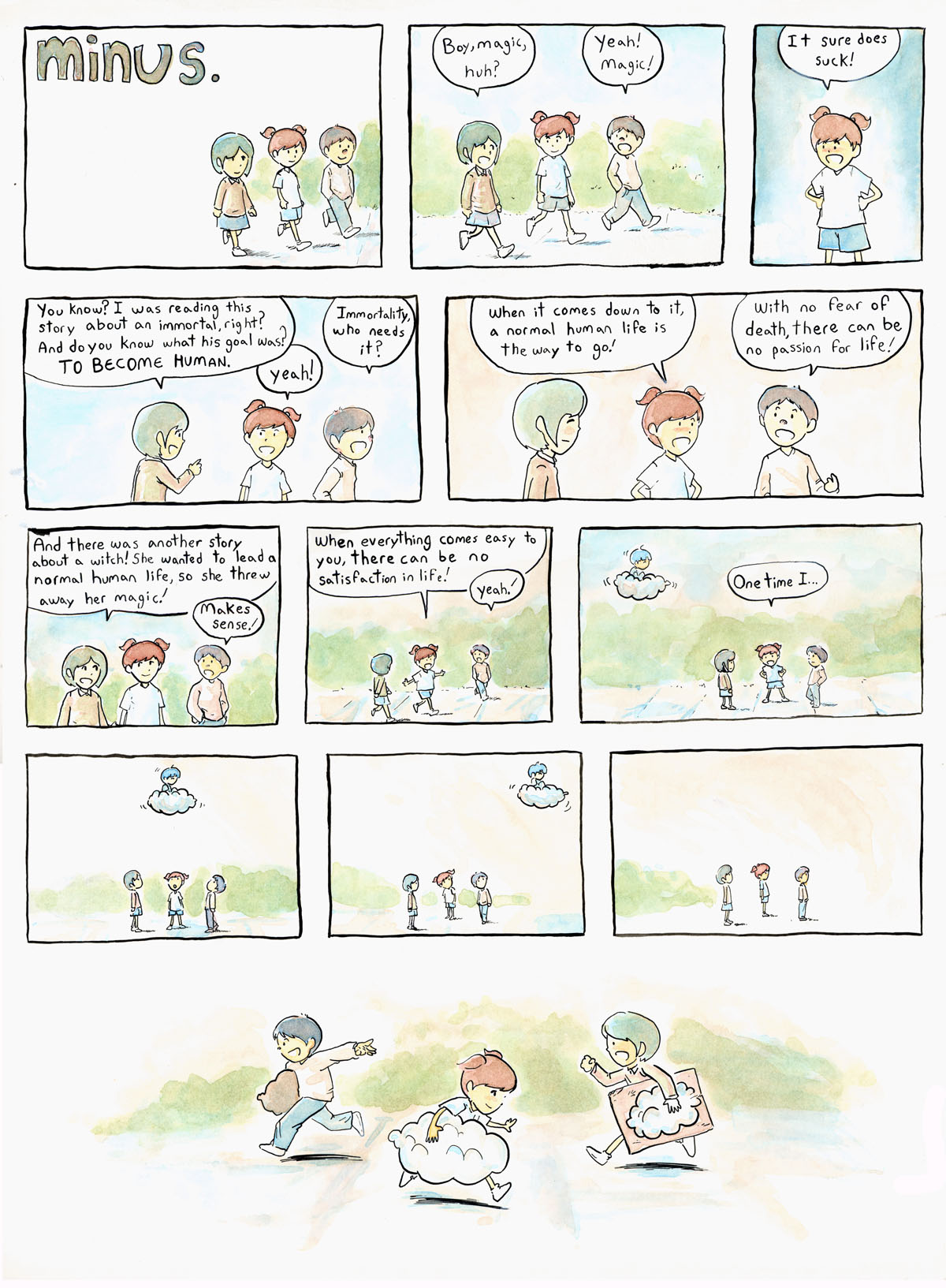 I spent a good part of winter break rewriting the the MIT Mystery Hunt / Puzzle Club website. One driving force was the motivation of wanting to have better code, because it annoyed me to work on the old one. But another was receiving all this praise from others in the puzzle community about my work.

And… well, it’s weird. It feels like it’s at odds with what I shared earlier, where I described how I found more joy working on projects when I was internally motivated. That’s still true now. But hearing people say, “the new site looks good”, and say “thanks so much for adding so-and-so”, that feels good! That’s motivation too, and that’s external motivation. My experience, then, looks more like this: 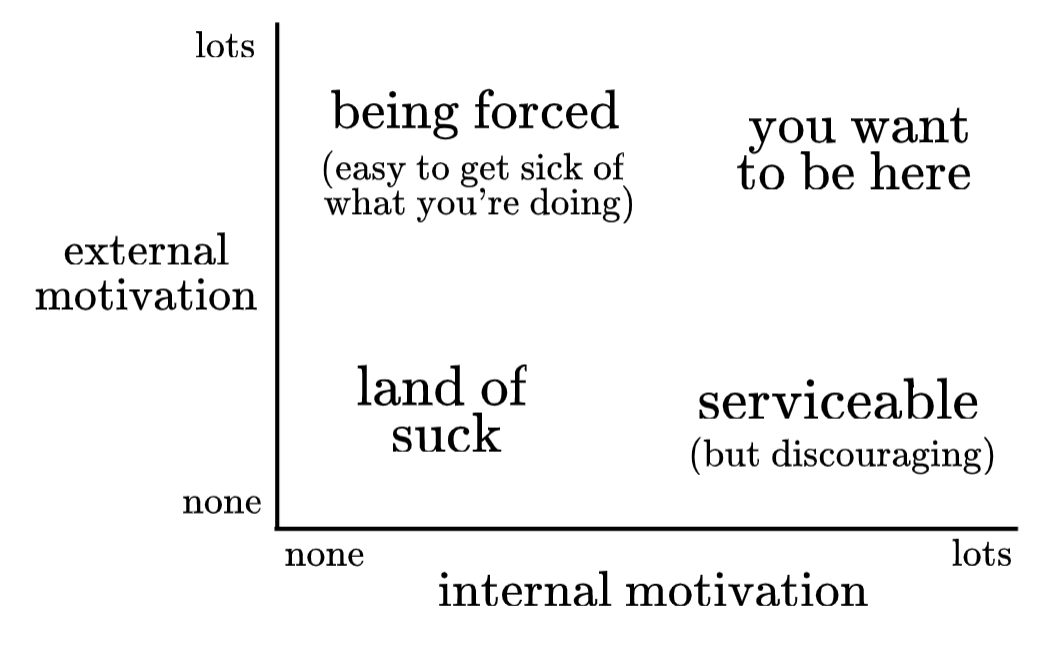 Creating work for the sole purpose of being liked by others feels counterproductive. I want to think of it less as a goal, and more as a happy side effect. If I make things I like, then others might like it too. But I have to like it. Otherwise, I end up in the same situation I did with my UROP: something that was interesting in theory, but not in practice.

Recently, I’ve been sending small, casual commits to open-source projects. I don’t think of it as “contributing to the open-source community”. It’s more like, two Slay the Spire mods I like don’t work together, let me change that. Seeing a pull request get merged, seeing other people file issues? Both small things that make me feel happy.

Will I continue to like web development in the future? It’s not clear. Heck, I haven’t even done industry work yet, let alone an internship. I hear those kinds of experiences tend to change people’s minds.

As much as I want to say yes, I will like front-end in the future, people change. I don’t want to lock myself into an identity, nor do I feel the need to live up to the person I am right now.

For now, I like what I’m doing, so I’ll keep doing it.