The first in a trilogy of Berlin photo entries, featuring Zinedine Zidane.

DID YOU KNOW? Charles Darwin’s theory of evolution was inspired partially on Malthusian economics. However, it was probably also inspired by Alfred Wallace, who sent a letter to Darwin describing a similar idea one year before The Origin of Species was published.

Berlin is truly an amazing city. It isn’t every city that sees 3.25 x 10^6 % hyperinflation, gets nine-tenths destroyed in World War II, has the lasting symbol of the Cold War built right through its center and accompanied by a 150-meter “death strip” in which you can be shot on sight, houses countless tanks for East-West standoffs, reunites almost by accident in 1992, and then fifteen years later is the capital of Germany and its most popular tourist destination. In the 36 hours we spent there, I think we got to see about one percent of it. So, if I were to do a full photo entry on all of Berlin, it would have 2100 pictures in it.

Try accessing that on dialup.

So we got to Berlin at… well, if it wasn’t 5 AM, it was sure close to it. Of course, since Germany lies north of Boston, it was still wicked bright outside. After spending most of the night on the floor of a 6-person night train compartment (trust me, our packing of this compartment was a model of civil engineering), I was moderately refreshed. We decided to take a walk around, as we had another three hours to wait before more members of our party arrived. We picked the side of the train station that looked like it was more fun and walked a short while before finding… 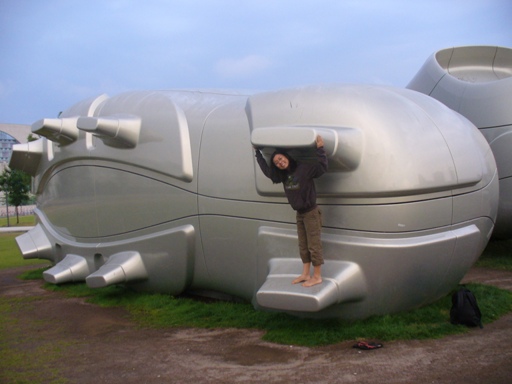 …two giant shoes. Ling ’07 attempted to climb on them, but found that last night’s torrential rain storm had rendered them too dangerous for her bare feet or comfortable sandals. Too bad, it would have made a great facebook picture. 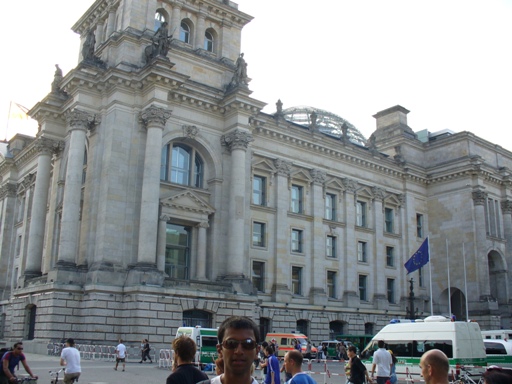 Moments later, we found the Reichstag, the center of German government. Moments after that, it started torrentially downpouring again. 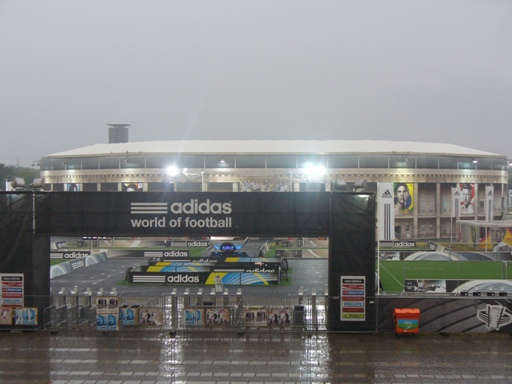 We took shelter under the Reichstag and as a result got a quick glimpse of the FIFA World of Football (probably trademarked). I heard that they built a special second stadium in addition to the Olympic Stadium, with just big screens in it so even more people could watch, but I don’t know if that’s really true.

Later that day, I bought some mustard, and we took an English-language walking tour of Berlin. It was a little bit touristy, yeah, but it was great to get the lay of the land in such a huge and historic city. It’s outside the Haagen Dazs in Hackescher Markt. But don’t try to sit in the seats at Haagen Dazs, or this one lady who works will start beating you. Did you know that Haagen Dazs is a made-up word? 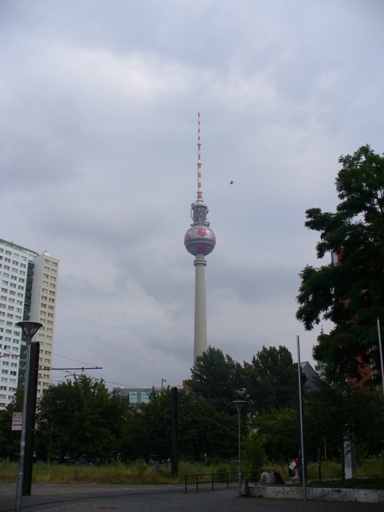 We first made note of the television tower, which has been turned into an advertisement for a World-Cup-sponsoring phone company who has terrible international rates and doesn’t get very good service in Boston. I don’t want to advertise, but if you’re going to come to MIT, I think that Verizon is the way to go. 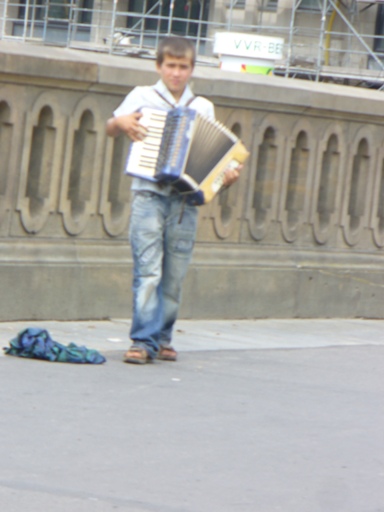 But I wasn’t really looking at this tower; I was taking pictures of this little boy playing the accordion. He wasn’t very good at it, but the music was so pure in its discordance that I didn’t really mind. I would like to record his playing and sample it on my first rock album. Then I would invite him to play for real at my first concert in Köln. 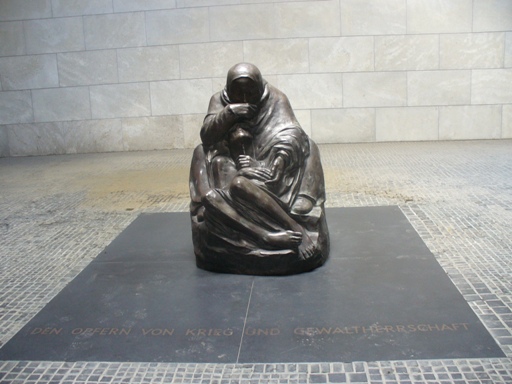 We saw the Neue Wache, a beautiful pieta-imitating statue sculpted by a woman whose grandson died in the world war. The memorial here was very small and quiet, really amazing considering the busy street, Unter Den Linden, next to it. 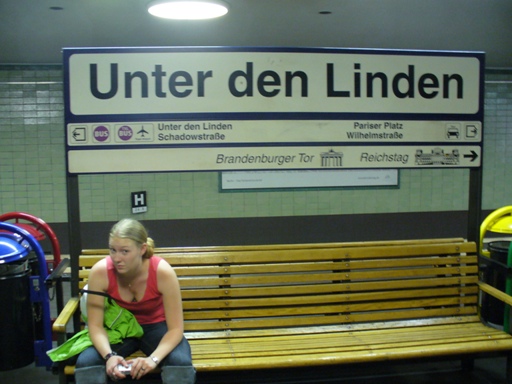 Then we went unter Unter Den Linden, to a train station that was completely blocked off by bricks during the Cold War. Why? The trains that went under it started in West Berlin, went into East Berlin, and then finished up in West Berlin. So, rather than redesign the train station to prevent people from crossing the wall, they just blocked off all the East Berlin stations, including this one. Creepy. Luckily, Kendall ’07 and I had no trouble getting in. 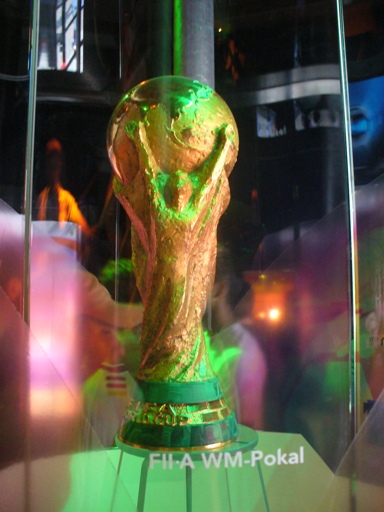 I kind of regretted going to Berlin during the World Cup finals because it was so darn busy, but when else are you going to get the chance to see the actual, factual World Cup itself? Or even better… 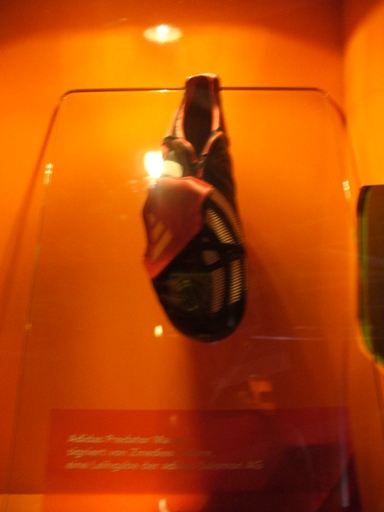 ZINEDINE ZIDANE’S AUTOGRAPHED SHOE! This was pre-headbutt, back when I was still obsessed with him… but I think the headbutt itself makes him kind of cool. He was like, “Oh, I’m not even going to be like Rooney and just ‘accidentally’ step on your crotch.” And he made the guy fall down, too.

Okay, I have to split this up into two entries. Twenty pictures is a little two much even for one of my entries. Plus, where can you really go after ZINEDINE ZIDANE’S AUTOGRAPHED SHOE?