media we’ve been into recently by Danny and Allan G. '20

In our last post, we mentioned that we were next going to blog about our urops. We recently found out, from one of our supervisors, that we actually cannot blog about our project until the end of the semester because it is *top secret* stuff for now. So, look out for that post around mid-December.

Yesterday, we thought to ourselves, “so what should we blog about now?” Nothing particularly interesting has been happening. But we have been consuming some content lately that has brought us joy, so we decided to make a list of all the stuff. We figured that some of ya’ll might find this useful if you’re looking for some distractions (specifically if you’re a high school senior trying to distract yourself or take a break from college apps). So, here goes:

Sara is one of our favorite artists… as is probably evident by our Waitress post. And she recently released a new song!!! And we really like it!! It reminded us a lot of the jazzy sound of this absolutely brilliant song she wrote and who Leslie Odon Jr. recorded.

Speaking of Leslie Odon Jr. and Sara Barellies lol. Sara covered a reprise of Dear Theodosia, a song that Leslie’s character in Hamilton sings. This reprise actually isn’t in the musical, so we are especially happy that it exists  on the interwebs now, and especially especially happy because Sara covered it! And needless to say, the song itself is amazing as everything else that comes from Lin Manuel Miranda’s brain is.

Our musical-loving friend Rukia, who we mentioned in our Waitress post, invited us to watch the Wicked 15th anniversary concert with her! So we did! And it was so good and fun! Our favorite performances were The Wizard and I performed by a very green Ariana Grande and What Is This Feeling performed by Pentatonix!

Dave Malloy is the god of musicals… like hands down. We have been obsessed with two of his musicals, Ghost Quartet and The Great Comet, which we briefly talked about  here. Recently we discovered another of the musicals he’s composed, Prelude! Like his other works, it is wIeRd, like random-capitalization-worthy wierd. But for some reason, we LOVE it! Our fave songs are Your Day, Lilacs, and Natalya.

Literally what it sounds like. The Youtube recommended section is all knowing and powerful, and it gave us one of these videos we never knew existed one day. We’ve been hooked ever since. We don’t really watch these videos for the ASMR aspect, we just love them because the desserts they make are impeccabe and super satisfying to watch.

This animated short film is SO beautiful, from the visuals to the story!!! Just, like, yes! But also, content warning, a part of it is really sad.

Again, Youtube recommended is magical and gave us this awesome channel! She does a lot of cooking videos, reviews of kitchen gadgets, and taste tests. We love her curiosity, positivity, and style of food reviews!

We have recently been obsessed with Carla from Bon Appetit Test Kitchen. Her suburban momness and sarcastic humor just really speaks to us. In high school, we were obsessed with Ina Garten from Food Network. And in this iconic episode, THE Ina Garten cooked with THE Carla. World’s didn’t just collide. They also exploded.

Next Haunt is a really cool thing that happens every year at Next House! Students, FROM SCRATCH, build an entire 2 story escape-the-room, withIN Next House! This was us, seeing it being built: Ö Ö. This year, we did it for the first time, and it was so fun!! We didn’t manage to escape, but boy oh boy did we scream haha. It was very sp00py! 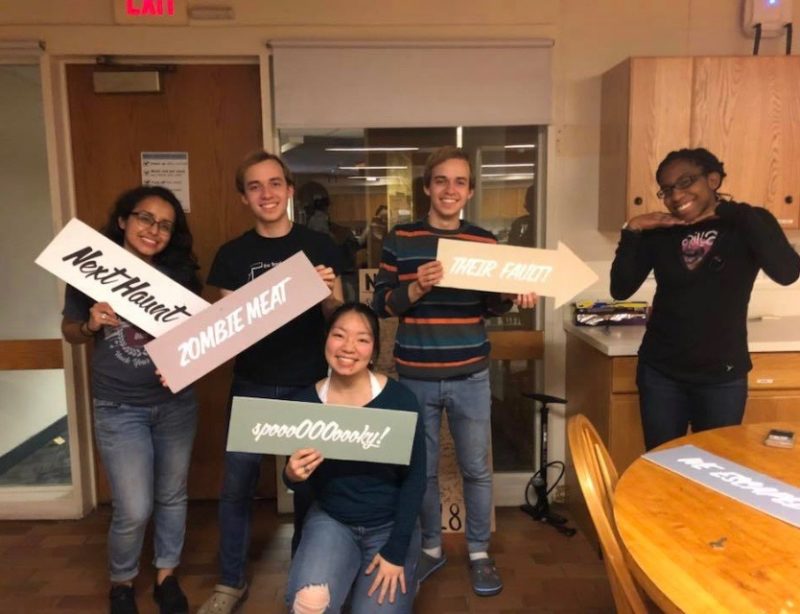 We recently discovered this poem, which is actually written by Lewis Caroll, the person who wrote the books that Disney’s Alice in the Wonderland was based off of. It’s super unique and we really like it! Here is our favorite stanza:

He took his vorpal sword in hand;

So rested he by the Tumtum tree

And stood awhile in thought.

I’d Rather Be Me Music Video

Mean Girls the musical is SO GOOD and BARRET IS INCREDIBLE!

“In My Dreams” really just tugs at our heartstrings. We love how hopeful it’s tone is! It’s a very I-can-do-anything song, and sometimes, you just need that.

Danny: Ummm noo this is kinda wierd and cringy

^ This is an actual snippet from our google doc as we were writing this post. It very accurately describes our writing process if anyone is curios.

As you can see, Allan won our heated debate, since you are reading this now. Anyways, we saw this on facebook and even though Danny thinks it’s cringy, he secretly loves it, because IT IS PERFECTION!

Elissa showed us this song when we were hanging out and we LOVE IT, especially the lyric break down video!

A friend showed us this video, and like, it really speaks for itself. We are obsessed.

The same friend showed us this meme! We had heard people using the phrase “I am confusion” in conversation and we both use it occasionally too… it’s a very applicable phrase here honestly lol. We’re so glad that we now know its origin story!

That’s about all the media we have for now! Till next time! :A :D