working through feelings caused by news

four months ago i made a post about being back in east campus saying:

thinking about this room makes me kinda sad. east campus is scheduled to get renovated next summer, and if that happens as planned, i won’t get to spend my senior year at ec. but more to the point, all the history of this room, all the years and years of stories attached to each piece, may not get passed on anymore. it makes me think about how fragile oral history is. someone lived in this room five decades ago, and i don’t know anything about them.

i alluded to the fact that east campus was scheduled to get renovated next summer. well, we recently received news that the renovation would be postponed. and i have… mixed feelings about it. to fully explain all of these feelings, i’ll need to start from the beginning.

when i was entering mit as a frosh, we knew, we all knew, that burton-conner was set to be renovated. it was taken offline in summer 2020, with construction scheduled to finish in summer 2022, two years later.

as ankita talked about in the post i linked, renovation is a big deal, because mit dorms aren’t just buildings. as an example, danny wrote a post that helps explain a lot of why i love east campus. i don’t want to belabor this point, because that’s not the point of this post. really, just read any post under residential life. the choice of where to live, and who to live with, is one of the most impactful choices an mit undergraduate makes. it really is that big of a deal!

so people care, a lot, about preserving this community, and keeping it going. burton-conner had its own transition team, that had lots of meetings to figure out the logistics of how renovations would work. and, well. two years doesn’t sound like much, but consider that turnover for a dorm is only four years long. this means that:

this means that there’s only one class year that will have seen the dorm both pre-renovation and post-renovation. so two years is a lot relative to how undergraduate culture propagates. for burton-conner, that class year was the 2023s. and there are lots of challenges with this, not least the fact that the 2023s themselves only lived in burton-conner one year before it got renovated.

in reality, the 23s who lived in burton-conner only lived there for a semester and a half, because of the pandemic forcing everyone out of campus. of course, communities can exist over the internet. but without a physical place to anchor them, considering how so much of that community was shaped in-person over decades, well. it’s, it’s tough, tougher because of the pandemic.

there were rumors, even back in 2019, that east campus would be next. that housing was renovating all the non-tier-1 dorms, and that renovating random hall was out of the cards because of logistical challenges, so it’d be east campus up next. but even if that was true, no one had any clue when these renovations would happen—immediately after burton-conner’s, a year after, two years, more?

burton-conner, and the rest of the mit community, was informed about bc’s planned renovation in february 2019, near the beginning of spring 2019. they had a semester of headway to get ready for the 2023s who were entering that fall, the only class year that would be in burton-conner both pre- and post-renovation.

east campus, on the other hand, was informed in may 2021, the week before finals. unlike the announcement of burton-conner’s renovation, this was a much quieter announcement. there was no email from housing or student life to the mit community. instead, an email from our president one tuesday night opened simply with:

Yesterday exec got the final confirmation that EC is the next dorm on the list for renovations.

the rest of the email gave the details. renovations were scheduled to happen in summer 2022, immediately after bc renovations would be finished, and they would last for two years.

east campus dealt with the sudden news the way east campus always does. an email to the ec mailing list soon followed the announcement email, with the subject “courtyard scream? eom”. moments after the email, i opened my courtyard-facing window and listened. the courtyard was filled with the sound of screaming, and i joined along, screaming with them.

it was a bit overwhelming to hear the news at the time, and i appreciated the opportunity to release some emotions. i texted the news to friends, and the news got shared in several group chats and discords i was in. people started talking about it, because of course! why wouldn’t people talk about it? we knew it would happen, but we didn’t think it would be us.

in retrospect, maybe we should’ve seen it coming.

the next night, ec had housecomm, which is our biweekly meeting where we talk about east campus government and stuff like that. it was over zoom, because that was spring 2021, where everything was still virtual despite most students living on-campus. we spent the meeting clarifying some details. on the renovations itself:

one of the things i liked about the meeting was how it was focused on having a nice, productive discussion, emphasizing things that we can do instead of things that we can’t. for example, there was some discussion about being in touch with burton-conner and learning from them. there was some nice back-and-forth about what it means to preserve and document our current culture without enforcing it.

the other thing that came up during the meeting was establishing a renovation committee, similar to the transition team ankita mentioned in their blog post. we spent a bit talking about this rencomm and what their mandate would be. at the turn of the summer, nominations for rencomm opened as discussion continued about the upcoming renovations and what we can do about it.

one of the most helpful things to hear during that meeting, even though it wasn’t oriented towards that “what can we do” kind of discussion, was something our head of house sandy said. she said that she has seen east campus culture survive, and that she was confident that it’ll stick around even after the renovations. and i know it wasn’t anything concrete, but hearing that reassurance from someone who’s seen that really helps. (i mean, generally the east campus house team, which consists of the faculty and staff who reside in east campus to support the students living there, is just really awesome.)

i left housecomm that night feeling a bit sad about renovations, and anxious about what would happen to the community i’ve grown to love. while i did feel some hope that we could keep the ec spirit alive through renovations, i felt apprehensive about the amount of work that needed to be done to do so. as one of floorpi’s hall chairs, and with everything else i was doing over the next year, i felt like i already have my hands full with holding up ec now. it worries me to think about how much work it’d take to hold up ec in the future.

the fall began, and with it, residence exploration and hall rush. we were communicating with 25s, who were coming in with the knowledge that they’d stay in ec for a year before renovations happened, and could come back to ec afterward to reseed culture if they wanted to.

over the next few months, rencomm, along with other initiatives, have put their focus on how to keep east campus afloat during renovations. rencomm has three subcommittees: community support, documentation and history, and institutional relations. rencomm members have reached out to ec residents to ask for thoughts, for what people want out of the renovation process, stuff like that. for example, the history subcommittee reached out to the hall chairs to start documenting cultural practices, and i’ve worked on writing up some documentation about floorpi myself.

there were also things like sts.s20, a class taught by one of our associate heads of house, named “tales of two parallels: documenting east campus history”. it’s a whole class about ec history and culture, and students worked on historical research projects about many aspects of ec, like murals or hacks or pets and so on, and there’s the sense of doing this in the context of the upcoming renovations. i know lots of people in the class, and later tonight they’re going to give a presentation of their findings, and i’m pretty hyped to see what they’ve produced. (i would’ve loved taking the class myself, if i didn’t have something else on tuesday nights.)

then, about a week ago, some news dropped. the renovations were delayed to summer 2023, primarily due to supply chain and logistic issues.

there was other information in the email, but before i could even finish reading it, another email came up, proposing another courtyard scream. and scream we did. for some of us, perhaps, it was a scream of relief, but for me, it was a scream because i didn’t know what to make of the news. it should be a good thing… right? it should be good news, right?

well, the feelings i felt in the order i felt them:

now that i have a bit more distance to when the news was released, a lot of the initial shock has settled down. right now my predominant feeling is roughly well, that was anticlimactic, as sort of a summary of all the other feelings i’m feeling.

i think the news has also forced me to confront some of the feelings i’ve had toward floorpi for a while now, that i was just forcing myself to not think about. i talked about these a little on this post. i think it’s beginning to feel like i’m only living in floorpi because i feel obligated to, in some sense.

but despite that… i want to want to live in ec. 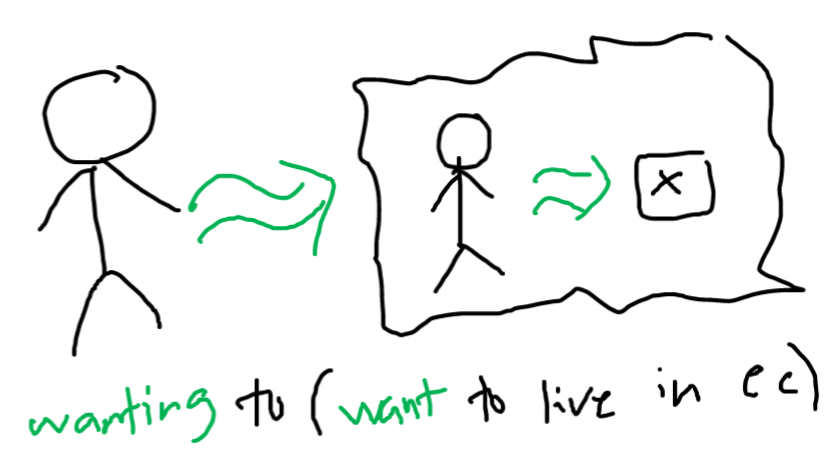 in fact, i feel like maybe this has been the motivation for a lot of things i’ve been doing; that maybe it’s not out of actual, genuine care, but because i feel obligated to. do i actually enjoy it? it’s unclear. i want to do it, but do i want to do it because i actually like doing it, or because not doing it makes me feel bad about myself?

i guess that’s the real reason why i feel that the news about the renovations has been giving me kinda mixed feelings. it’s going to force me to confront these thoughts i’ve been shrugging off, because i’ll have to reckon with them even more, as opposed to being able to start ignoring them as soon as renovations start. and i don’t know if i’m looking forward to that.

it’s unclear how much of this is due to the actual news though—maybe part of it is just from finding better ways to deal with my anxiety rather than just pouring myself into things. maybe without having the backdrop of my depression and anxiety lingering over me, i’m beginning to understand the privilege of doing things i like doing as opposed to things i feel like i need to do.

so… even if there is one more year that i could stay in ec, do i want to spend that year here? i don’t know.