Turkeys into oil, apples into beavers... it's all good.

Sunday, October 23 in the Porter Room

Win as much as $500 for your floor, the most prize money ever!

Apples will be provided by your GRT on Friday, October 21. Entries are due Sunday the 23rd at 3:00pm in the Porter Room. Winners will be announced around 4:00pm and eating will commence.

$500 in prize money will be awarded in the following categories:

Entries are judged by the Floor Faculty Fellows, MIT Staff, MIT Housemasters, and their families.

Plan your strategy and test your recipes while you have the time. Remember, there are five unique categories, so improve your floor’s chances of winning by entering in all five!

Apple Bake has been a fall culinary tradition in Burton-Conner for the past N years. About 5 years ago, some sophomores from Conner 2 decided that they’d had enough of seeing so many other floors’ entries in the competition, so they went all-out, white-knuckle, Tom-Cruise insane with baking for an entire weekend, flooded the field, and won most of the prize money. Well, these folks graduated two years ago, so last year I decided to step up and become the floor’s new Apple Bake Chair (TM). No other floor actually has an Apple Bake Chair. While a lot of people on the other floors go out, buy some ingredients, and make a few dishes, Conner 2 organizes a mass shopping trip for over $100 of food the Friday before the competition, assuming that we’ll end up winning at least as much as our initial investment anyway

It’s truly glorious to see the floor in the hours immediately preceding apple bake–perhaps my finest moment as a human being was last fall when, as a result of the competition being on Saturday instead of Sunday, I baked for 16 straight hours and, finding myself completely out of counter space, threw myself onto the kitchen floor to begin rolling out pizza dough on a cutting board. This year, I was a bit more organized and had an extra day to bake, so although I became a little stressed out, I was still able to crank out a few dishes:

Ultimately, none of these ended up winning anything–they awarded only one prize in each category instead of two, and my work wasn’t so fantastic as to win an entire category. Still, it’s gratifying to know that my own work made up 5-10% of the total entries into the competition. Conner 2 did end up cooking just under half of the total entries, winning three of the seven categories (including Best Overall for an apple butternut squash soup) and taking home about half of the prize money once again. 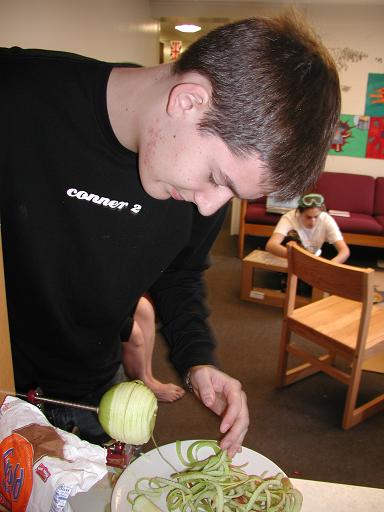 Richard ’09 demonstrates our floor’s communal apple implement of doom, which cores, peels, and spiral-cuts an apple for you. One of the awesome things about this implement is that it gives you one continuous, thin peel–and there’s an apple sculpture category. Hmm… Freshman year, somebody braided 3^3 apples into a lovely, violet-accented wreath. This year, we came up with this: 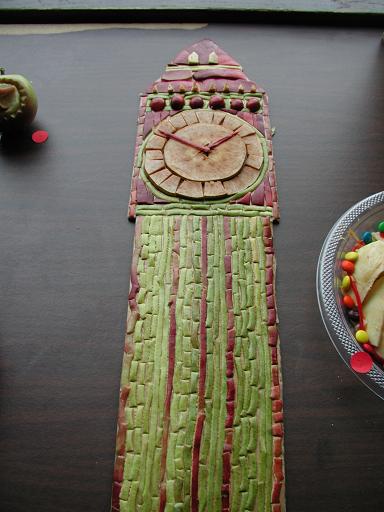 Not to be confused. This actually did not win apple sculpture, hard as it is to believe, because it was up against this: 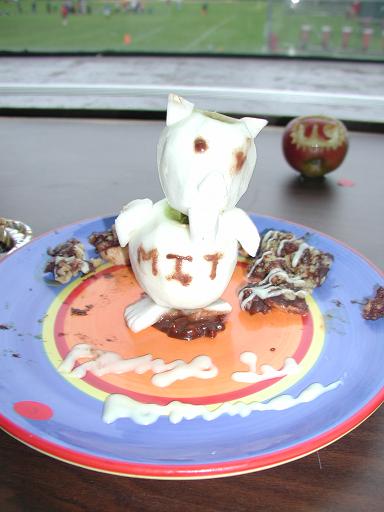 Also, check out the apple “pi” in the background. Big Ben is nice, but I guess you can’t really compete against school pride. Well, maybe you can. Ruth ’07 and Richard ’09 also spent a few hours or so assembling this: 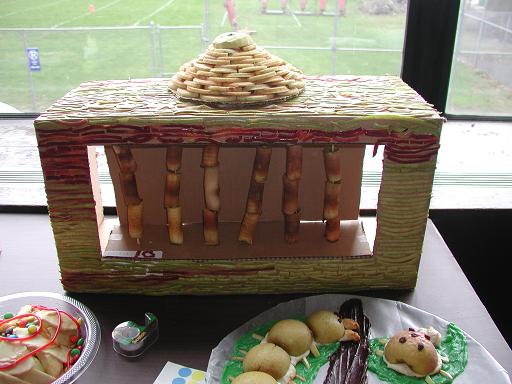 But, still, Tim emerged victorious in the sculpture category. Next year, watch out for my apple Susan Hockfield. 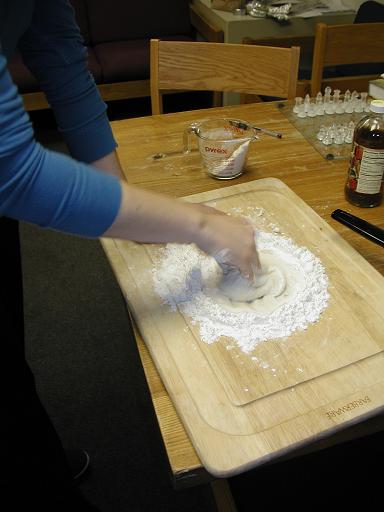 Diana ’08 went to the trouble of bringing out a pasta maker and making her own ravioli dough, a process which took about three consecutive nights of work… even longer than the 24 hours it took to cook my apple butter. It goes without saying that they were amazing. 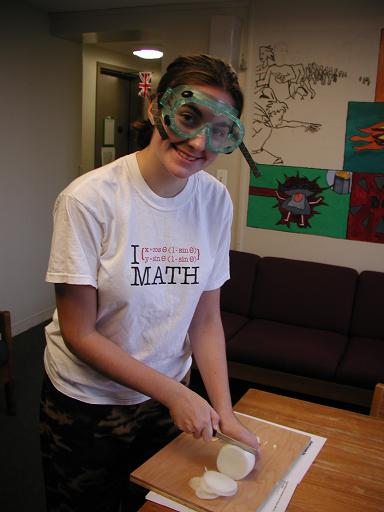 I actually invented the idea of using lab goggles to chop onions (where’s my Nobel prize? or at least Ig Nobel prize?), but Ruth ’07 models it so much better than I. 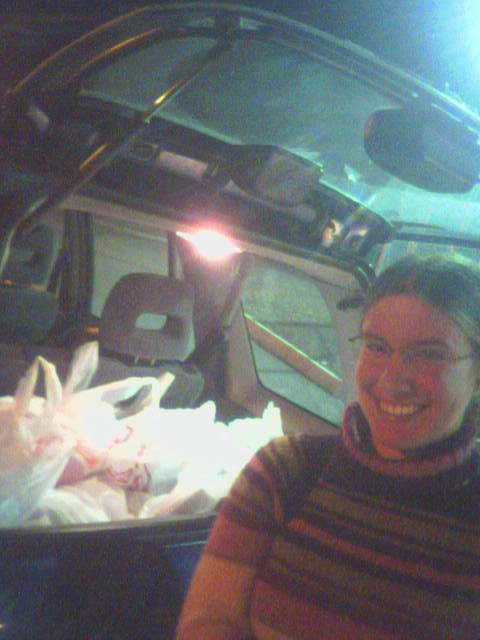 We bought enough groceries to reach Adelaide ’09’s waist!. Actually, to be fair, these were also for Freshman Dinner (alluded to by Laura) and a camping trip sponsored by MITOC, but still, the fact that we spent $300 groceries in Inman Square is still quite an accomplishment. 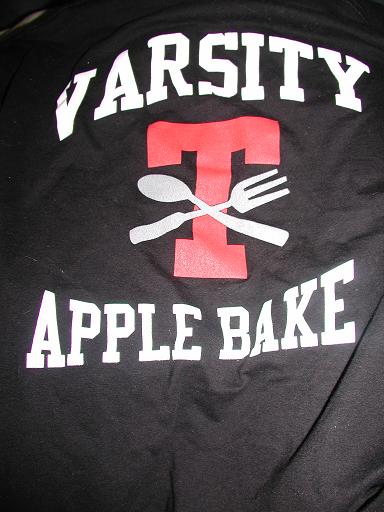 Our floor t-shirts. If you’d like one, just send me an e-mail–we’ve got a ton left over and they’re only 9 dollars plus shipping! Just think, a t-shirt designed, purchased, and lovingly packed by real MIT students. You’ll be the coolest kid around.

EDIT: Turns out they did hand out second place prizes. Notice that 90% of the awards went to Conner side, which contains but 40% of the dorm’s residents.

Conner 2, which contains about 10% of the dorm’s residents, won 40.5% of the prize money after cooking 46% of all the dishes entered. Okay, so maybe we weren’t 100% efficient… but remember, the entropy of the universe increases in all natural processes.

Most Creative: Apple sculpture cake, B2