Well now, this is a good way to start a blog entry. 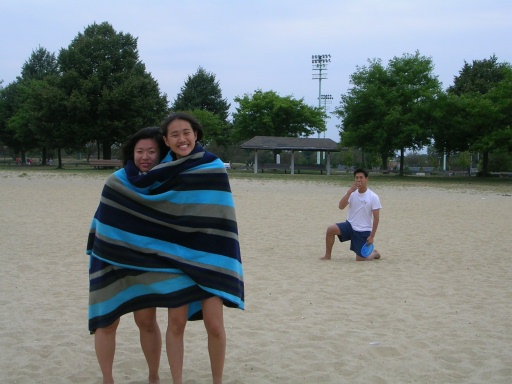 Megan ’08, nine people I don’t really know and I went down to Carson Beach today and then this happened. Well, it was a little cold, for the first time in a few weeks. Who can blame them?

Sorry. That’s an apology for a lot of things. Please don’t go stalking them now.

Unfortunately, since I travel around every day with a personal rain cloud above my head (see my life as a cloud) and bring horrible, torrential rain to otherwise lovely places, the weather today at the beach was cold and windy, mostly cloudy, with scattered showers. Luckily, Yunjie ’08 had seen March of the Penguins, so she knew that the best way to get warm in an antarctic environment is to huddle together in concentric circles, backs facing outward, with the youngest in the middle. That worked for a while. Thanks, Yunjie ’08!

We were down in the water for about 3 minutes immediately after getting to the beach before we realized that it was unbearably cold. But we did see a crab! 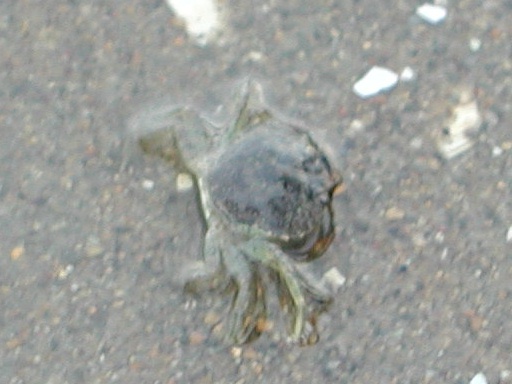 This frightened Megan ’08 to no end. Hope she’s not reading this entry or she might see this picture and be reminded of the trauma. Sorry, Megan ’08!

After that, we sat forlornly upon the rocky shore for a very long while. 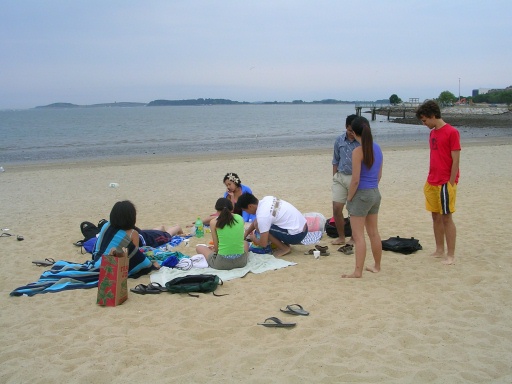 Then we perked up and played games that you traditionally play at swank MIT dinner parties, like Mafia, Moo, and President. I just want to say right now, Moo is like the greatest game I’ve ever played, and I’d like to teach the world to play it. President is one of those crazy smart people card games like Speed and Ambition that I never think I’ll be very good at, but it’s actually entertaining and strategic, even if you end up losing every single round. I would know. Of course, Mafia is never too shabby.

MIT Mafia Test: If you were a tree, what kind of tree would you be? An apple tree, an orange tree, or a mafia tree?

The mafia always burst into uncomfortable laughter when confronted with this question. Totally foolproof. Trust me. I’m the inspector.

So, Ruth ’07 and I have been really fascinated with the Ironsides Rugby Football Club, Boston’s only gay rugby team. They actually played a game against MIT Rugby late last semester, but we missed it because Woon Teck ’05 lied and told us it was cancelled on account of rain. Then we had actually planned to their home stadium and just randomly spectate at one of their games, but that game was actually cancelled for unknown reasons. Well, guess who apparently plays football on Sundays right across from Carson Beach?

Well, it was a holy grail for me, at least. Nobody else had any idea what I was talking about. Actually, I didn’t tell them, out of embarrassment. “Oh, yeah, there’s this gay rugby club in Boston that Ruth and I are obsessed with. She’s gonna be so jealous of me, even though she went to Niagara Falls this weekend.”

Yeah, so I wouldn’t say that in public, but I’ll gladly post it here in public. Because on this blog, I have no shame… as you will continue to see.

3 responses to “Sun off a beach”