I'm about to tell you a super cool story. It happened two years ago, but it was AWESOME.

Okay, so what I am about to recount for you happened like 2 whole years ago, but it’s super awesome and while it’s hard to exactly explain why, something about it really strikes me as “very MIT,” so I think it’s worthy of a blog entry, even if I’m 2 years late in posting it.

Yesterday and today, MIT hosted hundreds of middle and high school students for a program called “Splash.” Hosted by the Educational Studies Program, Spalsh is a huge project that encourages dozens of MIT students to teach literally “whatever they want.” The organizers recruit student volunteers to create classes in everything from “Alebgra 1” to “The Atomic Science of Space Weapons” and everything in between. You can check out some of the interesting offerings in this year’s Spalsh course catalogue.

Well, a couple of years ago I actually volunteered to teach at Splash, an experience which I blogged about, unfortunately in the same entry in which I posted a really embarrassing photo of no less than 4 bloggers. (Yeah, now you’re definitely going to click on that link.) I taught two classes: Intro to HTML, which I had no problem crafting myself, and Introduction to Electricity and Magnetism, for which I sought out a little help.

But first things first: who’s Doc Edgerton? Have you ever seen that famous photograph of a bullet going through an apple? We have Doc to thank for that. He developed all kinds of strobe light technology, making it possible to photograph events which happen more quickly than the human eye can detect. 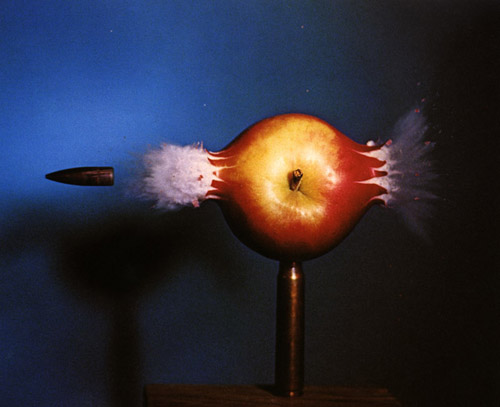 (WARNING: PDF…written by my 2.009 instructor, actually!)You can read a biography of Doc here. 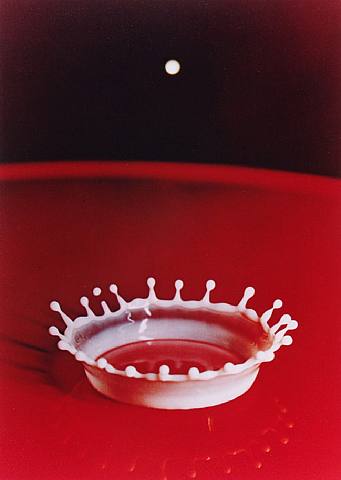 Doc was famous for his love and talent for teaching, making him incredibly popular among students. Apparently he is credited with once saying, “The trick to education is to teach people in such a way that they don’t realize they’re learning until it’s too late,” which just goes to show you how cool he was. To fully appreciate this story, please try to understand that Doc Edgerton is something like an Institute legend.

So rather fittingly, the Edgerton Center was named after him. What does the Edgerton Center do? I think a better question might be “what doesn’t the Edgerton Center do?” It’s sort of like the hidden engine behind the “manus” part of “mens et manus” (MIT’s official motto, which means “mind and hand.”) They still operate a strobe laboratory on the 4th floor of building 4, right next to a couple of classrooms they use to invite local high school students to MIT for special educational programs run by undergrads who can get paid for their efforts through UROP (Undergraduate Research Opportunities Program). Across the hall is an electronics lab where various courses and seminars are taught throughout the year. The hallway in which all of these things are located is half museum exhibit, half playful laboratory- the walls are lined with mini interactive exhibits which demonstrate different concepts of electricity and strobe lights. The Edgerton Center operates a machine shop for students in a different building on campus, co-sponsors the IDEAS competition (which encourages students to form teams and work on developing technologies which will aid the developing world), and is the financial, academic, administrative, and intellectual backbone of a whole list of “hands-on” student groups, like Formula SAE (of which I used to be a member, actually), FIRST Robotics (of which I also used to be a member…I really got around the ‘tute in my day…ahem), Solar Car team, Rocket Team, and others.

Not only that, they also offer general moral support for the student body. Like, officially. To quote their website: “Throughout the year students may also come to the Edgerton Center for help with independent projects for which they may need a workplace, test equipment, access to a shop, or simply advice and encouragement.”

It was precisely this vague and generous offer of which I decided to avail myself while preparing for my class in Electricity and Magnetism. So I just happened to be hanging out in the electronics lab, getting advice and supplies for a whole range of supercool E&M demonstrations from one of their staff members, on the night that one of Doc Edgerton’s collegues happened to drop by to say hi.

I am so not kidding.

I was just sitting at a lab bench, taking apart a cheap music speaker so I could demonstrate to my students how sound is created through alternating electric current which is translated to alternating magnetic fields and then into motion of the speaker cone, when there was a knock on the door.

The visitor was a graduate of MIT’s class of 1950-something and basically worked with Doc Edgerton as a UROP and helped develop some of the groundbreaking strobe technologies. After he graduated he went on to create his own company in underwater strobe technologies and just happened to be in Cambridge for some conference or another, so he decided to stop by and ask for a tour of the lab. He even showed off his Class of 1950-something brass rat to prove it (maybe if I had written this entry when it actually happened 2 years ago I would remember the details better…) and had a conversation with me about how the culture behind the MIT class ring has changed in the intervening years.

So I abandoned my half-disassembled speaker to get a tour of the famous strobe lab myself (I’d never been inside before) and sat around with a group of staff and students as we listened to this alum tell stories about Doc and the escapades in the lab back in the days of its infancy.

And that’s the whole story. So the story itself is maybe one sentence long. But in the context of the culture of MIT, it’s like the COOLEST STORY EVER.

I don’t quite know how to summarize it except to say….these are the things that MIT is made of.

21 responses to “The Stuff of MIT Legend”