but not the final blog unless something terrible happens to me in the next 48 hours.

Today I sprinted down Massachusetts Avenue in a noontime spritz of winter sunlight and illegal traffic maneuvers spilling habitually onto the sidewalks of Cambridge. One of the Random Hall graduate residential assistants walked by, witnessed my torpedoing burst of undiluted energy, and crossed to the other side of the street.

December 18th, thus far, has been a paroxysm of joy.

Earlier tonight, Facebook like a hyperactive mailman delivered to me a message from a high school friend, querying how much I liked MIT. I started to write a real answer but then realized that my laundry was 13 seconds away from done. “BRB LAUNDRY,” I believe, was my infinitely graceful reply (I even included a link to Random Hall’s laundry server in case BRB’d friend cared enough to keep reloading the page in order to catch the exact moment when I started the dryer.)

So, unresolved thread: How much do I like MIT?

The best answer I can think of is, more than I like my friend but less than I like the laundry server.

Honestly, some days here are like working all summer to buy a new Wii with your hard-earned cash and then taking the Wii and eating it, plus maybe one of the controllers. I have no idea what this analogy actually means, but it definitely relates in some fundamental way to the weekend before finals.

There’s other days, however, for which you would gladly consume the entire holiday bestsellers list on Amazon, or, even worse, McDonald’s. Today was a brilliant example. Let it be known that as of 11:35 AM, 12/18/08 AD, I’ve officially, definitively, unequivocally, adverbially finished my first semester at MIT.

It started, like many days, with waking up. At 7:30, I frowzily rolled out of bed, realized that this isn’t an expression that can be safely applied when you sleep on the top bunk, caught myself, pulled a camera off the dresser, and in one smooth motion snapped a picture of my reposing roommate. Never mind why. 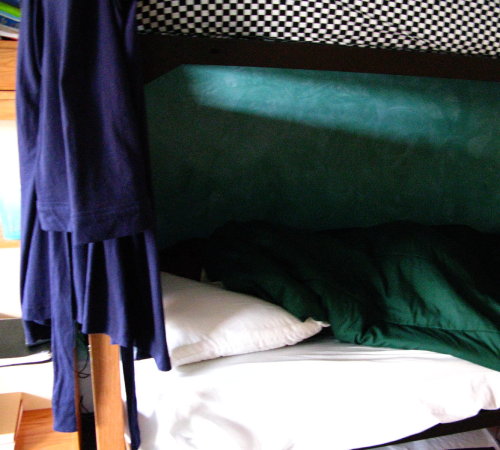 Also, let it be known that my roommate (having finished her semester yesterday) slept until 11:45 AM, which is when I crashed into the door of our room after whipping a biology final into a light, delicious cream. I had a healthy, refreshing four-hours of extra-lite sleep the night before, so at 7:30 AM I was sort of fascinated by the sun.

Tip for the Successful and Conscientious College Student: Stick your name tag somewhere on a conspicuous piece of furniture in your room, and you will never forget the most important piece of information that you will need to memorize for any test. I had to study my name for a while, since there’s no way I can re-derive it on an exam, no matter how many theorems you give me. 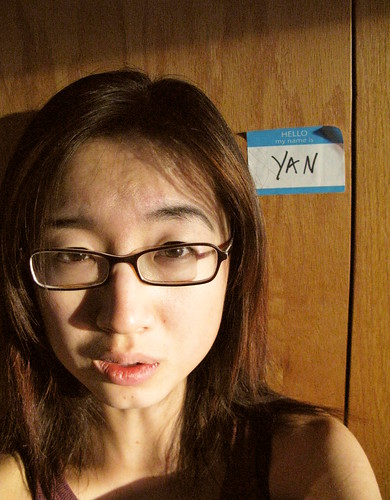 Once I had made sure that the “n” actually came after the “a,” I headed down to breakfast. Adele and Nina, Random Hall’s lovely graduate resident tutor and headmistress (respectively), were making the third-most important meal* of the day for residents who wanted to cram in a hot breakfast as well as last-minute studying before 9 AM exams began. Nina, contrary to visual evidence, is not actually raving about the high price of bacon in the photo below. 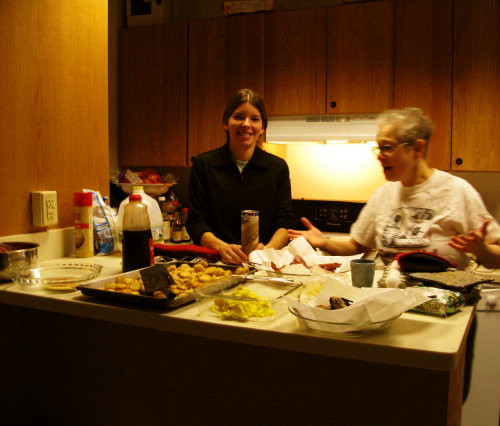 Strawberries were aplenty. They tasted like ice cubes stuffed with hemp, but- look, a picture! 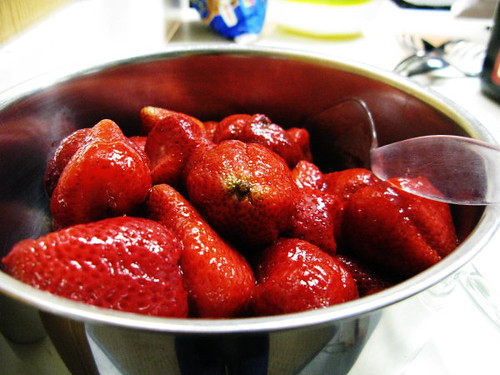 Muffins and climate change: Part of a balanced breakfast in the Northern Hemisphere. 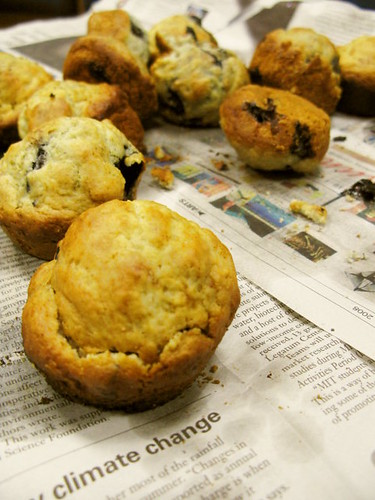 Someone exploded food onto this table. 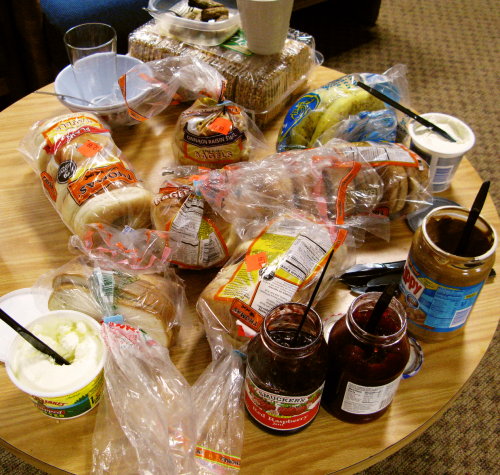 I was placidly pouring a bowl of wheat cereal when Nate ’12 appeared holding a monstrous slab of non-cereal. A Brahmsian chorale of breakfast foods was this. I bet Nate aced his final. 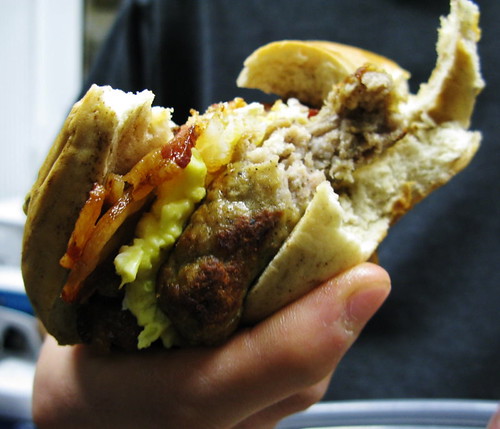 Katelyn’s bowl, on the other hand, reminded me of my true Midwestern roots. Back when I lived on the prairie, Ma would grill flapjacks and sausages every morning in our sod house while I removed embryos from the maternal chickens and then played Wii sports for a few hours. You guys can probably tell that I’m making this up, Sherlock. 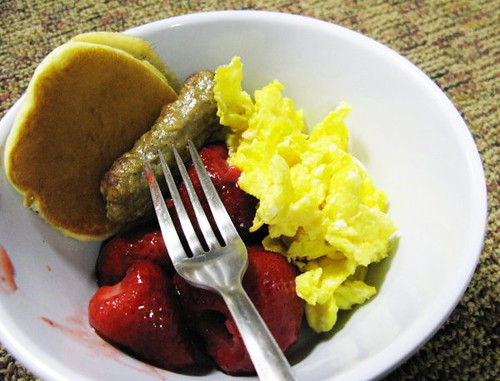 Breakfast came to an unwelcome end, much like my Midwestern childhood, and I split off to take my three-hour biology final. The urge to go to sleep after the two hour mark was overwhelming, so I ended up leaving after 2.5 hours. Merry Christmas to me.

Soon after, I headed down to Lobby 10 in the Infinite Corridor to assist the Laboratory for Chocolate Science in serving free hot chocolate to weary travelers passing by on their path to the next final. 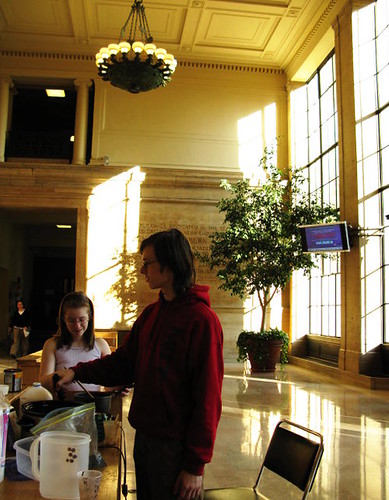 Notice the flamingo-pink container of lemonade mix amidst a tranquil, humdrum lawn of cocoa, vanilla, and cinnamon. Apparently, when life gives you lemons, the appropriate course of action is to manufacture pink lemonade powder and mix it into warm, chocolaty sludge. Kendra ’09 was wildly successful in convincing this guy, who poured about half a cup of lemonade mix into 2/3rds of a cup of hot chocolate. He seemed ok afterwards, as long as you didn’t look too closely into his pupils. 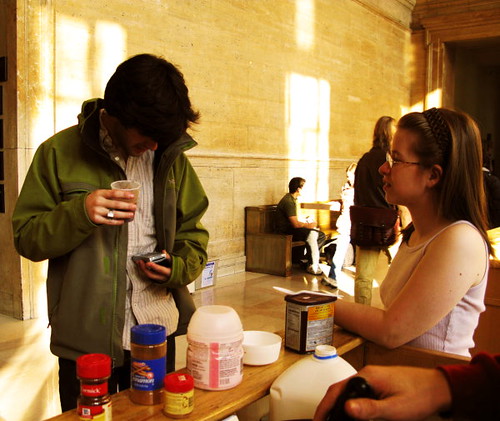 Lobby 10 is a stone’s throw away from the Admissions Office, so Kendra and I decided to thaw away the stress of college application season by (surprise!) more hot chocolate, personally delivered and lemonade-free. This is how I learned that Matt McGann has a giant log in his room for decoration, which is sort of trendy, actually. Someday, when I become a rich and successful admissions blogger, I’ll be able to buy aesthetically-pleasing wood. Someday. 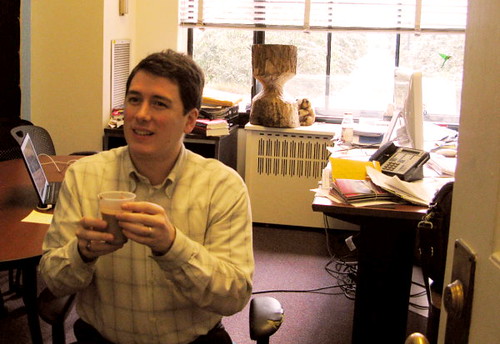 We ran out of milk eventually because all the cows ran away. “Cows ran away” is a common American idiom for “We didn’t buy enough milk at the grocery store”, in case you weren’t aware. 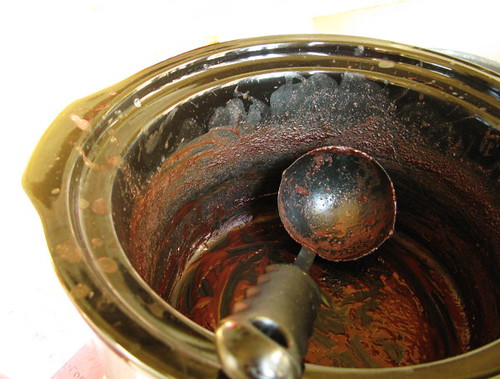 Unfortunately, my Internet just jumped over the cow-fence. That’s a common American idiom for, “This blog is so full of content that I have to stop now and make desserts for my dorm because I signed up for it two weeks ago, so I’ll post more later- hey, in the meantime, you should check out our laundry server.” You learn a lot of figurative language by reading this blog.

29 responses to “The Finals Blog”