Bela Bartok, a fluorescent rabbit, and Helen Keller walk into a bar. Stop me if you've heard this one.

Okay, I haven’t blogged all week… the last week of term here is next week, and teachers aren’t allowed to schedule any exams or major projects during this week if the class has a final. So, pretty much the entire week was dominated by the preparation of, implementation of, and recuperation from, my oral presentation on GFP for 10.28:

Saturday: Scored free tickets to the BSO through the college card program. They were doing an a program consisting only of works that were orignally commissioned for the BSO. I had no idea that this included Stravinsky’s Symphony of Psalms and Bartok’s Concerto for Orchestra, both of which I’ve studied a lot. MIT pays for college cards, so basically anybody willing to brave the icy winds across the bridge can grab free tickets to select concerts. In addition to this fine performance that included Dutilleux’s Symphony #2 and I HATE ELIOT CARTER’S Boston Concerto, the feisty Megan ’08 and I also found out Seiji Ozawa’s fantastic salmon recipe in the BSO cookbook. 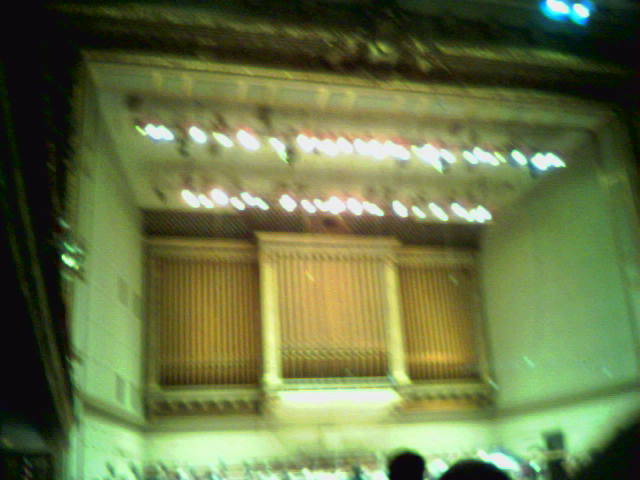 DID YOU KNOW? It was originally planned to inscribe the names of several famous historical composers above the stage of Boston Symphony Hall, shown above. Eventually, they ended up inscribing only Beethoven’s name, because he was the only composer for whom it was agreed that popularity would never fade.

Sunday: After a long, long, long desk shift, I was greeted my Sam’s Mom, who braved torrential snowstorm to come up and see the rest of the MIT Concert Choir and I perform Handel’s Messiah. It was actually her fourth concert in a week, after Patti Smith’s fantastic anniversary tour and two Christmas concerts of questionable quality by a prominent American Idol runner-up. After the concert, we settled into a lively discussion of Clay Aiken’s vignette-writing abilities at excellent neighborhood Italian vendor Bertucci’s.

Here’s the hilarious poster for this concert. 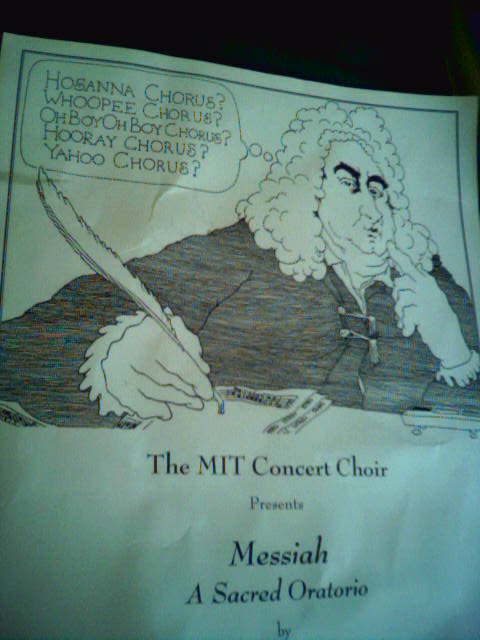 The concert featured professional soloists, and it’s always a joy to sing with them. In particular, tenor Jason McStoots has just about the most amazingly sweet, light voice that I’ve ever heard, tearing effortlessly through the high A’s on “Thou Shalt Break Them.” Go Jason McStoots. Be sure to hire him for your next major concert.

I try not to endorse things commercially on this blog, but seriously, Jason McStoots rocks.

Monday: Sam’s Mom stuck around long enough to take me grocery shopping at Star Market during/after classes and I bought like $120 worth of food. Why? I stock groceries for, like, nuclear winter… lots of canned goods. For the past few weeks, I’ve forgotten to buy juice, so any time I wanted to drink something with a taste, I opened one of my like 50 cans of pineapple. So, I mean, I totally ran out of all those, and had to buy some more. After a review session for the dreaded 10.302, I came back and got an e-mail from my future uncle JF Hamel saying that we had to submit all our slides for our 10.28 oral presentation “by this evening.” So, to google image search I went, and typed in “GFP.” Two hours and 28 slides later, I had a bunch of green bunnies and cell culture plates ready to send to him. Luckily, JF agreed with me in my assessment that “this evening” extends until at least 2 AM and readily accepted my slides, noting that they had a good flow and were very colorful.

Tuesday: I ran from yoga to building 66, only to find that 10.28 oral presentations for the week were in building 33, which sounds like it would be somewhere in the vicinity of 66 just because why would such totally random number not be right next to it, but actually turned out to be all the flipping way across campus. After watching 11 presentations that put my pitiful slides to shame and eating some fantastic catering courtesy of Susan Lanza (seriously, cheesecake, fresh fruit, baklava…), I practiced Steve Reich’s Tehillim for sight-singing lab on Friday, then I went running and headed home just in time for The Amazing Race, which was horrible but I feel like it’s my duty to watch one hour of television a week and it’s probably the best show on television. After that, I worked on my theme and variations for 21M.302 and finally at 12 AM, settled into studying for my 10.302 test the next morning.

Wednesday: 10.302 exam. That is all ye on earth know, and all ye need to know. I got up at 5 and took it at 7:30, and spent every spare moment in that time period looking over my notes. By the way, open-notes exams are actually to be dreaded. I did take a slight break to run a volume study on my pump and discovered that I should actually run it at 55.5, not 55 mL/min.

The test was actually the hardest thing I’ve taken at MIT yet, and that includes the thermo test last week that had a 46 average. I mean, wow. Luckily, talking to people afterward and a lot of people seemed to be making the same completely random, arbitrary simplifying assumptions that I was, so at least I did about as well as they all did.

Afterward, I settled into practicing my oral, including a disastrous 18-minute rehearsal of a 12-minute for Mitra and friends. Disheartened, I spent the rest of my night composing a German essay about living in einer Kleinstadt and studying fur meiner Prufung the next day.

Thursday: Wow. I have to thank all you readers of MITblogs, especially this entry, because it was you guys that inspired me to go out and find pictures of the GFP bunny and the freaky green mice and the GFP wreath to include in my presentation.

My strategy for my oral was to use humor to disguise my vast scientific ignorance with pictures and jokes… and surprisingly, for one time in my life, people actually found my intended jokes pretty funny. I think I just came off really well because everybody else’s presentation was about microbioreactors or diffusion studies and mine was about a GREEN RABBIT!! Nobody else could really use an image like that, just because of their choice of topic. So, hooray for pandering. Anyway, despite citing the same paper 3 times with 3 different dates in my slides, the whole thing worked our really well, and Dr. Hamel even held up a magic glow wand in the middle of my presentation in honor of GFP. No, I don’t really get it either.

After the presentation we all got to go right over to the 10.28 end-of-term dinner at Royal East… and if there’s ever a class that needed an end-of-term dinner, it’s 10.28 . Note the stacking of food on the table, on account of there being simply too much to place down. 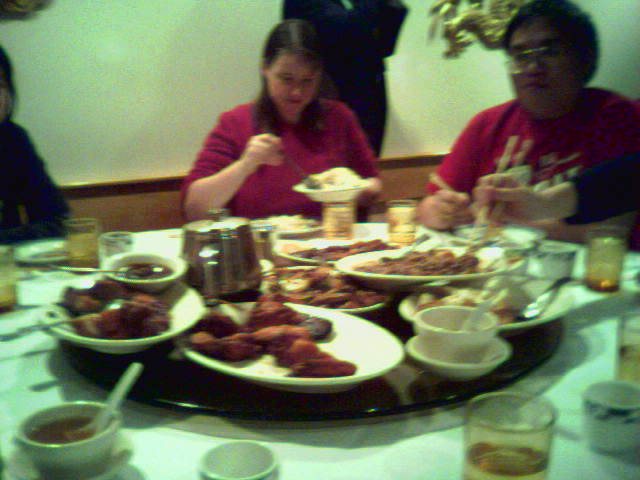 On taking this picture:
All: “What are you doing?”
Sam: “It’s uh, for my job….”
All: “How could your job possibly involve taking pictures of Chinese food?”
Sam: “Well, I write a blog for MIT admissions.”
All: “So, what do you say.”
Sam: “Well, I’m not really always truthful. I try to be positive. Like, I’d never say, ‘Instead of sleeping, I’ve passed on my floor in a fetal position for 5 hours every night this week.'”
All: “Oh… hahaha!”

That night, I finished up a 10.213 pset, put the finishing touches on my 21M.302 theme and variations, and memorized Mueller’s “Wanderschaft.” I happened to be working desk that night and somebody needed help finishing up his theme and variations too, so he brought a portable heyboard down to desk and I helped him out with that. Then I passed out in a fetal position on my floor for 5 hours.

Friday: Oh sweet Jesus, it snowed… and it looked like this: 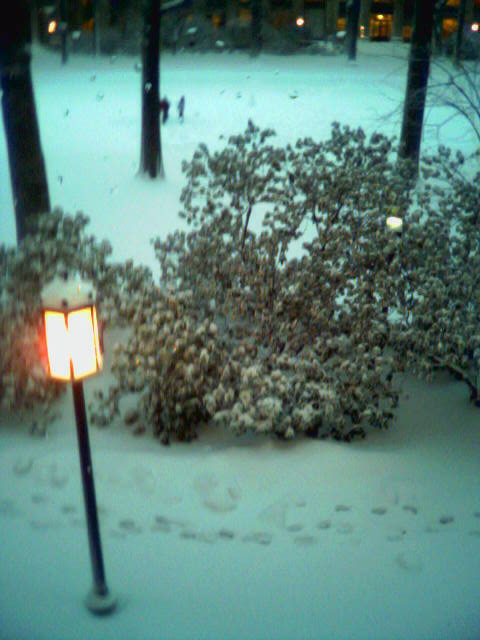 Early in the morning I handed in my theme and variations. This is the full three minutes and twenty seconds of what I came up with…

Then I went to German, where I heard a rap version of Die Loreley. I spent the rest of the day somewhat productively ordering 5-HMF to the tune of $25 a gram online for my UROP project and braving the terrible, torrential thundersnowstorm to get home (if German can merge words, why can’t I?). Also that night, I found my bike… parked in the exact same spot that I always park it. Huzzah for not losing my bike.

And that brings us back to Do (oh, oh, oh)… which you will hear about tomorrow.