Registration week was a heinous tangle of scheduling; seven (7) classes knotted my temporal ropes into a gnarly mess, wrapping up any loose pieces of slack time between 7 AM and 9 PM. After Thursday, my self-preservation instincts began sirening for me to pick up the scissors and start cutting classes. As Facebook would say, here’s the status update:

-Waves and Vibrations (8.03): Required for major, will keep.

-Intro to Cosmology (8.286): It hurts to drop this class, but four physics problem sets per week hurts even more. Perhaps I’ll give it another go in two years.

-Electricity and Magnetism II (8.07): Having spent 6+ hours on the problem set already, I’m reluctant to drop this class. I’m already 3% of the way to completing 8.07! Don’t give up now! (Bonus: Thanks to funding from the MIT Class of ’22, everyone in 8.07 received a free copy of The Maxwellians on the first day of lecture. On the second day, everyone received an electronic clicker so that the class could answer multiple choice questions in real time during lecture. By extrapolation, I conclude that 8.07 will give me a new car before October.)

-Intro to Black Studies: Turns out to be surprisingly engaging. Bonus: class participation involves a daytrip to New York City! Will keep.

-Intro to Comparative Media Studies: After an hour of lecture, my interest in comparing mediums had evaporated to the point where I really, really wanted to just go to the grocery store and compare medium-quality produce. I left early and arrived at the grocery store just as an employee was stocking the shelves with grapes ludicrously priced at 88 cents a pound. I’m sure CMS.100 is a worthwhile class, but grapes at 88 cents/lb might be an unfair comparison. Anyway, this class was dropped, and I had grapes for dinner. Twice.

-20th Century Composition Techniques: I stumbled into this class on a masochistic whim and loved it. Whether I add it to my schedule hinges on whether I have time to read the textbook and crank out a handful of Stravinsky/Debussy analyses before Tuesday. Were I taking this class next semester, I’d call this assignment The Write of Spring.

Ignoring the lumped mass of four problem sets, five textbook readings, half a novel, a music composition exercise, and two score analyses currently coagulating on my platter, I’ve been lately documenting my unreciped forays into experimental gastronomy. Throughout freshman year, cooking served as an expression of self-sufficiency and Ramen-avoidancy; nowadays, I’m trying to tighten my culinary grasp in order to make new and exciting friends. And by “friends,” I mean “food.”

Perhaps the inspiration for food as a creative catharsis came from the unabashedly sugar-saturated “Introduction to Undergraduate Women in Physics” event that I hosted for the Class of 2013 during orientation. Every year, MIT’s orientation coordinators organize a themed party/carnival/interactive infomercial in the Student Center for student groups to feed and bedazzle the incoming class. This year’s theme was Charlie and the Chocolate Factory, which I freely interpreted as a challenge for student groups to 1-up each other in distributing free candy to the 1000+ freshmen. As president of Undergrad Women in Physics, I armed our humble one-table booth for war with the Undergrad Math Association to the West and the Electrical Engineering Club to the East.

The secret weapon: Edible circuits- the intersection of technology and sugar. 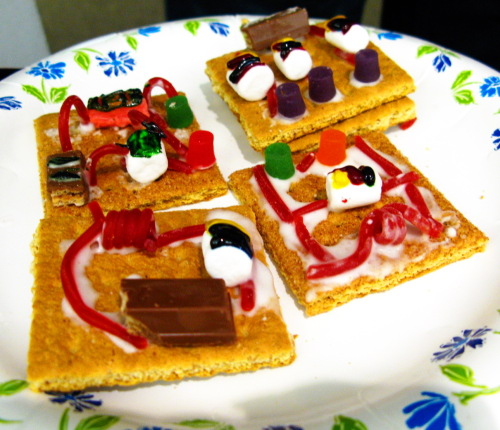 Some people come to MIT to learn the recipe for success. Ultimately, they learn that the recipe includes graham crackers, unpeeled Twizzlers, icing, marshmallows, food coloring, and gumdrops.

Halfway through, I came up with a gimmicky circuit board construction contest to encourage visitors build circuits out of food instead of eating it. The winner, as advertised, would be mentioned on my blog in no less than one relative clause. As it turns out, I don’t remember the name of anyone who submitted a circuit board to the contest, except for Sheila. Hi, Sheila. Furthermore, the winning circuit boards as judged by a panel of volunteers from the Undergrad Math Association and Undergrad Women in Physics were all built by either myself or Symone ’12. Oops. Looks like we succeeded so much that we failed. Success fail! 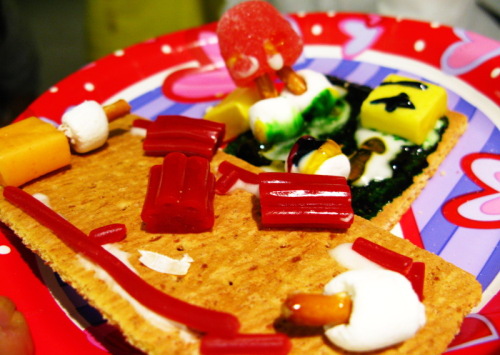 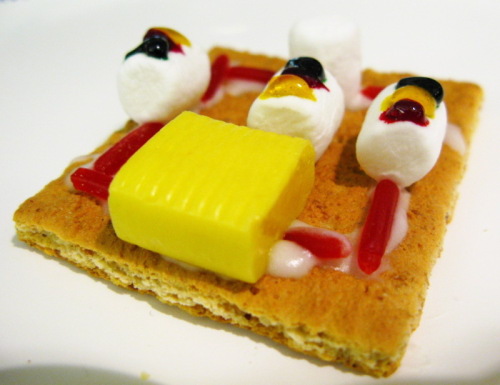 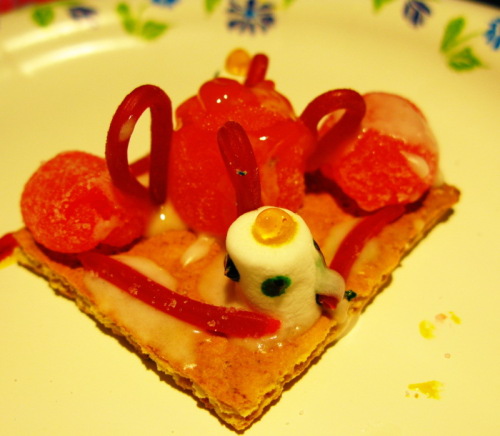 I’m not sure if I want the real-life version of this circuit inside anything I own, probably because it reminds me of a rickshaw. Honestly, I’m fine with having some device that contains three gigantic, unwired LEDs piled on top of each other in the middle of a circuit board where nothing is connected to anything, as long as I didn’t have to pay more than $9.99 for it. It’s just that this one looks too much like a rickshaw. Nothing personal, Sheila. I really do appreciate your attention to reflective symmetry. 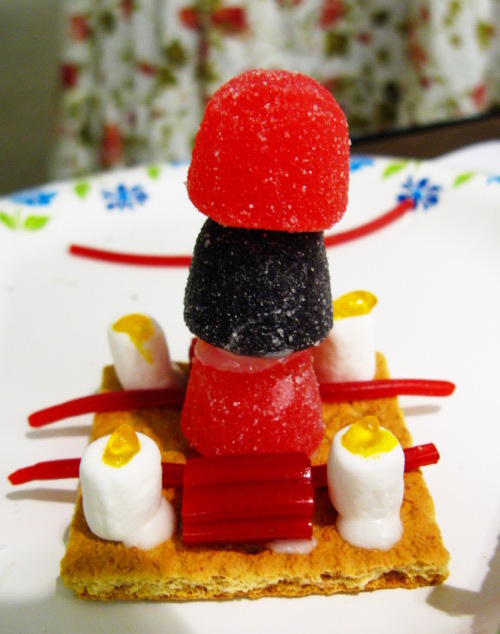 This was a short circuit. It’s also a blurry circuit. 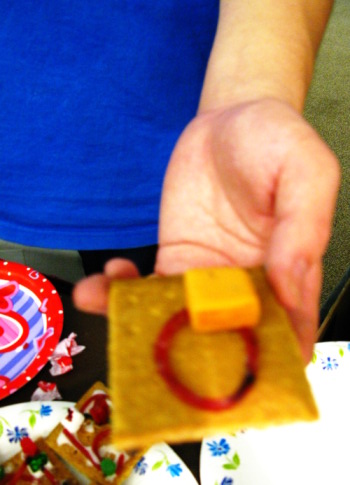 Greg ’12, not to be outdone, responded to the above by building a “short” circuit. It’s not even a circuit, so Greg loses anyway. Sorry, Greg. Better luck with 6.002. 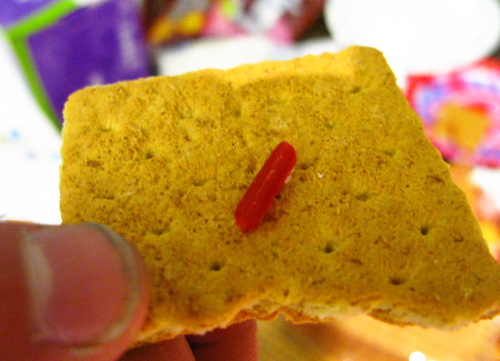 “MisLED: A Study in Unconnected, Non-functional LEDs” by Symone. 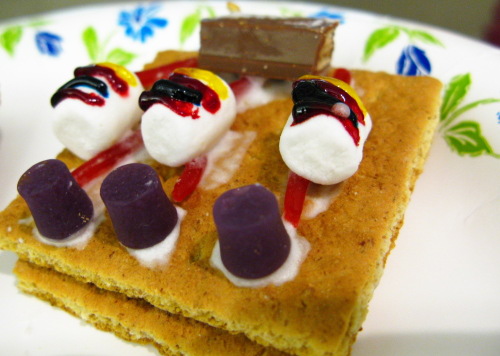 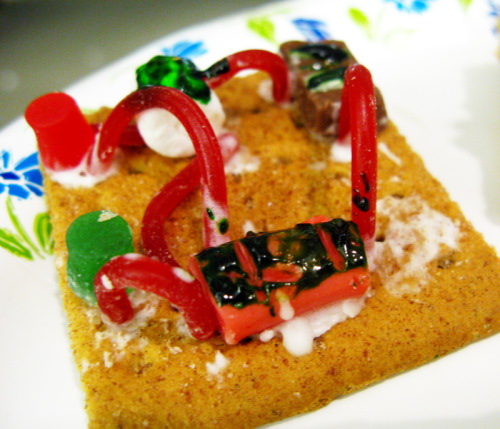 Scarcely 5/14th of a fortnight later, Alorah ’11 and I threw a bacon party at pika. A bacon party is exactly what it sounds like, except with more bacon. For hor d’oeuvres, I served a tray of grilled melon and peaches wrapped in bacon. 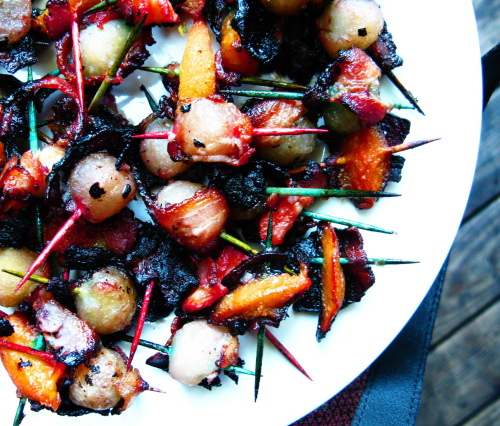 I accidentally burnt the bacon-wrapped fruit in the oven, which added a smoky carcinogenic musk of charcoal to each bite. 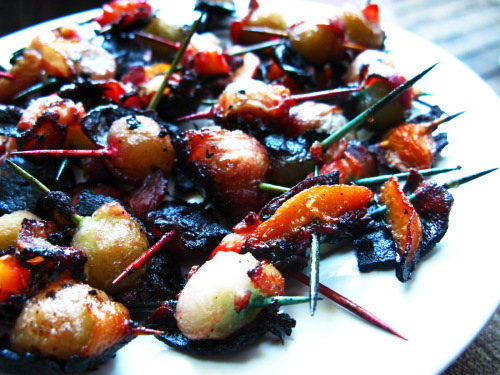 In a moment of divine inspiration, I was left unattended in the kitchen in the company of a lovely organic pie crust, an equally lovely bag of organic apples, and a pack of fat-streaked bacon. With a few plentiful shakes of cinnamon, a glaze of agave nectar, and a wink of patriotism, I had this: 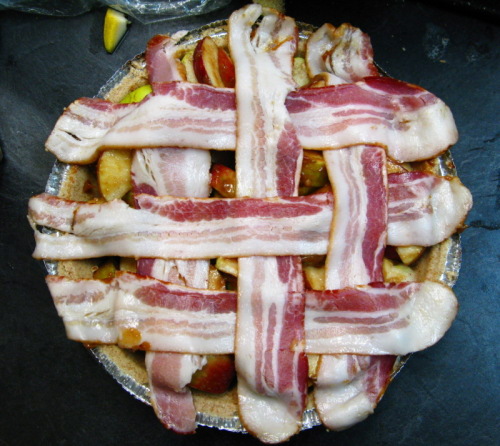 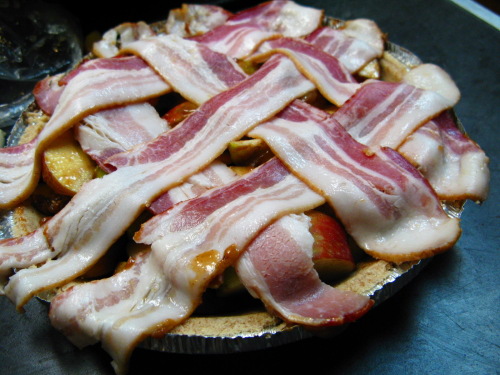 I popped it into the oven until the bacon was crisp at the edges and still dripping with sizzling pork juice in the chewy inner folds of each salt-sweaty strip. For the finishing caress, a drizzled spoonful of melted caramel sauce was swirled over pork and apple like a silky ribbon. 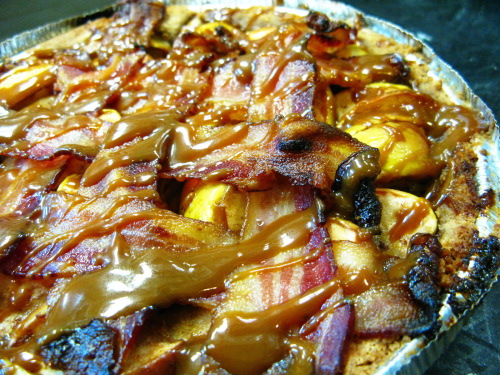 It turned out to be inadvertently delicious too, albeit murderous. 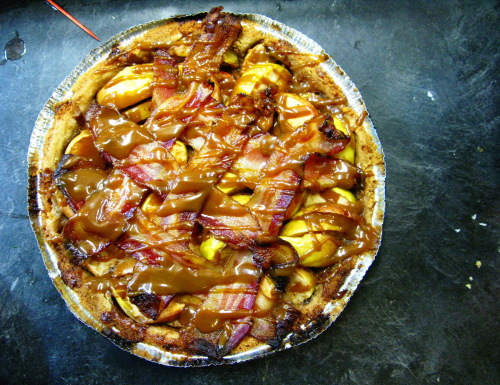