I don’t know about you, but I had a pretty awesome weekend.

First of all, I checked my exam grade for 18.01 on-line. Then I started running around the room and up and down the stairs to tell Becky and Sam. Why’s that?

Because I got the highest test grade I’ve gotten at MIT by about… 16 points. 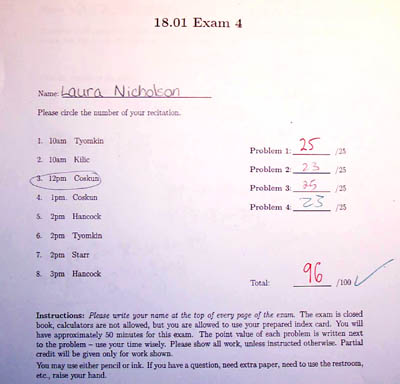 but then you zoom out….

but then you zoom out…

Friday night Sam and Becky and I walked into Boston to have a wonderful end-of-week meal at the appropriately named TGIFriday’s. Friday’s is just about my favorite restaurant of ALL TIME, so I was pretty psyched about that. I got the sizzling chicken and cheese, like I do every time. Why? Because it comes with a side of mashed potatoes. You just can’t argue with that.

Despite being my favorite eating establishment ever, Becky did find a random piece of metal in her food…yikes. But Becky’s chill and didn’t care anyway, plus she got a free meal out of the deal! And free dessert. Which she didn’t really want so Sam and I just ate most of it for her.

We hurried back from dinner in order to make it to SaveTFP‘s weekly Friday night event. This past Friday was hosted by Laura Stuart, who, aside from having a great name, works for MITMedical and is most well-known around campus for being the go-to-woman for questions regarding sexual health. Friday night she gave a presentation about sex toys. No joke. She brought in examples and everything.

I’ll be tasteful and not go into too much detail, but while we’re on the subject I’d like to bring up the point that MIT is super-open about sexual health. (Um, obviously. See above.) We chatted with Laura Stuart a little before her sex toy presentation, and you can tell right away that she’s really easy to talk to, even about topics that can make some people uncomfortable. Some friends of mine who were thinking about becoming sexually active basically just visited her at her office and had a little chat about safe sex and contraception. Three cheers for responsibility, right? They came back with booklets of information and free condoms. Speaking of, those things are everywhere. If you can’t find them, you’re just dumb. Sometimes I think MIT spends more money on condoms than anything. Really. Anyway, MIT takes sexual health seriously. I’m not sure if this makes parent readers more or less anxious, so I’ll just leave it at that. =)

Steven asked, “I’m told i am exelent in math and reading, and above standard in science, but my english and writing skills… Lets just say they are not up to par. Will I still be considered or must i be dissillusioned?” To be perfectly honest, it depends exactly what you mean by “not up to par,” which is a pretty vague description. =) Seriously though, you can’t get too hung up on the details of your test scores. Besides, most MIT students score higher in math and science than english and writing (check out section C9 of that link). In any case, you never know unless you try! If you’re really concerned about your scores, you may want to address a more specific question to Ben or Matt.

Edward wrote: “But I do think I kinda agree with John ’08 I dont know why :-) PS: Which is better:
a) tackling psets alone
b) doing psets as a group”
Hey now. Don’t go bashing my cooking when you haven’t even eaten it and then ask a question and expect an answer! =P How you tackle psets is a personal preference. Some people feel the need to work everything out for themselves, and some people need to have other distra- I mean, classmates around for help. I’m a firm believer in method #2, personally, but it varies. I also apologize for the fact that this doesn’t really answer your question at all. I will say that most professors expect and encourage collaboration on psets, so they make them really really hard. Which is so uncool.

Emi asked, “What other interesting classes are available for HASS credit?” which is a pretty hefty question, so I’m putting it aside for now until I can properly research some of the course offerings. In the meantime, feel free to poke around the websites of the different HASS departments, which are listed here.

In response to my nutritional documentation, Nurlan sad “no vegetebles. i will feel myself as if i m punished.” I don’t like vegetables. Except for potatoes. And I eat plenty of those by buying those microwavable cheddar cheese potato boats from the supermarket. Yum. Mushal basically wanted to know how I don’t starve to death. I guess I don’t require as much food as most people in order to function, but I definitely don’t go hungry. I also have a practically bottomless supply of granola bars and pop-tarts, which I’m constantly eating between meals. And one bowl of cereal per day is the bare minimum. It’s usually more than that. =)

Tomorrow I have a super-cool adventure planned, but it’s top-secret! (I’m really just saying this so that if it doesn’t work out I just disappoint myself and not all of you as well. Then I can make something up in order to not look like an idiot!) So stay tuned!

8 responses to “What did YOU do this weekend?”