I have done exactly three things since winter holiday ennui sprouted all over the dessicated grids of my post-semester calendar:

On second thought, make that four:

4.Unsuccessfully re-installed MATLAB (twice) because my license keys obnoxiously expired while I was busy playing minesweeper* or something likewise pre-installed and useless.

*I kid, because I have swept nary a mine since bidding goodbye to the tender age of microwaved pizza rolls, Windows 98, and messily penciled sonatas of elementary algebra on crumpled graph paper. Years ago, I convinced myself that minesweeper was prototyped during the Vietnam War to sharpen the reflexes of future army enlistees, and that Bill Gates had cleverly developed a way to hook up my parents’ computer to mine-detonators in remote Third World countries. When I first learned the word “career,” I imagined myself as a top-secret military agent whose patriotic duty was to sit in front of a CRT monitor and play minesweeper to protect U.S. troops from setting off hidden mines in the Midwest or whatever. If I cleared one of the smaller minefields in less than 10 seconds, the government would issue me a bunch of yellow smilie face stickers and a “HIGH SCORE” certificate.

Every Christmas morning, I momentarily revert to my childhood definition of an agnostic (me) as someone who regards God’s existence as unknowable due to lack of sense-based observations and Santa’s existence as obvious due to presents-based observations. This year, however, the solid grounds of my agnosticism turned to swamp when I noticed that Santa hadn’t visited my house and left me a licensed copy of MATLAB.

“Santa doesn’t exist,” you interject. (By which I mean, I interject on behalf of you since you can’t leave a comment on this blog before I finish it. Furthermore: FIRST.) Normally I’d agree with you, but at this transitional, trans-semester stage in my life, I interpret Santa as a wave function whose time component peaks around Christmas season and spacial dependence peaks in countries with a large population of Christians and high GDPs. The fact that I didn’t get a present this year is simply the result of the Santa wave function experiencing destructive interference with economic recession.

Nonetheless, I’m the first to admit that “Santa Clause is Coming to Town” is much more metrically flexible than “Santa Claus’s Probability Distribution Has a Local Maximum in Your Vicinity.”

Furthermore, I’ll concede that the Santa function is complex and probably has a sizable imaginary component. It may be renormalizable, but it won’t renormalize your family’s opinion of you as you explain to your 5-year old cousin the dual nature of Santa as both a wave and a barely-employable guy at the local mall.

Anyway, while I was busy drafting the lyrics to “Carol of the Bell Curves,” “Deck the Hall Effect,” and “Do You Hear What I Hear, Or Do Our Observables Fail to Commute?” an anonymous commenter on my previous blog queried:

can you summarize
your other activities
outside of classes?

(i figured a bit of e.e. cummings would grant me some internetz)

I slept, sometimes. Other nights, I’d stay awake and think about a nice, rustic loaf of bread.

*UWIP = Undergrad Women in Physics
**FASAP = Freshman Arts Seminar, an advising program that paid for countless free dinners and concert tickets last year. Highly recommended, even if I don’t remember what the “AP” stands for.
***ATS = Association of Taiwanese Students. I am neither Taiwanese nor an association of any sort, but thanks to ATS, I’m now Taiwanese by association.
****Katelyn Gao = my former roommate, not an acronym.

In the past week, I’ve splurged a semester’s worth of energy, motivation, and Googling on amateur breadmaking. After 19 hours of tango with mercurial thermostats and Schrodinger’s yeast (is it dead or alive? I can’t tell), I tossed Loaf #1 into the oven with a hearty dash of pessimism, clocked off 30 minutes, and pulled out:

A lithospheric formation of charred crust, high density, and too much compression in the . . . um, upper mantle. 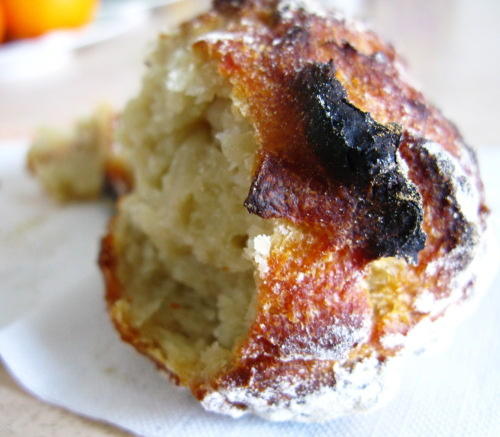 Loaf #2 turned out better after a 25-hour rising period. Biting into the bone-thick, morbidly crunchy crust to pillow your molars on the soft spongy tissues of dough inside was like experiencing the most delicious dental surgery ever. 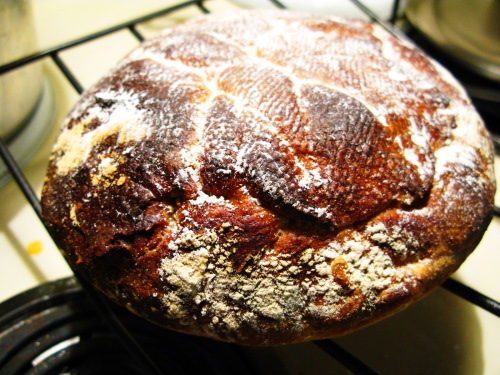 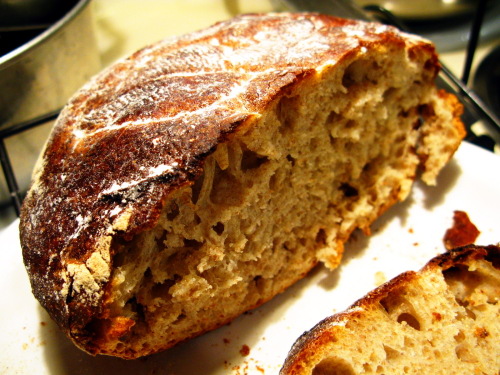 After two nights in a plastic-wrap cocoon, Loaf #2 was reincarnated in a casserole dish under 375 degree heat. A modest serving of leftover bread stuffing with apples and red onions inexplicably wore the aroma of red wine like a secondhand dress from a seamy thrift shop. I’ve come to accept the strange personality flips of maturing yeast. 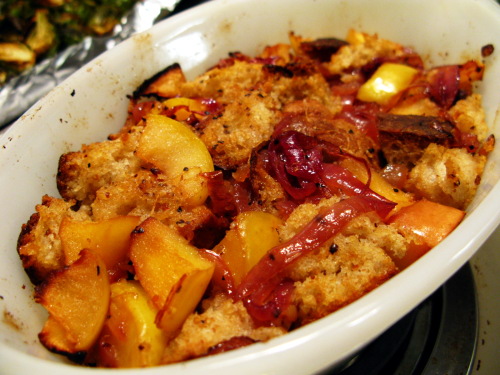 In context, the stuffing made a terrific pairing (tripleting?) with sweet coconut chickpea curry and roasted brussels sprouts, the dinner I cooked for mom on Dec. 24. 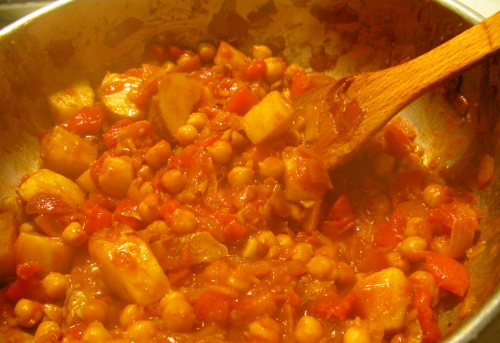 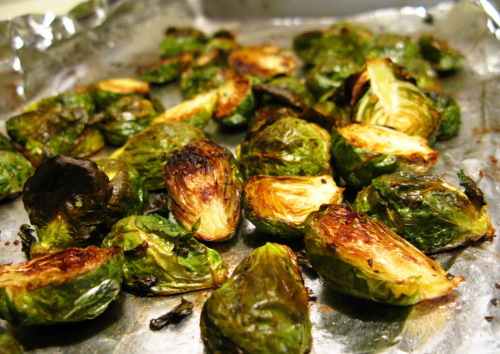 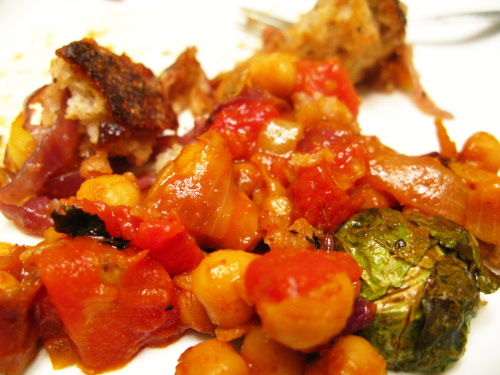 Interlude: The rest of the coconut milk from the curry went into a cauliflower flatbread, because I was getting fed up (figuratively) with yeast getting fed up (literally). If you understood the previous sentence, congratulations. 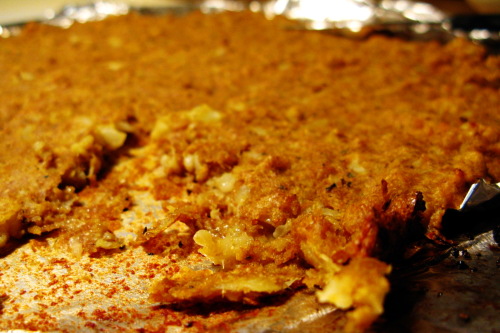 The dough for Loaf #3 chillaxed in the fridge for two and a half days in hopes of coaxing the lively, nostril-curling flavors of sour yeast from a wet marsh of flour and water. 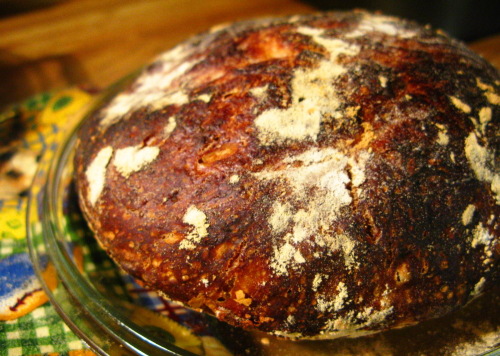 Yet again, I forgot that the thermal regulator on my oven had been clinically diagnosed with Attention Deficit Disorder. Volcanic bursts cracked open the marred crust as the thing was cooling on the rack. 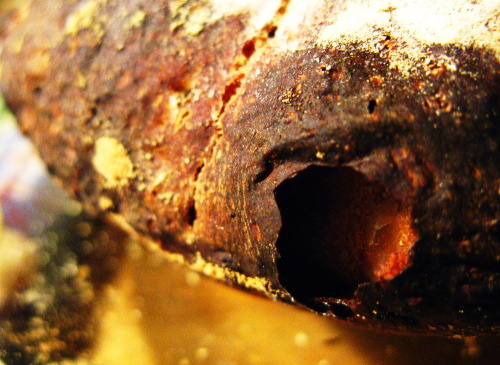 The loaf was tastier this time but still not French enough to belittle me. Isn’t there a French proverb that goes something like, “A good loaf of bread is condescending toward the cheese”? (I hope not, because I just made this up and I think it sounds copyrightable.) 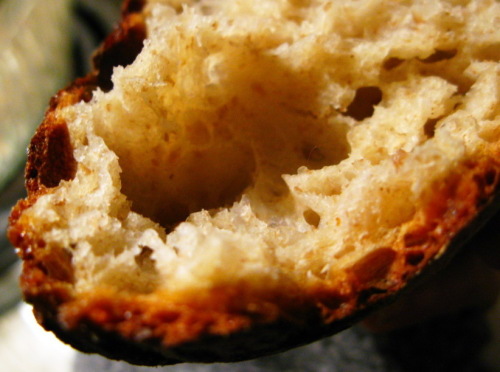 And that’s what I did over Winter Break. I baked bread that wasn’t condescending toward the cheese.