Reporting on location from Fort Worth. 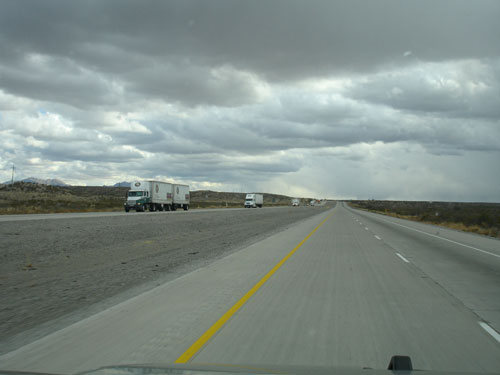 (Only in Texas can you legally drive 80mph on an Interstate highway!)

This week, I drove about 1200 miles from my house in Arizona to the Fort Worth, Texas area, where I’ll be spending all of IAP (and the summer) interning at the headquarters of North America’s second-largest railroad, BNSF. I start in a few hours. Now ordinarily, the trainman wouldn’t be driving, but I’d be stuck walking to work otherwise… there’s no subway around here and if you want to get around, you need a vehicle. I guess that’s life.

I’d never driven that far in one shot before, and certainly not in two days. It all worked out fine, though, and I’ve been hanging around the home of my boss-to-be while he and his family are vacationing. I had some great Tex-Mex food the other night, too. It’s kinda neat to be able to go wherever you want, whenever you want, even if that involves a greater-than-walkable distance… can you tell I’m rediscovering the joy of motoring after using nothing but the MBTA and Amtrak for twelve months?? Maybe I’ll have to bring a car up to Boston after all… (uh oh!)

So why not stay around MIT for January like most people? It’s not like I’m spending time with family instead, a popular alternative for some. I actually had the choice, but this seemed like a compelling prelude to the summer period, when I’ll be working here for three straight months. And it’s a month’s worth of extra salary, which isn’t a bad deal, either. Ironically, the guy I’ll be working for is an alum of MIT’s transportation master’s program, and he studied under several of the faculty I know personally. The son of my advisor from last year was one of his classmates. Small world.

I’ll provide a few updates as time goes on. I bet you all are relieved to have finished those applications! Now you just sit back and wait. *grin*…………..

7 responses to “An IAP in Texas, chapter one”