i didn't waste 60 hours playing for nothing

slight overestimate since sometimes i keep the game open without playing

Let me explain the phrase “deckbuilding roguelike”. A roguelike is a kind of video game where you control a character and fight monsters in randomly generated levels. Key word here being randomly generated; the game is different every time. The other key features are being turn-based rather than real-time, meaning you can take as long as you want to make decisions; and having permadeath, meaning once your character dies, you have to start over from the beginning. The archetypical example, and namesake, is Rogue.

A deckbuilder is a kind of card game where you maintain your own deck of cards, separate from other players’ decks. In a deckbuilder, you’d draw cards from your deck at the beginning of your turn, have a set amount of energy or money that you can use to play your cards, and then all of the cards go to a discard pile. You add When the discard pile runs out, you shuffle them back into the draw pile. and remove cards from your deck through the course of the game. The archetypical example is Dominion.

And Slay the Spire just… combines those two. 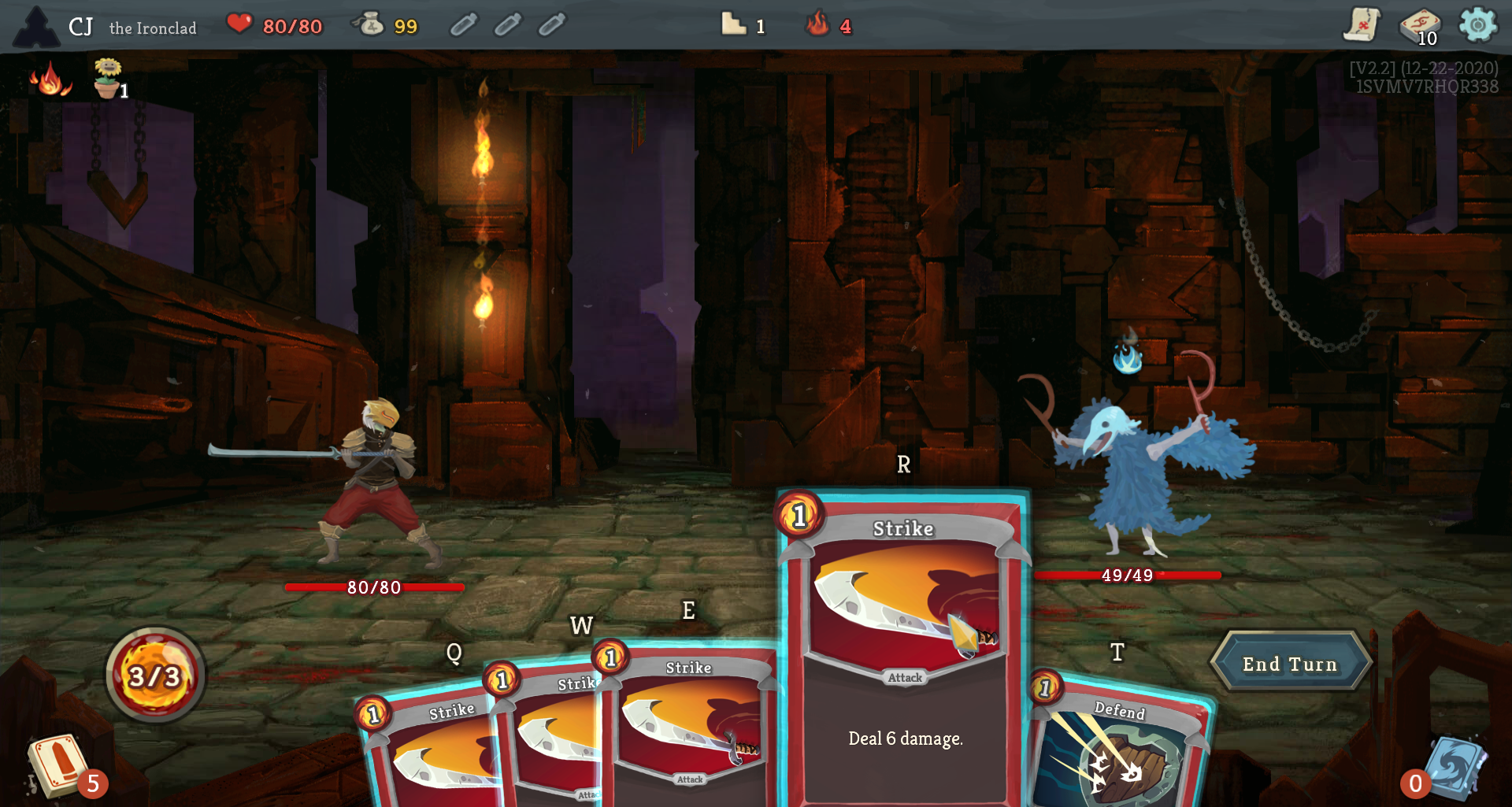 You are an adventurer ascending a spire in order to slay it. Your cards attack and defend and do all sorts of things. Beating enemies allows you to put more cards in your deck and earn gold that can be spent on shops. Each act has sixteen floors, the last of which is a boss fight; beat three acts to win a run. 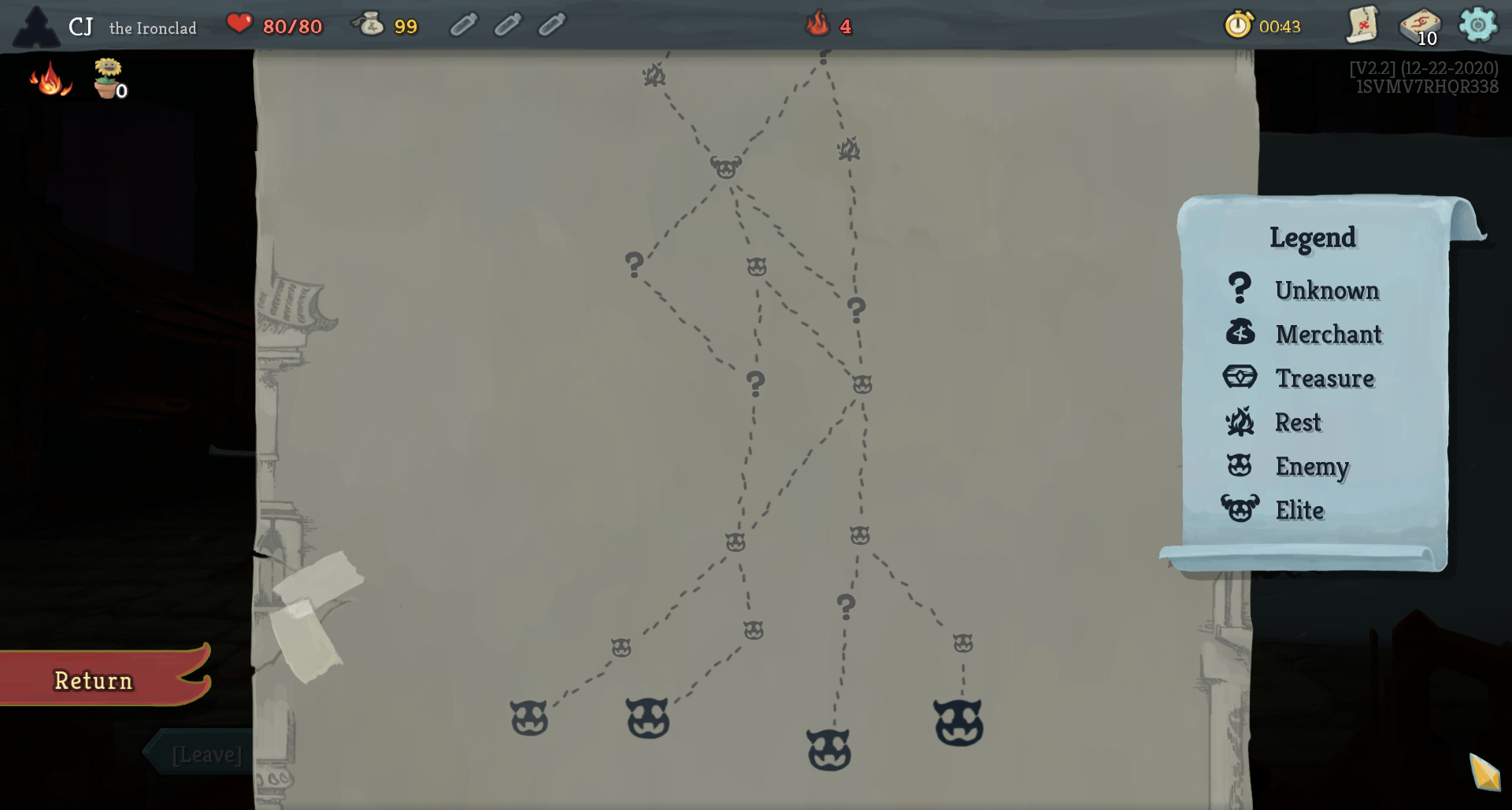 so many paths, which one to pick 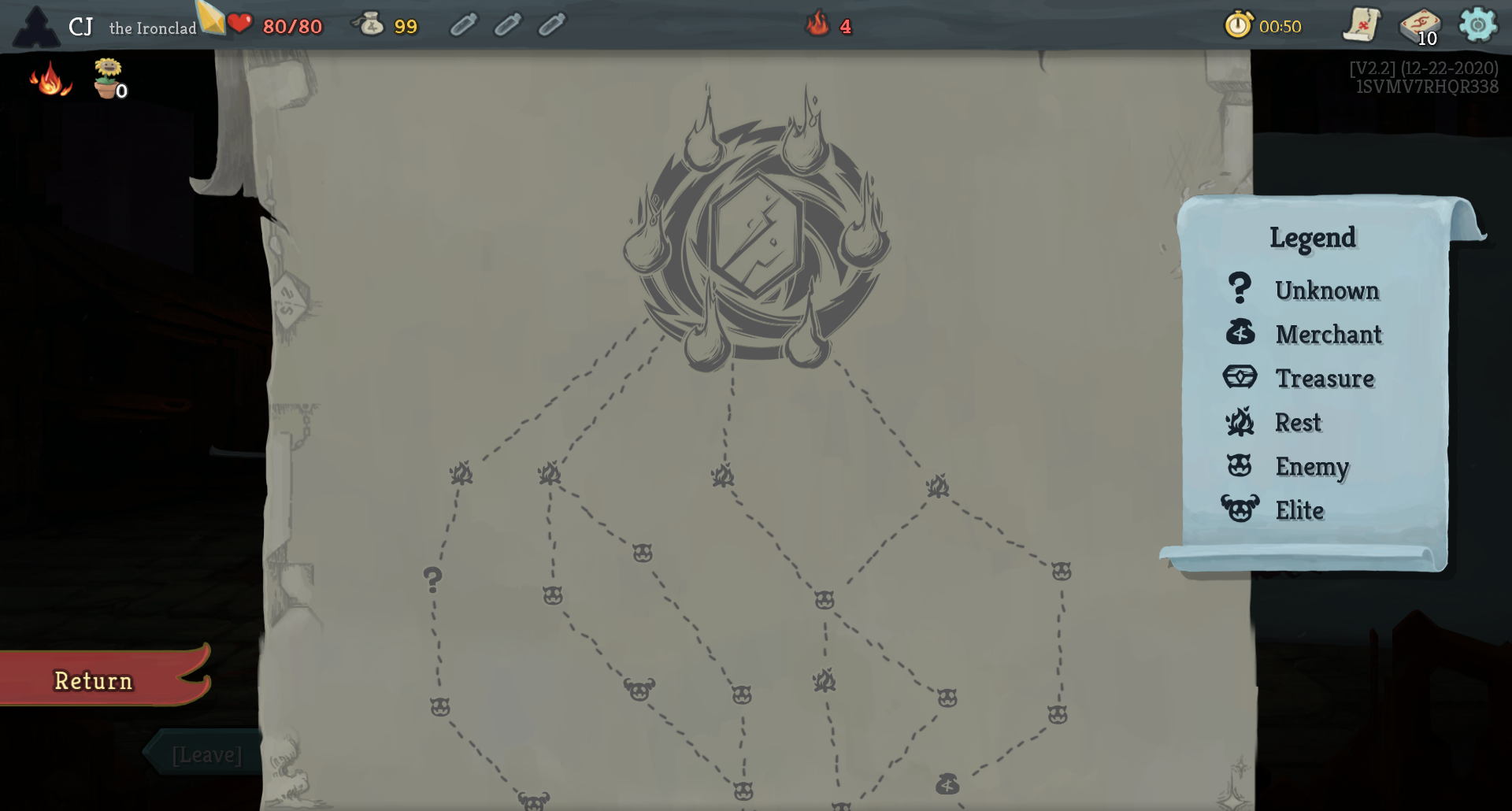 that hexagon symbol is the boss

The game does not have spectacular art, music, or story. But what it lacks in those departments it more than makes up for in its gameplay, where simple cards and relics and potions interact in fascinating, emergent ways. Every decision feels meaningful. Should I take these cards and make my deck larger, or should I keep my deck small so I have more consistent draw? Should I trade half my health in this event for some powerful cards, or should I save it for an upcoming boss fight? Although the game is difficult, it is rarely unfair; when you lose, you can often pinpoint where you went wrong.

Anyway, I’m bad at transitions, so here’s the main topic of the post: some observations about Slay the Spire, and how they can vaguely apply to real life. 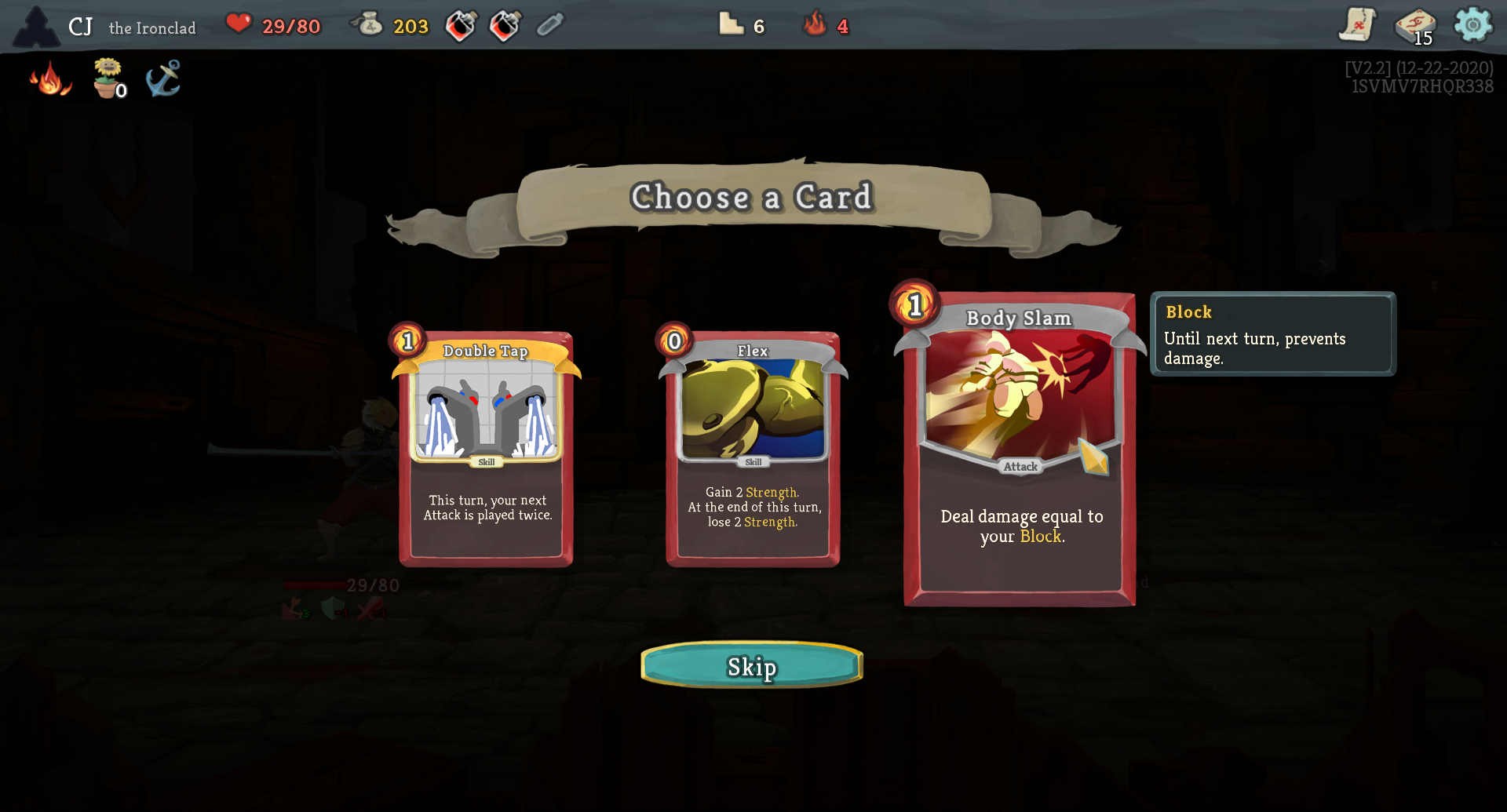 Boring beats awesome if it’s more practical. Sure, Double Tap is a cool card. Playing an attack that deals 30 damage twice is really strong. But you have to ask: is it what the deck needs right now? Does it work well with the cards you already have? Does it fill in a gap in your deck that can potentially kill a boss? Sometimes it can, but sometimes, you’d want to pick a card like Body Slam, which can scale the amount of damage if you can scale the amount of block you have.

One of the biggest lessons I learned in ESP is the importance of a program’s logistics. Back in high school, I used to think the hardest part about running a competition was problemsetting, and so I admired good problemsetters. When I first started contributing to HMMT, I thought my biggest contribution would be writing problems. So I was really happy when I got a problem on an HMMT test, and yeah, people noticed it and complimented me for it.

But I think most of the satisfaction I get from HMMT comes from things that aren’t problemsetting or testsolving. It takes a lot of work to set up a venue, coordinate with sponsors, make registration exist, usher people around, send a dozen emails, or check hundreds of papers. I still think problemsetting is important, but honestly, I admire the people who handle the logistics just as much, if not more, than problemsetters. 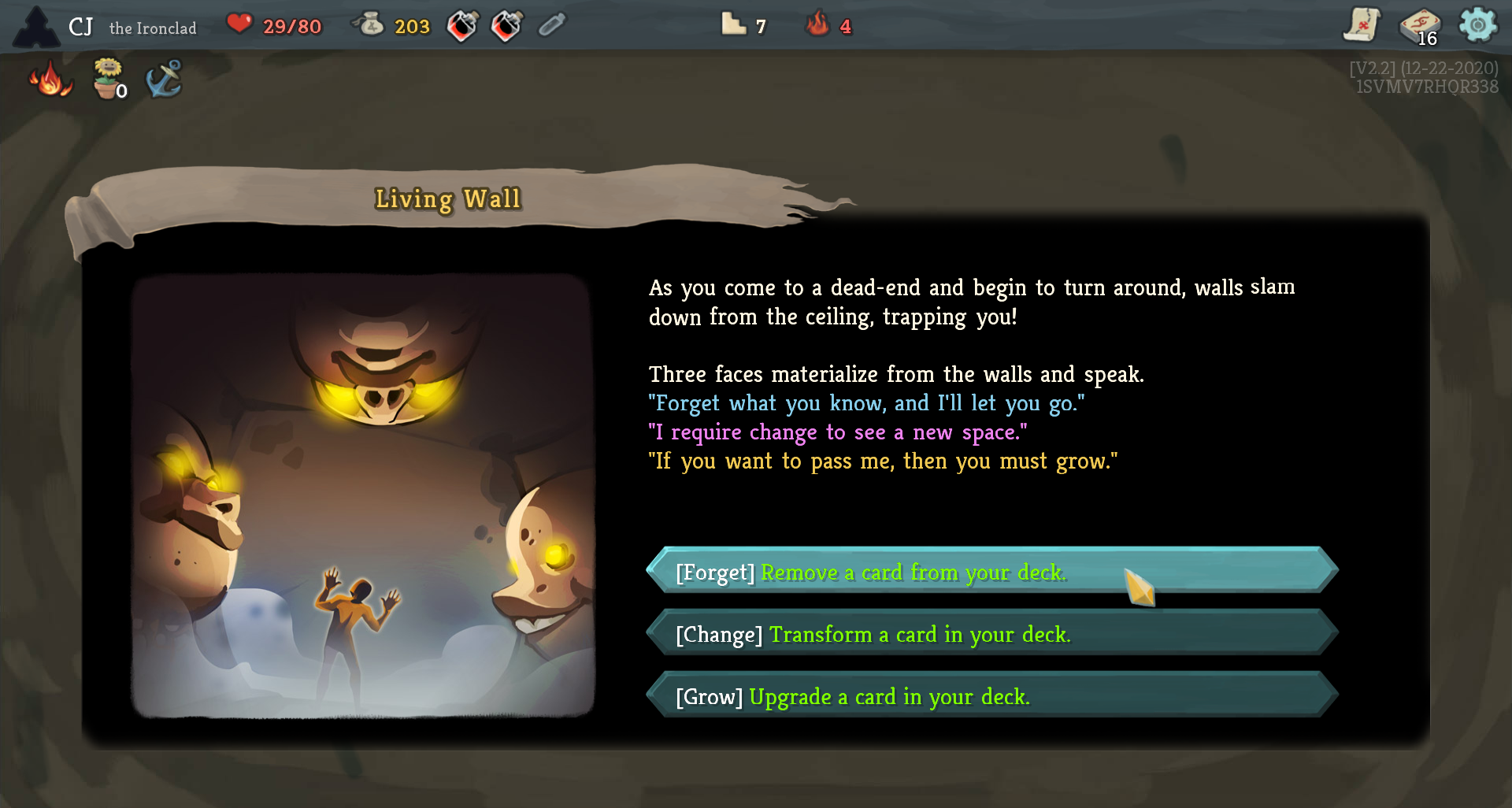 transforming a strike isn’t a bad choice here either

This is one of the concepts I struggled with understanding when I first played Dominion. In Dominion, you begin with seven Coppers, which are cards that give you one coin when played. An important part of Dominion strategy is removing these Coppers from your deck. This was counterintuitive to me at first: why would I want to remove cards that give me money? The fact is, you only have a limited amount of cards you draw each turn, and removing weak cards from your deck raises the average strength of a card you do draw. 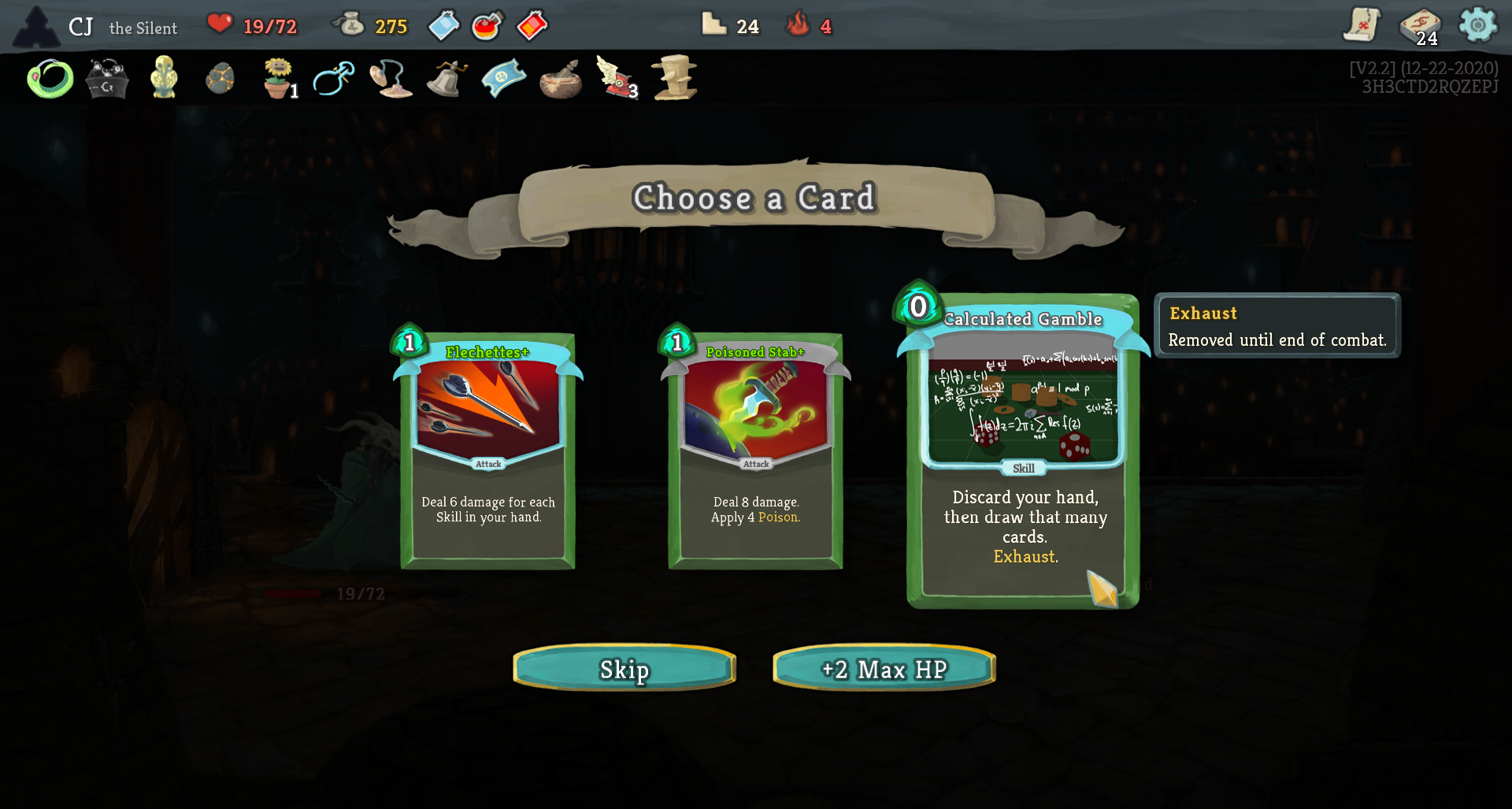 this is alternate card art for calculated gamble, which i think is better than the actual art

For example, even if enemies’ actions are decided randomly, you almost always know precisely what each enemy will do in its next turn. Enemies also have a somewhat predictable AI that you can manipulate. Or even if cards are random, you know that the first few turns you draw you’ll go through your entire deck once, and you can control this randomness through drawing and discarding and scrying cards. There are even more subtle sources of randomness you can pay attention to, like the probability of getting a potion after a fight or the chance of getting a rare card.

Slay the Spire gave me lots of practice with thinking in probabilities, which I think is a widely applicable skill. I’m looking at my deck with seven cards, knowing I’ll draw five cards next turn, deciding what to do this turn. In almost all cases I’ll draw enough damage to trigger defensive mode, or, if I don’t play this card now, two times out of five I won’t have enough block next turn, or is it worth it to spend an extra energy for a slightly better chance to do lethal? 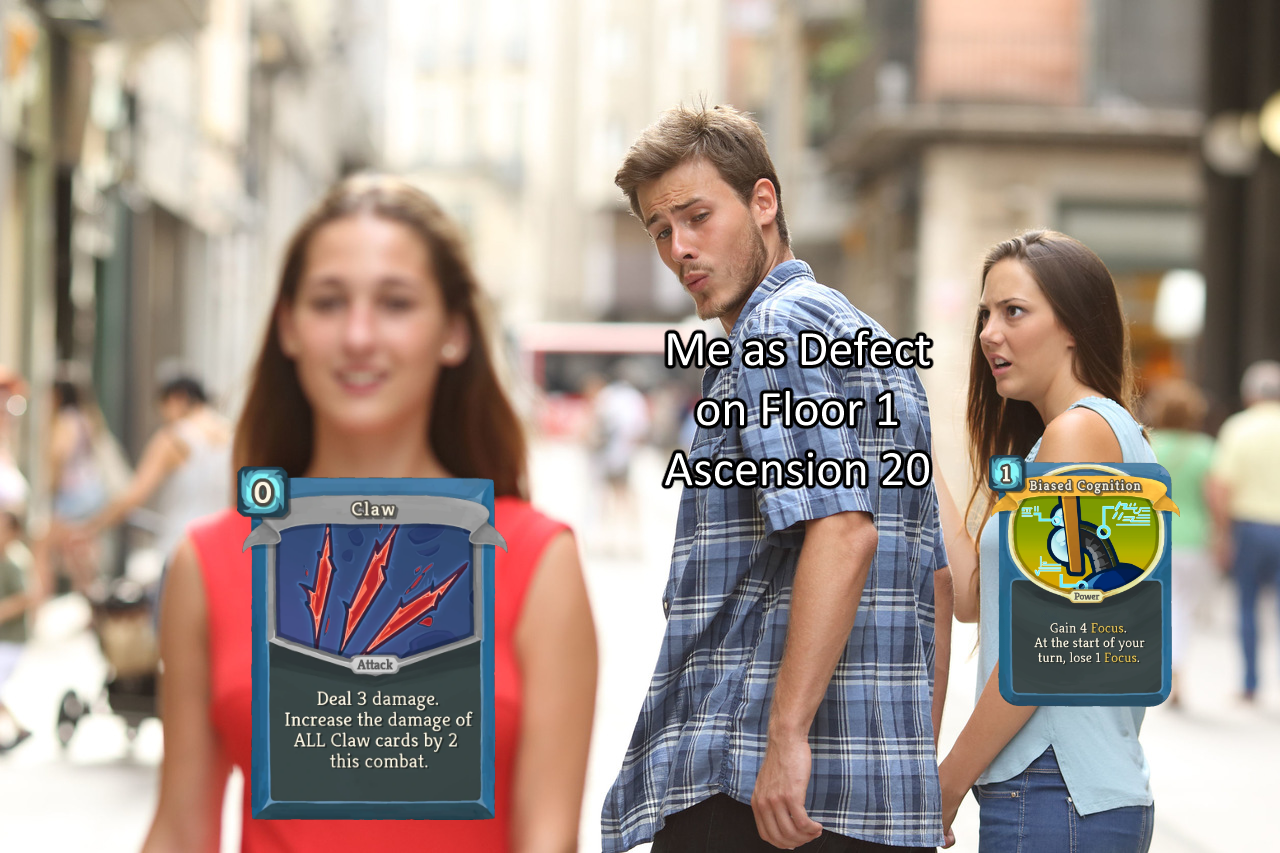 Don’t lock yourself into an archetype. Claw is one of those meme-status cards for the Defect. It’s alluring to play a zero-cost card that increases the damage for every other Claw card every time you play it. The dream is that you end up with a deck with a bunch of Claw cards and card draw and then you can just keep playing Claws over and over again. Unfortunately, it’s often the case that you get one Claw card, and if you’re lucky, two.

The reality is that, unlike Magic the Gathering or other constructed card games, it’s far more difficult to get the cards you want in Slay the Spire. There are 75 different cards per character and you only see 3 after each fight. So you often don’t want to build towards a specific archetype, instead choosing cards based on what your deck needs.

And, well, I wrote an entire post about not locking yourself into an identity. You can’t box your personhood in a handful of words, much less expect those words to describe you forever. Sometimes life changes you, or you find out you’re a different person than who you thought you were, and you just have to roll with it. 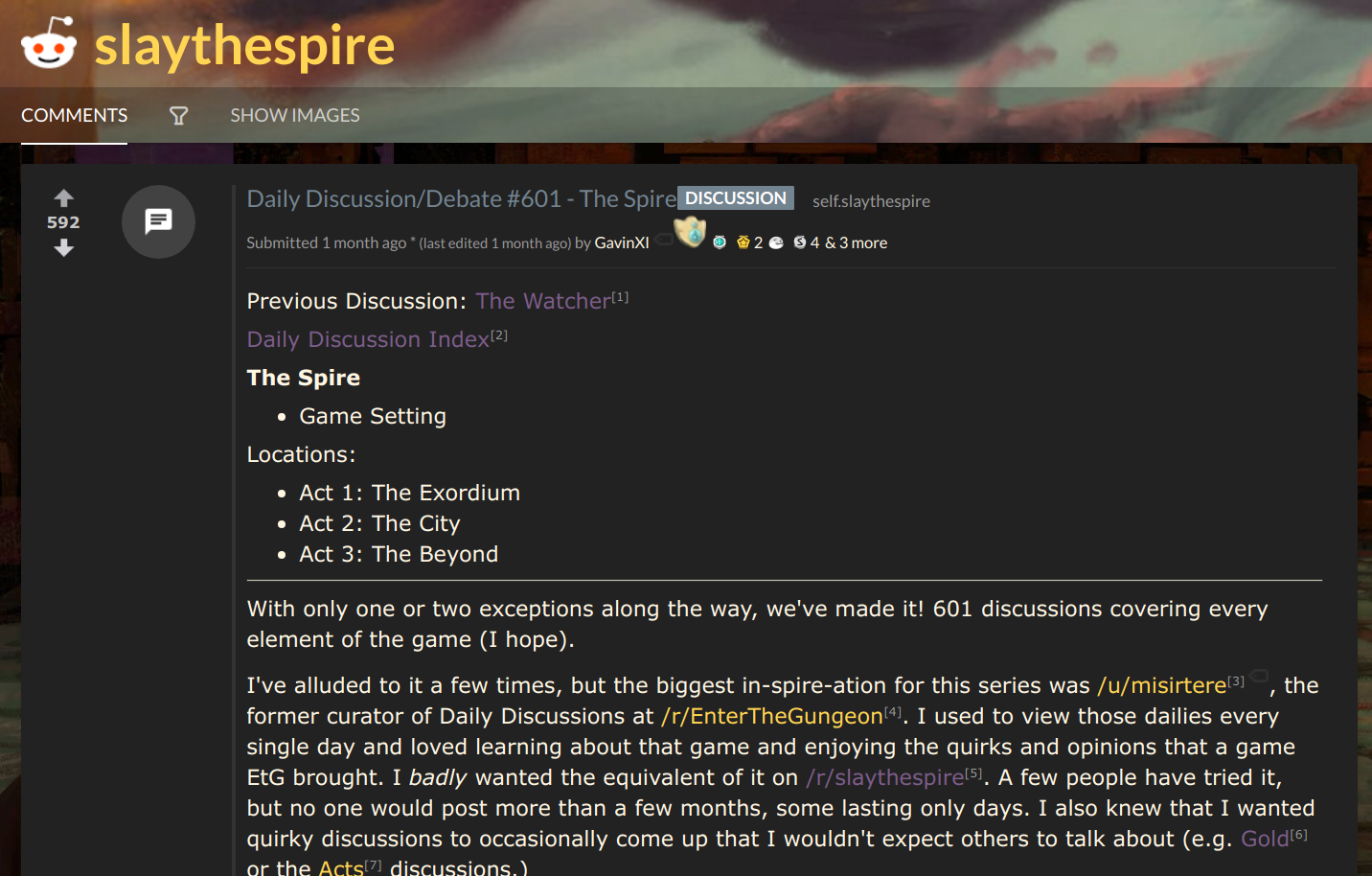 Communities are great. There are lots of fabulous resources that the community made for Slay the Spire. In the game’s subreddit, one person made a daily discussion post for six hundred days in a row. There’s a fantastic Slay the Spire reference spreadsheet and a comprehensive Slay the Spire wiki. And there are lots and lots of good memes.

The reason I started playing Slay the Spire in the first place was because I had some friends streaming it regularly in a Discord server I was in, and I thought it looked fun. Early in the game I was struggling to play the Watcher character, so I went to the server, streamed myself and said, “hey, can someone help me play a Watcher game and explain each decision?” That one playthrough really helped me understand the Watcher better.

I don’t think I need to explain this one too much, but really, when people say one of the best parts of MIT is the community, they mean it. 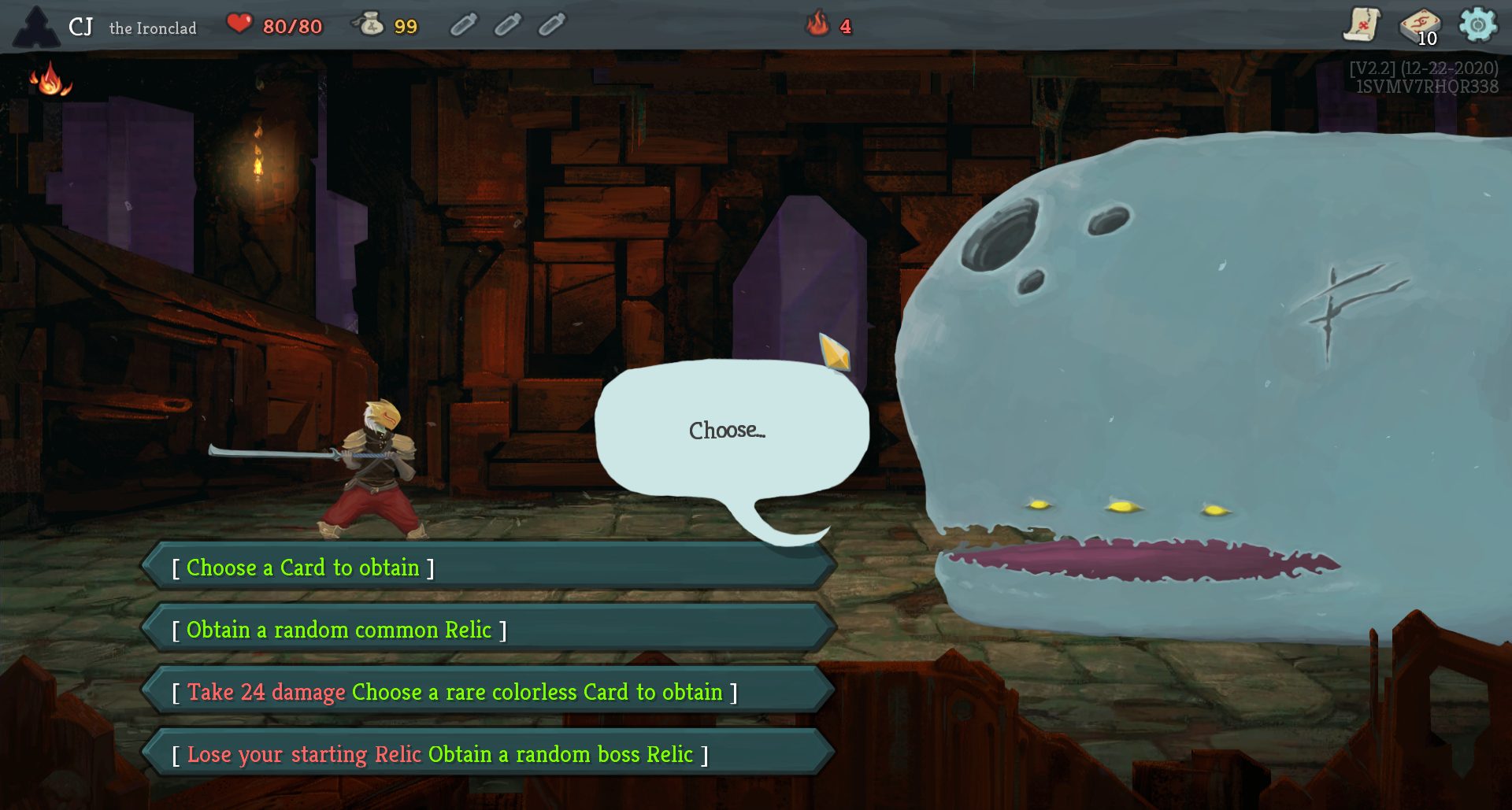 Early choices can dictate entire runthroughs. Lots of ways this appears in Slay the Spire:

In real life, there’s also an early factor that affects all of us, yet none of us can control: privilege. Being born an Asian male isn’t too bad, all things considered. Zip code determinism is a real and sad thing. My relationship with my privilege is something that deserves a whole blog post, but I always feel like I could be more aware of my own privilege. 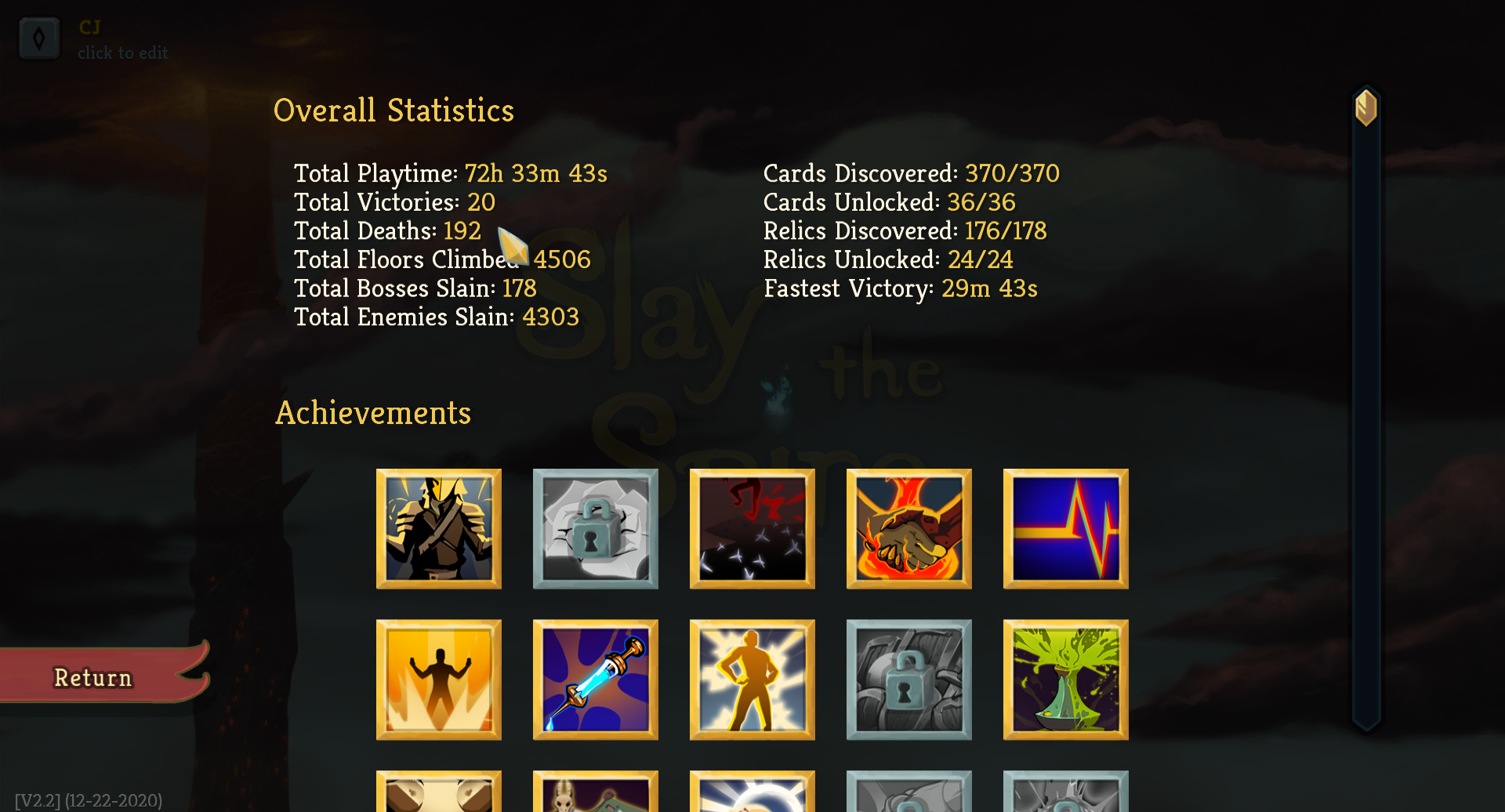 in my defense, a lot of these deaths were abandoning early on because i was trying to get a certain achievement. but im also not great at this game

Only after the tenth punch will you see the first, and only after the twentieth will you block it. This is one of my favorite go proverbs, and it definitely applies to Slay the Spire too. It means that you’ll probably get punished by the same mistake over and over before you realize it’s happening, and it’ll take a while before you learn to correct it. The solution, then, is to just keep playing.

I lost a bunch of my early Slay the Spire games. Now, I still lose a bunch of Slay the Spire games, but I’m playing at a higher difficulty now, so it’s satisfying in that sense, at least. You really can’t expect to win every game, and even the top streamers playing on the hardest difficulty win less than 75% of the time. (Except for, well, Lifecoach, who has like a 96% winrate with Watcher. Then again, for most streamers, Watcher win rate is like double their other characters’ win rates.)

As for how this applies to real life… well, whatever, I’m not going to lecture on the value of losing.