C'mon. You know what this entry is about. Check out the title! 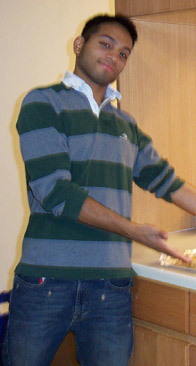 Akash is the president of the Class of 2009 (like someone else you might know). If you’re wondering what Akash is actually gesturing towards in this picture, hang on. We’ll get to that.

As I hope you all know, today was the premiere of a much-anticipated movie. What movie is that?

Harry Potter and the Goblet of Fire, of course!

One afternoon about a month ago, there was a knock on my door. When I opened it, Akash asked, “Hey Laura, do you have any bread?” Now I’m a friendly kid, always willing to lend the proverbial cup of sugar to a neighbor, but…I live in Burton-Conner (W51). Akash lives in Simmons (W79). That’s a pretty big neighborhood. That athletic field is a whole lot bigger than it looks on that silly little map.

It turns out that Akash was visiting Ann ’08, who lives in my suite, and had a sudden craving for garlic bread. It turns out that, after the freshman dinner, Meara left her garlic butter spread stuff sitting around my suite kitchen, and when Akash saw this, well, he just couldn’t get garlic bread off his mind after that, apparently. I presented Akash with a loaf of white bread, and he went to work: 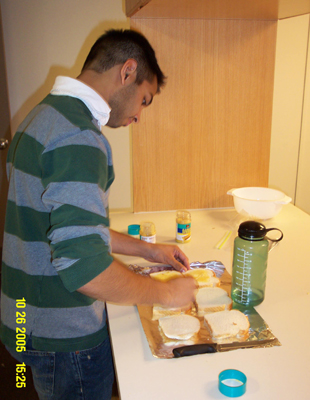 As we worked, Akash talked about his plans for the 2009 Class Council. “Well Laura,” he said, “I know you like Harry Potter. So I thought, ‘Hey, Laura’s an admissions blogger. She must be representative of the Class of ’09. If Laura likes Harry Potter, lots of ’09s probably like Harry Potter!’ So I think I’m going to put together an event for MIT ’09s to go to a showing of the new movie!” This is actually what he said. I take no responsibility for the flawed logic…

“Gee Akash, that sounds great!” I said. OK, so that’s not actually what I said. But something like it.

Anyway, Akash finished the garlic bread and kindly posed so that all of the prospective ’10s could admire his handiwork: 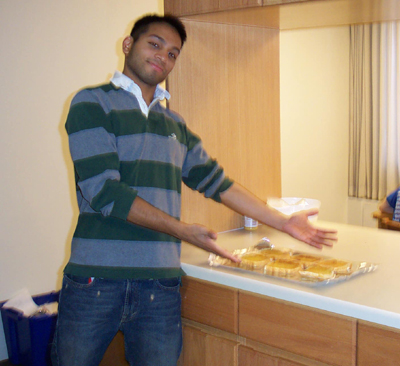 A few weeks later, when I heard that Akash’s plan had gone into action, I signed up right away.

That’s right ladies and gents, last night I saw Harry Potter and the Goblet of Fire three whole hours before anyone else! Mwahaha!

And it was SO GOOD!

Now don’t worry, I won’t spoil anything. I’d just like to say that it was absolutely fantastic and I loved every last minute of it. I think that (finally!) they did a great job adapting the book to a screenplay- obviously they needed to cut some things out in order to make a movie that was less than 6 hours long, but I thought they did a super good job. The way they edited pieces together made the whole movie flow really nicely in a way that was coherent and true to story (if not exactly like the book). I’m also glad they managed to include a lot of genuinely funny scenes to balance out all the dark content of this book- including both scenes from the book (Fred and George and the Age Line!) and original scenes as well (look for a good one with Harry, Ron, Hermione, and Snape!) The Triwizard scenes were tense, the graveyard scene was scary, and the teenage crush scenes were cute. I guess I’m biased because I’m a huge Harry Potter fan, but I absolutely hated the 3rd movie when it first came out (although it has started to grow on me). In any case, I give it 2 thumbs up. Loved it! 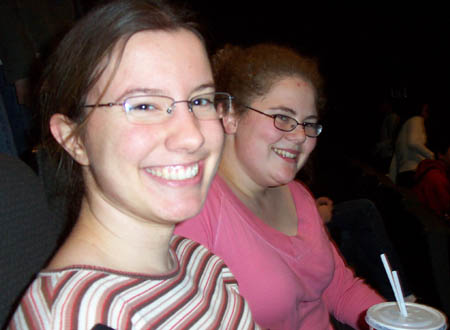 Meara and Adelaide waiting anxiously for the movie to begin.

Also, that clever ’09 Class Council held a costume contest and gave away free iPods to the winners! Luckily for me, the first place winner is in a couple of freshman core classes with me, so it was only moderately awkward asking her if I could take a picture of her to post on the Internet. Erica ’09 had the most awesome costume ever, so I’m really glad she won. I hope you get it immediately like I did, otherwise that just means I’m a huge dork. Oh wait…

And you know what the best part is? This wasn’t even my cool adventure of the week! More on that later!