Sometime late last night and/or early this morning I received a rather suspicious message from someone who would only identify himself/herself as “Jack Florey*,” telling me that rather interesting, picture worthy items had mysteriously appeared on and around the Little Dome, Lobby 7, and the Infinite Corridor. I take my blogger responsibilities quite seriously and hurried over to get pictures before things were taken down. Besides, what good MIT student isn’t up at 4 AM? (Dear Concerned Parents: we do sleep. Really. Just not during normal hours.)

*Jack Florey is the name of the fictitious character who often takes responsibility for mysterious things that happen at the Institute during the middle of the night. My clever little paragraph up there is just a cute way of saying that a friend of mine tipped me off about the hack, but publishing his or her name on a public on-line publication would be rather rude of me. Hacker types like to remain anonymous. Mostly because they’re usually doing something illegal, and also because it’s part of the Hacker Code of Ethics to never claim responsibility for hacks. Think about it- it really adds to the mystique of the whole thing if you don’t know that the kid sitting in front of you in 3.091 lecture was up all night rigging up clever practical jokes.

But I’m going to build up the suspense a bit longer, because there are 2 things I want to cover first. Number 1: I answered your questions in a separate entry. Read it all here.

Number 2: If you haven’t heard about the mail mix-up, read Ben’s post here and/or check out the discussion on collegeconfidential. Basically the gist of it is that the admit “tube things” were accidentally mailed earlier than the defer and reject letters, which really bites. I have no idea what this must be like for you guys; I can only imagine that it’s really frustrating and upsetting. Just hang in there and remember that it’s not the end of the world.

And now, to brighten up your day- on to the hack!

Mysteriously during the night, MIT was turned into…. 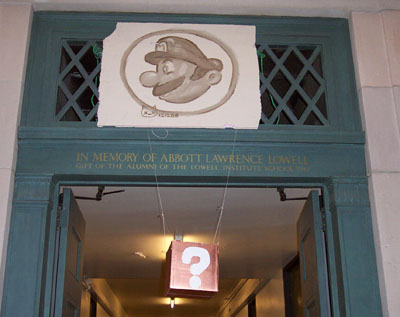 Read on for (lots!) more pictures.

The Infinite Corridor was decked out with many paper cutouts of those famous green pipes, clouds, rolling hills, and coins: 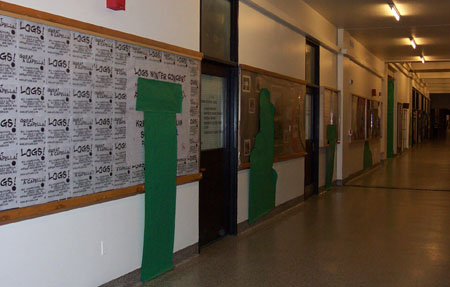 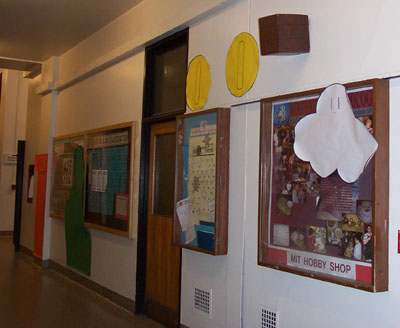 A kiosk in Lobby 7 that usually runs informational videos about MIT was now set up to play the original Super Mario Bros: 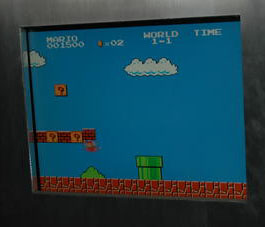 No really. Like you could actually play it. I did. =) 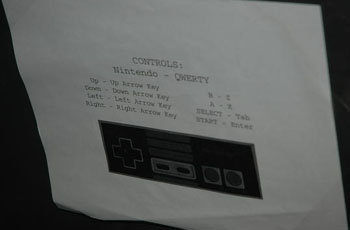 One of the Athena machines was showing a map of Super Mario 3: 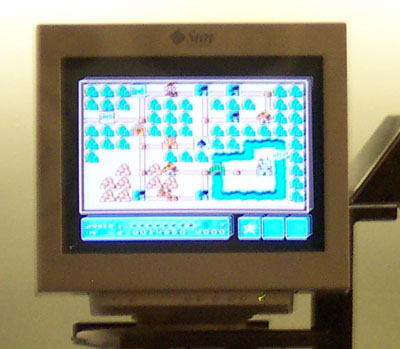 Somewhere down the Infnite there’s a projector that runs advertisments about student groups and actvities. Unfortunately the picture I took didn’t come out too well, but hopefully you can recognize that the hijacked projector was playing a Mario time trial: 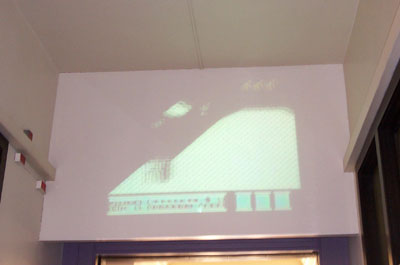 Some more scenery down the infinite: 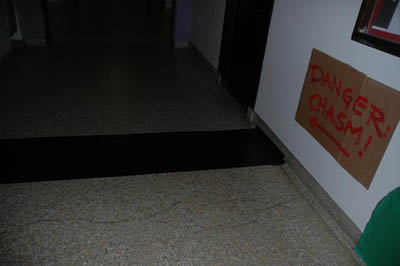 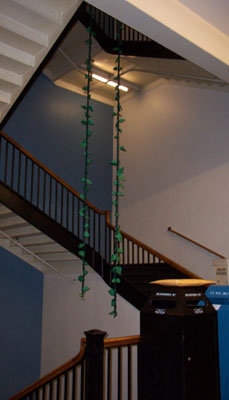 There was even a high scores banner in Lobby 7: 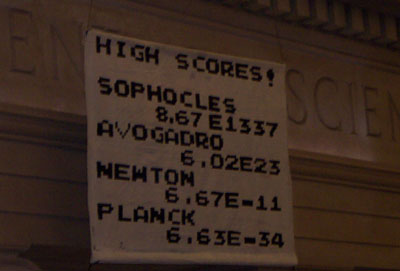 These characters each occupied the space above each of the four pedestals in the corners of Lobby 7: 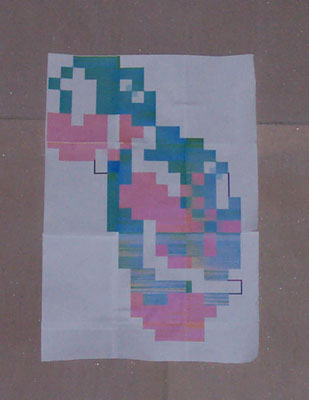 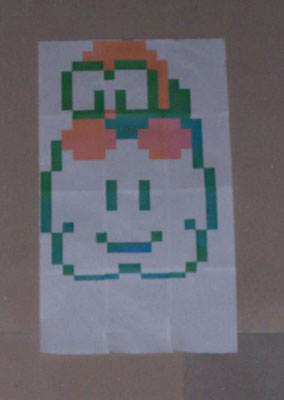 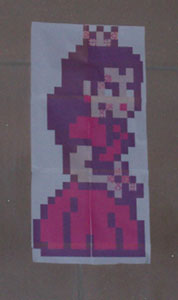 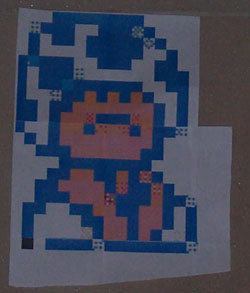 Some more elaborate characters were hung from staircases: 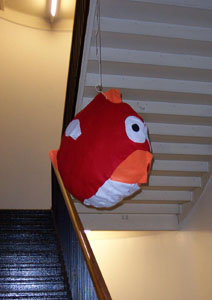 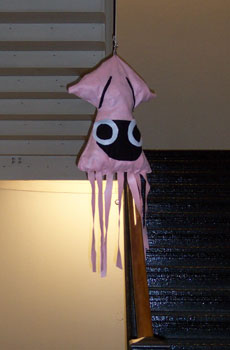 And this Mario was in Lobby 7: 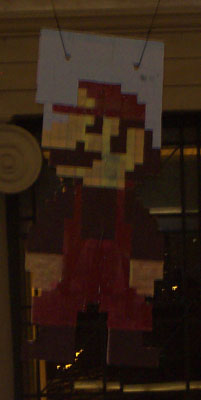 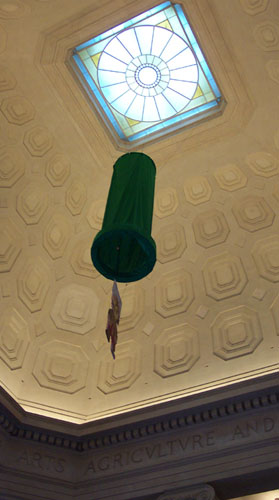 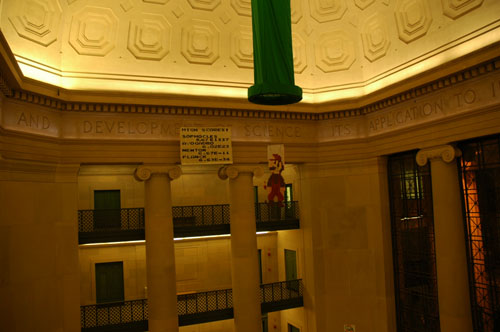 (This is such an awesome pic that I linked the thumbnail to larger version- check it out.)

And of course, what Mario level would be complete without the all-important triangular flag? 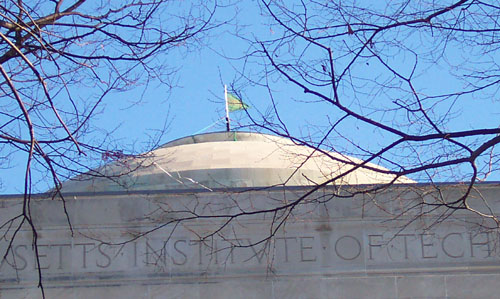 Unfortunately, one of the coolest parts of the hack was impossible to capture with a photograph. As I walked into Lobby 7, camera in hand, ready to document the hell out of MITMarioWorld, I was met with…music. The Mario theme was resonating throughout Lobby 7. It was. so cool. =)

Unfortunately, as Matt mentioned: poof. This hack disappeared rather quickly, which was sad. But it was still pretty darn awesome while it hung around.

Edit:
Many thanks to rcg, who graciously allowed me to borrow a few of the pictures he took. Like the really cool one of the pipe and banner from the 3rd florr. He’s awesome.

Also, many of the questions posed in comments have been answered here. Here’s a popular one, just for the record:
Lee Gearhart, ’76: Laura, thanks for posting this, with all the photos! While being a pre-Mario generation alum makes me miss some of the references, I certainly appreciate the planning, time, and effort that went into this. Your photos were well done, and help preserve that time and effort for other’s enjoyment.

To me, “Jack Florey” always meant Fifth East. Has the nomenclature evolved?
That’s a great point. Jack Florey definitely does refer to Fifth East, and Jim Tetazoo still refers to Third East, and there’s still ORK and THA and other old favorites, as well as some new ones like the WHO (Western Hacking Organization). However, in my experience, Jack Florey has always been the most famous in more mainstream culture. If you’ve heard of hacks at MIT, you’ve probably heard of Jack Florey. If you’re actually an MIT student, you know he’s not the only one. In fact, this particular hack involved people from all over campus. But since my audience here is actually prospective students, I used Jack Florey in hopes that the name might ring a bell for a few people.